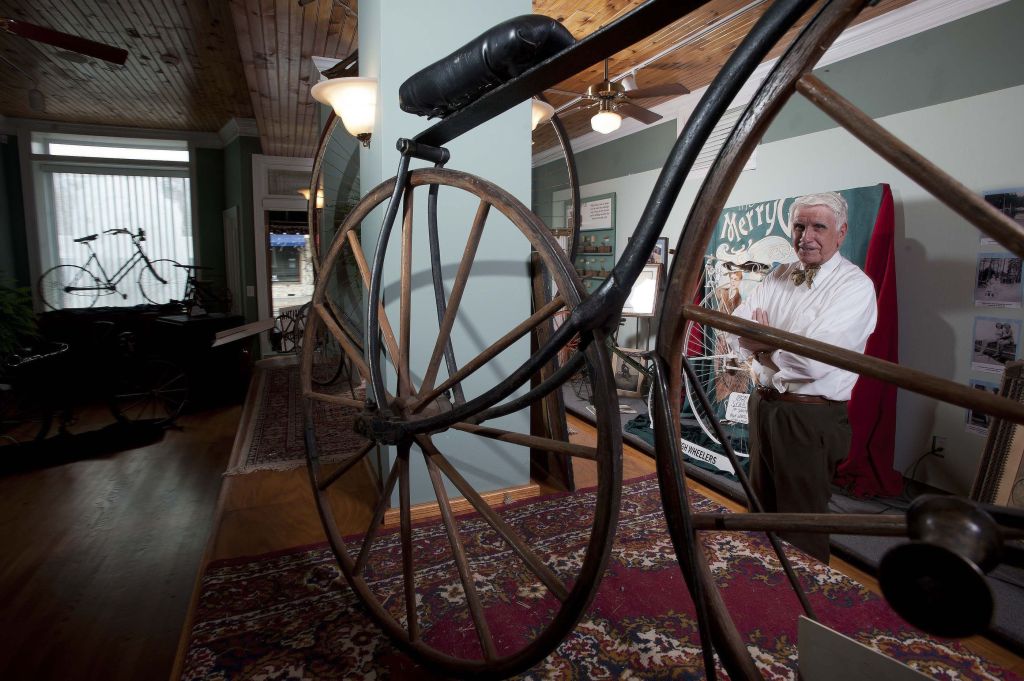 It’s hard to tell if he’s completely serious about that, but it’s easy to see he is passionate about those antique bikes. He owns nearly 100 of them and has shown them all over the country.

And throughout May, Farnan has put 17 on display at the Rockwell Museum for National Bike Month.

For this lot, “antique may be an understatement. Only a couple are even 20th-century machines. Most are from the 1800s.

“It’s kinda sorta the history of bicycles,” he says.

But first, a little of the history of the 80-year-old Farnan.

A native of Buffalo, N.Y., he went to college at the University of Southern California. There, he studied communications but fell “in love with a girl from the education department, so I jumped over there also.”

During a practice teaching stint, Farnan realized that wasn’t the vocation for him. So what did he do? “I became a magician, an actor, a song and dance man.”

He plied that trade over summer breaks at theme parks and worked venues in Boston and New York City, among others. He then learned a theme park was being constructed in his home town of Buffalo and that the people building it had never been to one. So he got in touch with them.

“The next thing I knew, I was president and general manager of the company,” he says.

From there, Farnan went on to do TV shows and later was hired to transform an Atlanta theme park into the first integrated park in the South. He bought a radio station. He started an advertising agency.

He eventually moved to North Carolina, where he worked for a company that decked out malls for Christmas. There, he met Linda Jones, who is now executive director of the Salisbury-Rowan Symphony Society. And that’s how he came to live in Rowan County.

Now, back to the bicycles. Sort of.

A company in Illinois had opened an amusement park in a Chicago shopping mall, and it was floundering. So they hired Farnan to turn it around. He did, and the company sold it to Six Flags.

It was during his time in Chicago, in the mid-1970s, that Farnan bought his first antique bicycle. It was an 1895 children’s model like one he has on display at the Rockwell Museum. He paid $300.

He’d been interested in antique bikes since seeing some in California during his time at USC in the late 1950s.

“They’re cool,” Farnan said. “And then when you understand the history of the bicycle, it’s pretty awesome.”

The first recognized bicycle, an 1817 German invention called a draisine — Farnan has a reproduction of one on display at the Rockwell Museum — let people get places faster than they could simply walking. They could get to those places even faster after a Scottish blacksmith added pedals and a crank in the 1830s.

Even so, it would be another three decades before bicycles really took off.

“Nothing happened with it until the French found out you could race it,” he says. “… Then they came over to the United States, and they found out, oh these were fun.”

And not just fun. When Farnan says early bicycles “were as important as the internet is” and had just as big an impact on the society of their time, he’s not kidding.

“The most important part was, it was transportation. People could get on a bike all by themselves and go someplace,” he says.

That was especially attractive to women, who had been confined to the role of housewife.

“It was definitely the beginning of a revolution for females,” Farnan says.

While the first bicycles mass produced in the U.S. had wooden wheels sheathed in metal — earning them the colloquial moniker “boneshaker” — their fast rise in popularity led to innovation.

Some of that innovation happened at the grassroots level, with people who couldn’t afford to buy a machine making their own, such as the bicycle made from a bed frame that a Chicago man rode to work daily for 10 years.

Some of it was borne of competition, which led to inventions like the big-wheeled bike that reach higher speeds. Farnan has those and a lot of other examples on display at the musueum of bicycles you might not recognize.

“I have four bicycles here that look like bicycles,” he says.

But most of the innovation came through improvements to the bicycles themselves, improvements that would later find new uses in advancing industries.

“Gears, ball bearings, pneumatic tires,” Farnan says, “all of these things came out of the workshops of bicycles.”

There’s a lot more to know about bicycles, their evolution and their importance. And Farnan says he’ll be around at the Rockwell Museum most evenings it’s open throughout the rest of May to tell it.

Even if you don’t catch him at the museum, get by to see the bikes. They are, as Farnan says, cool, and worth the visit.

And if you have a bike you think Farnan might have an interest in, or someplace you’d like him to show some of his bicycles, email him at buddyfarnan@excite.com.