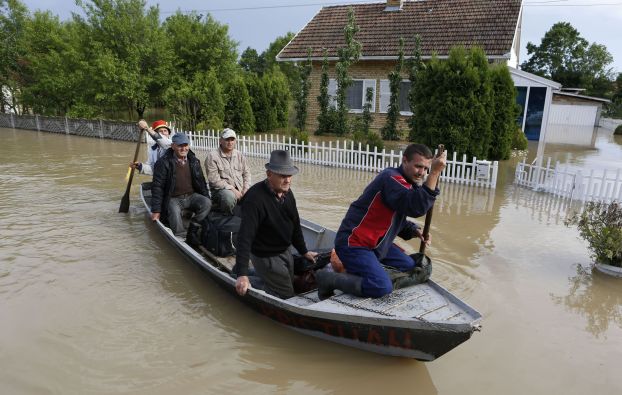 BRCKO, Bosnia-Herzegovina (AP) — Floodwaters triggered more than 3,000 landslides across the Balkans on Sunday, laying waste to entire towns and villages and disturbing land mines leftover from the region’s 1990s war, along with warning signs that marked the unexploded weapons.
The Balkans’ worst flooding since record keeping began forced tens of thousands of people from their homes and threatened to inundate Serbia’s main power plant, which supplies electricity to a third of the country and most of the capital, Belgrade.
Authorities organized a frenzied helicopter airlift to get terrified families to safety before the water swallowed up their homes. Many were plucked from rooftops.
Floodwaters receded Sunday in some locations, laying bare the full scale of the damage. Elsewhere, emergency management officials warned that the water would keep rising into Sunday night.
“The situation is catastrophic,” said Bosnia’s refugee minister, Adil Osmanovic.
Three months’ worth of rain fell on the region in three days, producing the worst floods since rainfall measurements began 120 years ago. At least two dozen people have died, with more casualties expected.
The rain caused an estimated 2,100 landslides that covered roads, homes and whole villages throughout hilly Bosnia. Another 1,000 landslides were reported in neighboring Serbia.
The cities of Orasje and Brcko in northeast Bosnia, where the Sava River forms the natural border with Croatia, were in danger of being overwhelmed. Officials in Brcko ordered six villages to be evacuated.
Rescuers urged people to go to the balconies or rooftops of their houses with bright fabric to make themselves visible.
Brcko Mayor Anto Domic said that unless the Bosnian Army is able to reinforce from the air, the city will be flooded completely. He called for the Defense Ministry to use helicopters to lower steel barriers that could be backed by sandbags to contain the water.
“It is a very demanding task,” he said, acknowledging that officials would have no other way to protect the port city of more than 70,000.
Civil protection commander Fahrudin Solak said the Sava River was spilling over another portion of the flood barrier in Orasje while emergency workers tried desperately to reinforce it with sandbags.
In Serbia, where floods have inundated towns and villages, authorities braced for high water that could last for several more days.
Serbian Prime Minister Aleksandar Vucic said Sunday that 12 bodies have been found so far in Obrenovac, site of the coal-fired Nikola Tesla power plant, Serbia’s biggest.
Parts of the plant and a nearby mine that provides its fuel were underwater.
Serbia’s state power company, EPS, said crews were doing all they could to prevent any further damage to the plant. Damage to the mine alone is estimated at more than $137 million.
Serbia’s energy minister, Aleksandar Antic, appealed to people to conserve power, calling the threat to the plant “very serious.”
The floods and landslides raised fears about the estimated 1 million land mines planted during Bosnia’s 1992-95 war. Nearly 120,000 of the unexploded devices remain in more than 9,400 carefully marked minefields. But the weather toppled warning signs and, in many cases, dislodged the mines themselves.
Beyond the immediate danger to Bosnians, any loose mines could also create an international problem if floodwaters carry the explosives downstream. Experts warned that mines could travel through half of southeast Europe or get stuck in the turbines of a hydroelectric dam.
From the air, the northeastern third of Bosnia resembled a huge muddy lake, with houses, roads and rail lines submerged. Officials say about a million people — more than a quarter of the country’s population — live in the worst-affected areas.
The hillside village of Horozovina, close to the northeastern town of Tuzla, was practically split in two by a landslide that swallowed eight houses. More than 100 other houses were under threat from the restless earth. Residents told stories of narrow escapes from injury or death.
“I am homeless. I have nothing left, not even a toothpick,” Mesan Ikanovic said. “I ran out of the house barefoot, carrying children in my arms.”
Ikanovic said 10 minutes separated him and his family from likely death. He carried his 7-year-old daughter and 4-year-old son to safety.
He said he had secured a mortgage and moved in just last year. “Now I have nothing,” he said. “Where will I go now? Where will we live?”
Semid Ivilic’s house in the lower part of the village was still standing. But looking up at the mass of earth and rubble that engulfed his neighbors’ homes, he said he was worried.
“Nobody is coming to help us,” he said.
The final person to evacuate a village near Brcko said he had lost everything he valued.
“I was the last one to leave,” said 72-year-old Anto Zuparic. “I left everything behind, my cattle and everything else. I do not know what to do. I am glad I won’t live much longer anyway.”
More than 10,000 people have already been rescued from the town of Bijeljina in northeast Bosnia. Trucks, buses and private cars were heading north with volunteers and tons of aid collected by people in cities outside the disaster zone.
The Bosnian Army said it had 1,500 troops helping on the ground. But many bridges have been washed away, leaving communities dependent on airlifts.
Helicopters from the European Union, Slovenia and Croatia were also aiding rescue efforts.
Large parts of eastern Croatia were underwater too, with several villages cut off and hundreds still fleeing the flooded zone in boats and trucks. Refugees were being housed in sports halls and schools, and aid centers were set up to distribute medicine, food, blankets and clothing.
In Serbia, more than 20,000 people have been forced from their homes.
———
Associated Press writers Aida Cerkez in Sarajevo, Marko Drobnjakovic in Veliki Crljeni, Serbia; Almir Alic in Doboj, Bosnia; Amel Emric in Brcko, Bosnia; and Sulejman Klokoqi in Horozovine, Bosnia contributed to this report.