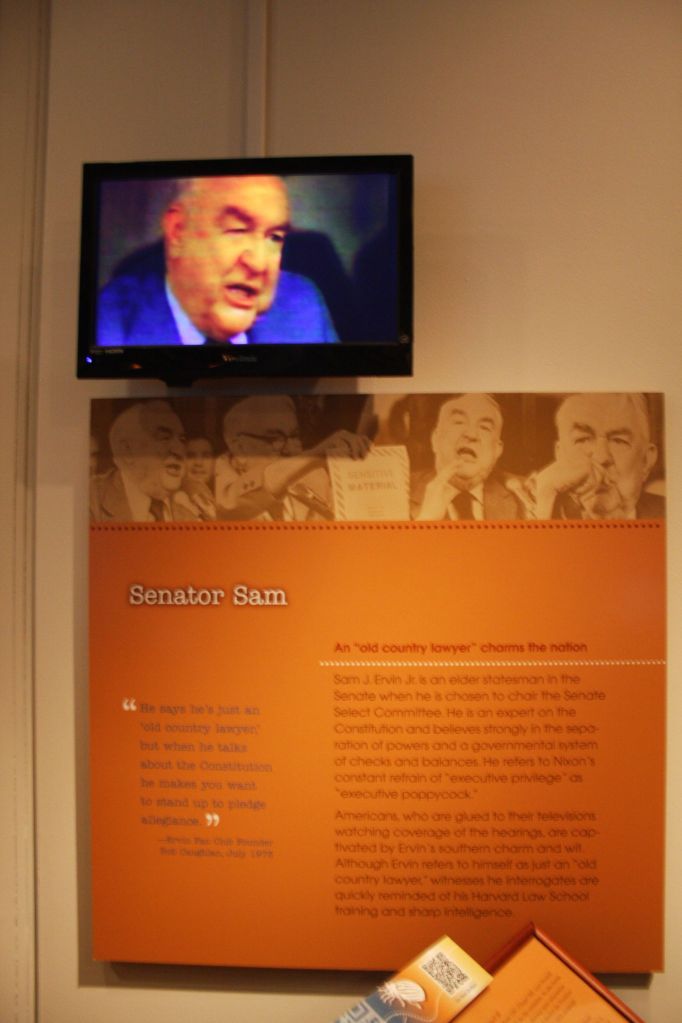 RALEIGH — If you happen to be in Raleigh this summer, be sure to stop by the N.C. Museum of History to visit its Watergate exhibit.
The exhibit is called, “Watergate: Political Scandal & the Presidency,” and is located in the museum’s lobby. It is not a large display, but one that is jam-packed with information.
Anyone who remembers the summer of 1973 remembers that the Senate Watergate Committee’s hearings droned on forever. You couldn’t watch your soap operas. It seemed as if only the hearings were on, followed by the news, which talked about the hearings. In those days, there were only four television channels, so literally, it was the only show that was on.
As it turned out, the Watergate break-ins were part of an attempt by President Richard Nixon to undermine the country’s political process, to insure his re-election in 1972. It cost him the presidency.
This exhibit delves into those hearings, which had a distinctive North Carolina flavor. The committee was chaired by Sen. Sam Ervin, who called himself an “old country lawyer” but who was in fact a brilliant constitutionalist. Rufus Edmisten was deputy counsel. A former N.C. secretary of state and attorney general, he is now an attorney in private practice.
The exhibit features clips of the hearings. Once you hear Ervin’s booming voice, his cadence and his tone, you never forget it. It’s a bit surreal to walk through, listening to Senator Sam ask all those questions. There’s even a corner with an afghan-covered sofa, TV tray and old television playing a loop of the hearing. We didn’t have TV trays, but my mom and I sat glued to the television like everybody else that summer. I was only 6, and I didn’t know exactly what was going on, but I knew something bad had happened.
We were sitting by the television the next summer, in August, when Nixon resigned. My mother — a Democrat then and a Democrat now — was crying. She just felt sorry for him. It was hard not to.
The exhibit walls are full of detailed information about all the players in the Watergate scandal. Many have died, including Nixon in 1994 and Ervin in 1985.
To me, some of the names on that wall — Dean, Haldeman, Ehrlichman, Mitchell, “the president’s men” — were as familiar as the names of my stuffed animals. Some little girls had Barbie dolls; I interviewed my stuffed animals.
It’s interesting that Watergate is remembered with such emotion even 40 years later. At the end of the exhibit is a place to post your own memories on index cards.
One young person wrote, “I didn’t understand it, but I thought it was cool anyway.”
The country is divided — much like 9/11 today — into two groups: one who remembers Watergate, and one who does not.
Even if you don’t remember it — or were a little too young, like me, to fully grasp it — the word “Watergate” still means something. It was the word that came to mean scandal. Add the ending “-gate” to a word and you’ve got a situation that’s run amok. But Watergate still is the first and biggest on the list.
The Watergate exhibit will remain on display at the N.C. Museum of History until Aug. 10, which is 40 years and one day after Nixon’s resignation.
For more information, visit www.ncmuseumofhistory.org.
Freelance writer Susan Shinn lives in Salisbury.