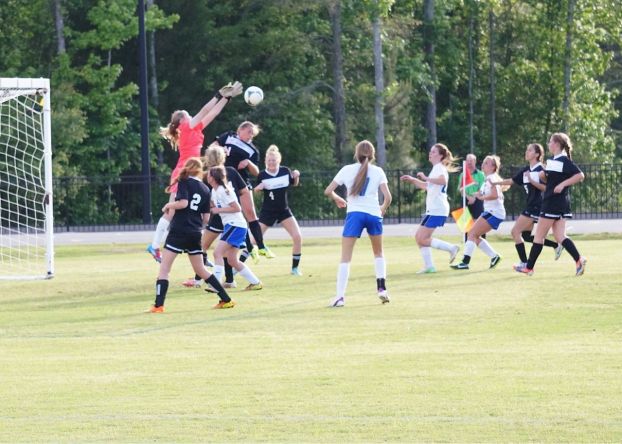 Staff report
HUNTERSVILLE — Salisbury’s soccer team upset Lake Norman Charter 2-1 on Saturday in the second round of the 2A state playoffs.
Lake Norman Charter is seeded fifth in the playoffs, but it has a plethora of talented players. Lake Norman Charter won 1A in 2013 and was ranked second in 2A heading into the match.
“The entire game was bizarre from inception to completion,” Salisbury coach Matt Parrish said. “It was originally scheduled for Friday night, but eventually moved to Saturday after a conflict was discovered involving the game field.”
Worried about the race traffic, the team left Salisbury at 3:30, enountered virtually no traffic and arrived at the field nearly 30 minutes earlier than usual.
“The girls were very loose but adjusted quickly and became hyper-focused during warm-ups,” Parrish said.
Lake Norman has two highly regarded players in midfielder Erin Iknayan and 39-goal-scoring forward Riley Kane.
“Both had to be accounted for at all times, so we decided to put sophomore Kathryn Rusher on Kane and freshman Nellie Brown on Iknayan. Both girls performed exceptionally well. I am so proud of their work under continuous pressure. It was the second consecutive big game for Nellie, who had the same task in the South Stokes game. It was the first time I’ve ever asked Kathryn to mark another player and she treated it like second nature.”
The first half saw an equal amount of possession and scoring chances but neither team could find the back of the net. Freshman Juliana Anderson made two big saves, one with her feet 5 yards outside of her box and one deflection wide on a long shot attempt.
On the offensive side of the ball, Salisbury’s best chances came off the left foot of freshman Katie Bullock.
“At halftime, I ran out of things to say with four minutes left, something that almost never occurs,” Parrish said. “I wanted us to be more physical and to continue to counter-attack when the opportunities presented themselves. It seemed at times as if we were hesitant to shoot, always looking for an extra pass in the offensive third.”
The second half began in the same fashion, with neither team gaining a significant advantage.
That changed with just over 13 minutes erased from the clock. In the 54th minute, Kate Grant took a pass from Ceci Cardelle and beat a defender carrying the ball across the top of the 18. She beat the keeper far post, side netting, to give Salisbury a 1-0 lead.
The next five minutes were chaotic.
“Defensive stalwart Susannah Dixon was fouled on a late tackle just outside of her box,” Parrish said. “Kane was yellow-carded and sent off, but we were without our most seasoned defender for the next 20 minutes. The tackle left a welt just above the shin guard off Dixon and I had to make spur of the moment decisions to revamp the defense. Ashlyn Heidt moved into the center back position and played magnificently.”
With just under 10 minutes left, Emma Labovitz was fouled in the box.
“I was chasing a ball on the other end and thought it was outside of the box,” Parrish said. “I called for a play and the girls yelled that it was a PK. With Susannah on the bench, I called for Heidt to step up. She has been our most consistent shooter in the last week of practice. Several weeks ago she told me that she loved taking PKs but then got hurt and I was never able to test her. She didn’t disappoint.”
Heidt converted the PK and the Hornets led 2-0.
Lake Norman Charter pushed the ball the final 10 minutes, forcing me to put Dixon back in the game and to mark the girl who had fouled her.
With six minutes left, Anderson gathered a throughball.
“We yelled for her to let us get out and settled,” Parrish said. The referee whistled her for stalling (unwarned) and awarded Lake Norman Charter with an indirect kick just outside the 18, with the clock stopped. LNC converted as Iknavan found the back of the net to cut the lead to 2-1.
Salisbury’s defense held on in the last six minutes, winning balls on corners and clearing the ball out of danger.
“We found a new level,” Parrish said. “Ceci ran balls to corners and killed clock beautifully, erasing half of the remaining time in a space no bigger than a car.”
When the final whistled sounded, an elated team crashed the field in victory.
“It was awesome,” Parrish said. “ We played with more heart and guts than any coach deserved tonight. I am proud to be their coach. This was arguably the biggest victory in the program’s 20-year history.”
Next up for the 12th-seeded Hornets is a home game against 13th-seeded Forbush, which knocked off No. 4 seed Franklin.

GREENSBORO — MyQuon Stout donned his ‘big meet’ straw hat and looked like he was about to go fishing at... read more