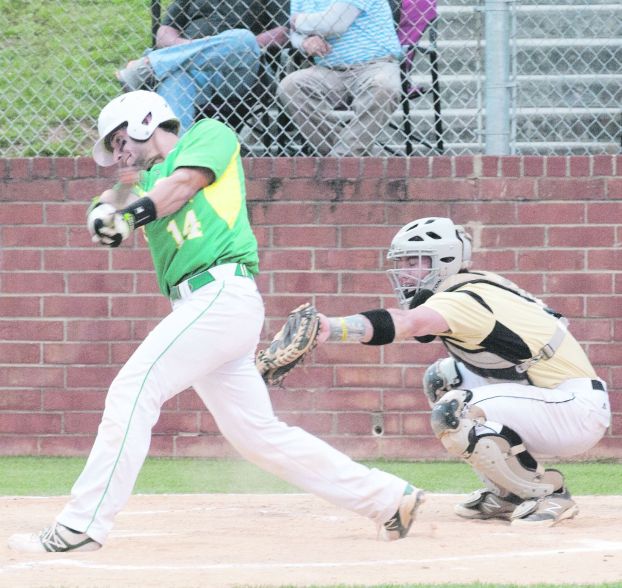 THOMASVILLE — North Rowan coach Aaron Rimer complained vigorously over a call in the seventh inning — but not about his team’s season.
“I can’t complain too hard about it,” Rimer said. “We came into it thinking we’d be starting eight freshmen and sophomores, so we did OK. Losing in the second round of the playoffs and fighting down to the last at-bat. Yeah, we did OK.”
An 8-4 loss to CCC rival East Davidson ended North’s season on Friday. North (10-15) lost to the Golden Eagles (17-6) for the third time.
“They’re the best team,” summed up North shortstop Jake Pritchard, who went 4-for-4. “They’re just real solid. They don’t hurt themselves.”
North sent junior Cory Fries, freshman Henderson Lentz and sophomore Lee Sells to the mound, a good indication that the Cavaliers’ future is brighter than the present.
“Watch out for North,” ED coach Dan Tricarico said. “With all the young guys they’ve got, Coach Rimer did a great job. They fought us.”
North hurlers managed to dodge big innings, but East Davidson put 2s and 1s on the scoreboard steadily with good baserunning and by taking advantage of defensive lapses.
“We didn’t back up our pitchers as well as we wanted to,” Pritchard said. “But we didn’t do a terrible job of hitting.”
North had eight hits, two by leadoff man Chance Mazza, but the Cavs stranded 10 and left the bases full in the fifth and seventh. East Davidson starter and winner Ryan McIntyre struck out North’s freshman cleanup hitter Javin Goodine to end the fifth when North was down 5-1.
“He’s a very good pull hitter,” Goodine said. “I tried to paint the corner away from him and I threw him a lot of curveballs.”
Nathan Campbell drove in three runs for the Golden Eagles, who won the CCC regular-season title. His two-run homer in the third gave the home team a 4-0 lead.
“We can play better and there were situational things we need to clean up,” Tricarico said. “But I was pleased with how we swung the bats.”
North scored in the fourth when Noah Gonzalez’s sac fly plated Pritchard, but the Cavs trailed 8-1 by the time they batted in the seventh against reliever Tyler Rhodes.
“Everybody went up to the plate battling that inning,” Pritchard said. “You don’t want the season to end.”
Two errors gave North life, and a ringing double by Pritchard made it 8-2.
After a walk to Gonzalez filled the bases, walks to Carter Thomason and Patrick Monroe scored runs.
Nick Williams saved it for the Golden Eagles. He got Brandon White to bounce to shortstop to end the game.
“Guys never gave up and we gave ourselves a chance a couple of times tonight,” Rimer said. “I thought we got better and better as the season went along, and that’s about all you can ask.”

GREENSBORO — MyQuon Stout donned his ‘big meet’ straw hat and looked like he was about to go fishing at... read more