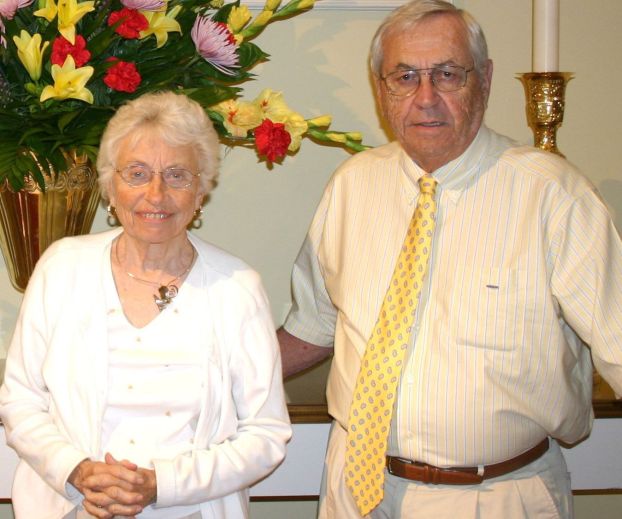 Ken Kolkebeck is a happy guy, and he’s a lucky guy. While most of us hope to get one meaningful chapter in the book of love, Ken has had two, and his story isn’t finished yet.
Ken and Nonnie were a day shy of celebrating 61 years of marriage when Nonnie passed away in 2009. He was devastated.
Ken’s three sons visited and called frequently, and they were lifesavers, he says. But still, he was lonely.
Some months after Nonnie died, one of Ken’s old shoe business pals called and mused about what had become of a work colleague named MaryAnn Duffy.
Ken didn’t know, but he soon found out. He and MaryAnn, who lived in Kentucky, began talking on the phone frequently. Eventually, she and Ken decided they needed to meet – for the first time in 17 years. They picked Raleigh as a neutral place.
“I’ll never forget the day she came down the escalator to the baggage area,” Ken says. “That face, that beautiful smile … I said to myself, ‘That’s for me if she’ll have me.’”
“After three days we both decided we should be together but maybe we should cool it for a month or so just to be sure,” Ken says. That lasted a week, and after a phone call, the two decided they should be together, as Ken says, “not to replace Nonnie but to start a new life together.”
“I can honestly say, as we start our fifth year, we have been happier than we ever expected,” Ken says. “At this age, I ain’t much of a lover, but boy can I snuggle. Now, going on 89, I hope the Lord hasn’t got a bed made for me yet and we can have a few more years together.”
g g g

Sue Davis has found a different kind of happiness through volunteering for the Bread Riot. Here is what she wrote:
“When you first began your column, I took time to think about what happiness is and what it energizes me to do. When a person is sad, learning is the best way to a new beginning. For some reason, the very act of exercising one’s curiosity brings joy. This works even when you are not sad.
“I found Bread Riot when Marianna Swaim mentioned the Winter Harvest program and the baskets of fresh produce she got each week. The following year, I joined the program and became active as a volunteer. Every week I learned more about greens, what they are and how to cook them without being boring. The first time I cooked collards, the result brought me joy and satisfaction.
“From there, I just got more curious about the farms in Rowan County and the people who brought nutritious meat, cheese, fruits and vegetables to the Farmers Market and to my home through their community supported agriculture. Getting to know these people, their families, their hardships and successes has rewarded me with smiles, laughter and happiness.
“Lee Menius from Wild Turkey Farms is so articulate it has made it easy to learn without even knowing I was learning. David Correll has been my teacher and helper on my journey. David has even helped me understand how the Rowan County Fair benefits the community and why being a part of it can make you happy.
“In 2014, learning expanded into understanding how a chef tackles feeding 400 people a farm-to-fork meal. Working side by side in securing food for Riot in the Pasture with Chef Jason Nain at Morgan Ridge Vineyards has been a learning and teaching time. We have been working on ‘Riot’ since late January. I cannot remember a single sad day during that time. Even with the horrible winter for the farmers and the late spring, there have been more smiles than frowns.
“The magic is in learning something new every day and using it to be successful in making others happy.”
What’s making you happy? We’d love to hear about it. Email salposthappy@gmail.com.

Clinic wants to spread the word to churches

The Community Care Clinic is reaching out to the faith community to make local congregations aware of its services. The... read more