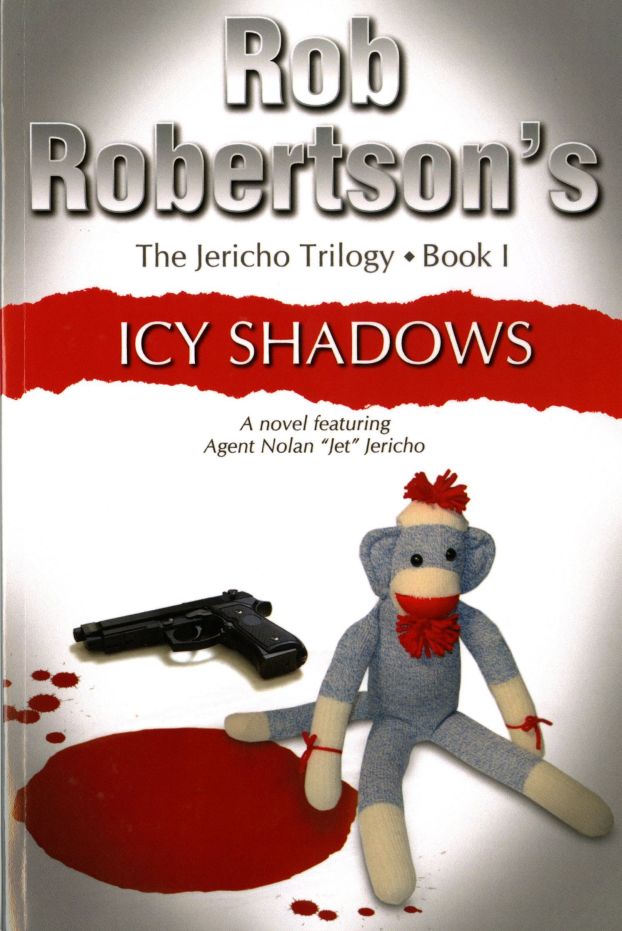 If you see a book cover featuring a sock monkey, a pool of blood and a gun, you have found Dr. Rob Robertson’s down-home mystery, “Icy Shadows.”

You may know him as Dr. Rob, an educator, musician and researcher who has worked in the field of gerontological music. You’d hardly think he was capable of the bizarre murder in the book. His hero is the nearly perfect melting-pot, well-built, Corvette-driving, tough-talking, cat-hating uber detective and “local legend” Nolan “Jet” Jericho. Jet is part African, part Puerto Rican, part Japanese and part Chinese American. In the opening chapter, the author writes “a person could throw a C- or D-battery at Jericho’s chest and it probably would bounce off about two or three feet.”

He has dual Corvettes, Polly and Anna, one blue and one red. His girlfriend is called Cat and has numerous cats named after presidents, such as Roosevelt and Kennedy. She is naturally brilliant and gorgeous and they can’t get enough of each other.

Women, who tend to be hot-to-trot in this story, continuously come on to Jet. He’s got to fend them off with various weapons. The other women are mostly spinsters. Not many women enjoy being called spinsters, but the book is set in 1972, when we were not politically correct or especially sensitive to each other’s feelings.

The action takes place in Icy Springs, N.C., the site of a previous Jet success in 1967. He travels to places like Monksville, so you may quickly make connections with real places. The good ol’ boy sheriff there, Walt Niblock, is by Jet’s side, even though Jet is an SBI agent.

One of Niblock’s deputies is a dumb blonde named Dreama Dobermann, and she can’t keep her hands off Jet. The murder victim is a Lutheran minister named Paul Christmas; his aging mother is named Mary.

At this point, it’s obvious Robertson is writing this 351-page book with tongue firmly in cheek. Jet’s boss in Raleigh keeps telling him “I’m gonna mail you out” to Icy Springs. Then he’s going to mail Cat out to assist him. Cat is an agent, too, but their relationship is hush-hush, because there’s rules about those sorts of things.

The attitudes are certainly from the 1970s, and much of the language, but there’s at least one anachronism. They shudder at the thought of someone smoking — the dead minister had a heavy smoking habit. In 1972, smoking was so ordinary and widespread, no one would have begrudged the Lutheran minister for lighting up. There was more than “Purple Haze” in those days.

Robertson, in a press release, calls the book a “novel of mystery and intrigue laced with action and spiced with equal doses of humor and romance.” It’s the first in a series he will call The Jericho Trilogy. Book two is the sequel, “The Blue People,” to be followed by “Gin!”

Robertson provided a question and answer sheet he did with himself, where he explains some of his motivation. He said he’s known for his creativity with language and he started a novel about a “gruesome murder occurring at a cotton gin in a rural North Carolina community.” He writes that his problem with that book was the first person point of view and he scrapped it. He started “Icy Shadows” in third person and it “simply poured out of me.”

His quirky characters come from bits and pieces of things he’s seen or heard and traits from a number of people he’s known. He does not sketch out drafts or outlines. “I let my characters ‘talk it out’ as events transpire in my head.” It turned out this bunch had a sense of humor. Still, Robertson wants it “to smack of realism.” He writes in one of his answers that the novel wrote itself as the characters exchanged dialogue in his head. “I felt more like a reporter than an author,” he writes.

Robertson says he loves the editing process, working with an editor in Connecticut by email. He also loves speaking to youth about the joys of writing. He writes that his chief inspiration for writing is Stephen King, and that Fred Chappell, poet, author and teacher at the University of North Carolina at Greensboro, was a big influence.

And what’s up with the sock monkey? Well, you just have to read the book.

Robertson will sign books May 24, 11 a.m.-1 p.m. at Literary Bookpost and Just The Thing, 110 S. Main St., in downtown Salisbury. The book is also available at online retailers and www.warrenpublishing.net.

This weekend is the last chance to catch the 6th Annual 10-Minute New Play Festival ‘Office Hours.’  Performances of these... read more