Good food, fellowship at Wake Up with Waterworks breakfast 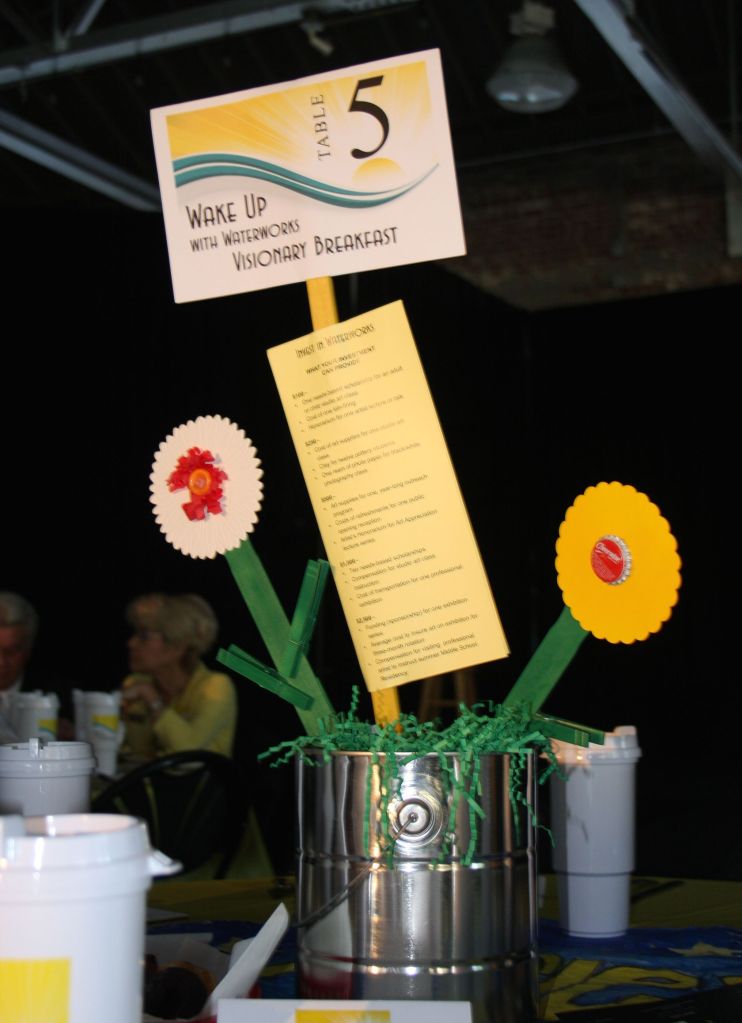 Waterworks Visual Arts Center’s mission is to provide opportunities for all people to experience art.
All people.
That includes young students who have no support to express themselves. That includes people in special populations who are often overlooked in the community. Likewise, it includes homeless people who find self-esteem and hope in twice monthly art classes.
These stories and more unfolded Thursday morning, May 8, during “Wake Up with Waterworks,” the museum’s second-annual visionary breakfast.
Thirty table captains gathered some 200 supporters to the early-morning event. The program was ably handled by Dr. John Wear, Catawba College’s executive director for its Center for the Environment.
Wear admitted attendees were probably thinking, “What the heck is he doing up there?”
Truth is, he said, “I believe in the mission of Waterworks Visual Arts Center. Most of the people I come into contact with at the center have an intrinsic love of beauty we find in nature.”
Such an appreciation, he said, can translate into art.
Anne Scott Clement has spent the past seven years as Waterworks’ executive director.
The museum was founded April 1, 1959, as the Rowan Art Guild. In 2013, Waterworks welcomed some 21, 000 visitors, that included 800 schoolchildren, 6,000 youth, 300 special populations folks and 2,000 fifth-graders. All on a budget of less than $325,000, Clement noted, a budget which has not changed much in the past 11 years.
As with any non-profit, Waterworks too has faced challenges in a tough economy. Yet some 57 adult and student volunteers last year logged 1,250 hours, the equivalent of $23,500.
Clement said it warmed her heart to see a busload of fifth-graders enter the Stanback Gallery on visits, or a young person burst with pride at creating art. A homeless woman told her the visits to Waterworks “are the only times she feels like a real person.”
For some visitors, Clement said, it’s their first or only experience with art.
“Your support and involvement is vital to uphold our mission and achieve our goals,” she told the audience.
Following a short video, three women whose groups partner with Waterworks passionately endorsed the museum.
Jenn Selby, program chair of Rowan Cabarrus Community College’s Department of Fine Arts, remembered visiting the museum as a student. It gave her confidence and enthusiasm to pursue a career in art, she said. “Yes, it is a real career path. It’s OK.”
It also taught her how to be a collaborator. “It really has made me who I am today.”
Waterworks also helped her grow professionally, she said. “Now I bring my students here. Having an accredited museum is a big deal. It is a coveted relationship between an art department and a museum, and it is an extension of my classroom.”
For one of her students who is himself pursuing a career in art, “Waterworks gave him emotions he could not previously express. He told me, ‘For the first time in my life, I felt I had a voice. Art hasn’t changed my life, it’s given me a life.’”
M.T. Sidoli has worked with special populations for the past 28 years, and has taught at Waterworks for more than a decade.
“My students love coming to Waterworks,” said Sidoli, whose enthusiasm is contagious. “For them, it is a special event every time. During every class, something magical happens.”
She repeated that sentence for emphasis.
She also spoke of working with a client who has cerebral palsy, and the joy he found in creating art.
“These interactions are what feed me,” Sidoli said. “They feed my soul.”
Sidoli said this population is “virtually invisible” to the community, yet are as deserving as anyone to participate in Waterworks programs.
“My students’ lives are enriched immensely,” she said.
Lastly, Kyna Grubb spoke about the “robust and holistic” art experience at Waterworks for participants in RHM’s New Tomorrows program. Grubb is RHM’s executive director.
“Our guests learn about art and the opportunity to create art,” she said. “I have seen self-esteem, work ethic, community connections, creativity and hope. They have two hours for creativity and can dream of a better future.”
Grubb said that one guest, Rodney, took a Waterworks art class in 2012. Since then, he’s received a scholarship to attend a class on landscape painting and he’s nearly completed a class in Web design at RCCC.
“Art transforms,” Grubb said. “His life has been transformed through art. That’s just one story. There are many more stories to tell.”
The stories told Thursday morning were designed to appeal to attendees’ hearts and their wallets. Nancy Wyrick, Waterworks president, asked all attendees to make a donation before they left.
“I just love this place,” she said. “I hope by now you know why.”
Clement said the next day that the event had raised $25,000.
For more information about Waterworks, visit www.waterworks.org