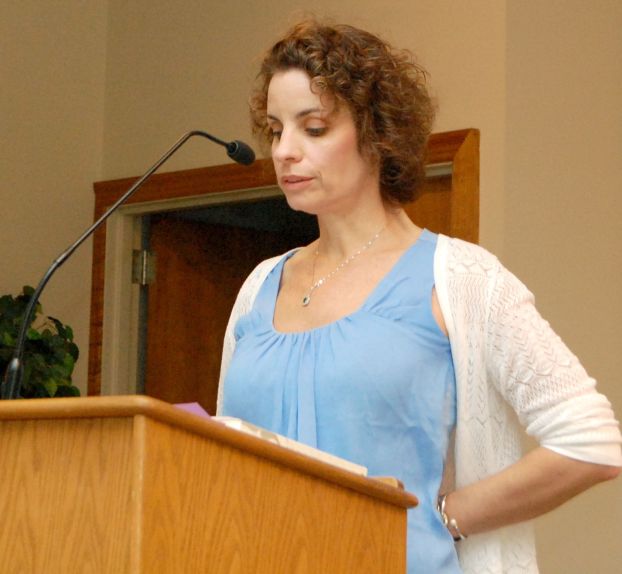 Susan Tekulve, the author of “In the Garden of Stone” is nearing the end of her promotion for her first book because it’s time to work on her next book. She stopped by the recent Rowan Reading Rendezvous, sponsored by the Friends of Rowan Public Library, to talk about her published book and read from her newest book.
Tekulve was inspired by her great aunt’s stories of her grandmother’s and grandfather’s families. The author’s grandfather was one of 21 children, and Tekulve said the boys stuck around and found hard work as sons of immigrants. The girls all left. One joined the army. “They were tough women,” Tekulve said. Her work is full of stories about women who endure tough circumstances.
Tekulve, who teaches at Converse College in Spartanburg, S.C., told about the circuitous route she took to tell family stories in fiction.
Her grandfather emigrated from Italy and became a teetotaling Methodist in order to marry his wife. They labored in the bottoms — river bottoms — of Ohio. But her family had long since left Ohio, so Tekulve didn’t feel a connection. She went to Italy to do “a lot of research” and traveled the country far and wide — her family is from Palermo. “And I couldn’t figure out why anyone would leave Italy,” except of course, the economy of the time was the worst in Europe.
“The whole setting in Ohio had been cemented over.”
Next, she traveled with her poet husband to West Virginia and heard stories from her mother-in-law and father-in-law, stories of tremendous hardship. Her father-in-law told her stories about coal miners and his moonshine route. Later, she went on a mining tour in southwest Virginia. There, she saw cemeteries filled with Italian names and she felt a connection with the landscape and the continued hardships of the land.
Now with two sets of stories and place to set the novel, “a strange alchemy happened. … The plot started springing from the place.”
The book covers generations, from the 1920s to the 1970s, using alternating points of view.
“Most of the women in the family married immigrants,” the author said, including her grandmother.
Answering a question from the audience, Tekulve said place is the common thread that holds the stories in her book together.
“I don’t think the book is through with me yet.” One of the peripheral characters is going to be the focus of her next book and she’ll have the not-so-tough job of going back to Italy to do more research. She’s even going to set the book there.

This weekend is the last chance to catch the 6th Annual 10-Minute New Play Festival ‘Office Hours.’  Performances of these... read more