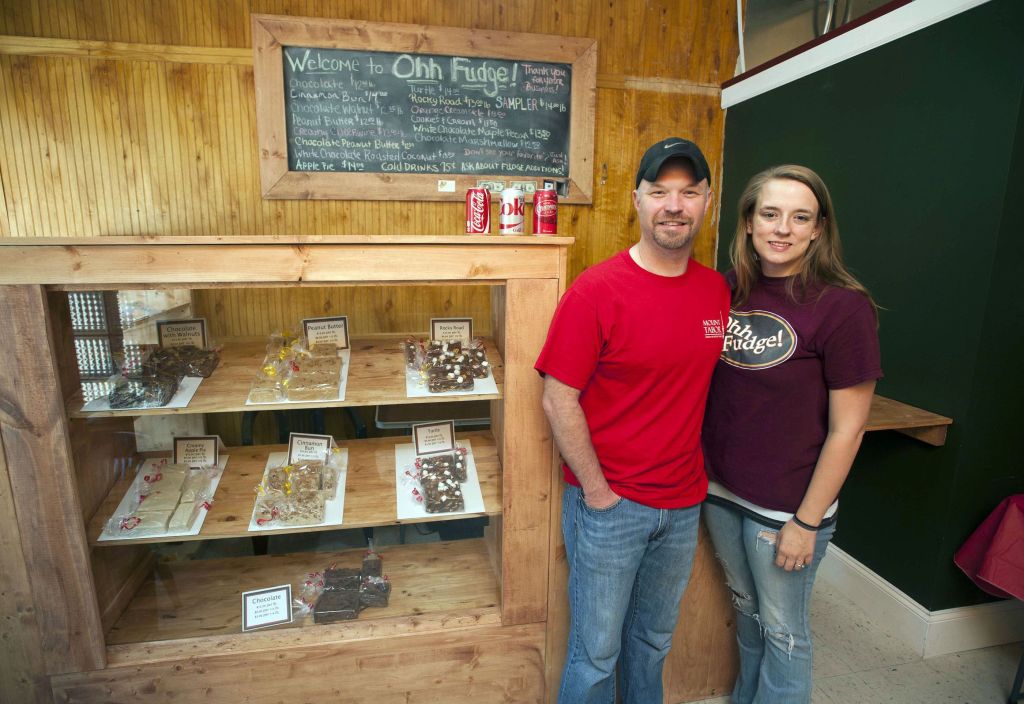 FAITH — Let’s talk about the name first.
Remember the scene from the 1983 movie “A Christmas Story,” when Ralphie is helping his father change a tire?
During the process, the lug nuts go flying into the night, prompting Ralphie to shout “Ohh Fudge!” (Only he confesses as the adult Ralphie narrator that he didn’t exactly say “fudge” and ended up with his mouth being washed out with soap.)
Well, Amanda Holshouser has named her new shop at 113 N. Main St. in Faith “Ohh Fudge!” and it comes with a perfect little slogan:
“We have Faith in our fudge!”
Everything apparently is done with exclamation points at the new shop, where Holshouser can make upwards of 40 different kinds of fudge and is always experimenting with more.
It’s all about fudge for Holshouser. She’s at the shop meeting customers and cooking new batches of fudge from 11 a.m.-8 p.m. Monday-Friday and 10 a.m.-8 p.m. Saturday.
“And it doesn’t stop when I get home,” she adds of thinking about fudge and how she can make it better.
Oh Fudge! is located in the granite storefront that used to house McCombs & Co.’s pimento cheese shop. Out front, Holshouser has a huge, custom-made, pine display case.
It holds all manner of fudge in quarter- half- and one-pound blocks. On a recent day, Holshouser had wrapped and put on display creamy apple pie, cinnamon bun, rocky road, key lime pie, turtle, white-chocolate-roasted-coconut, orange creamsicle, creamy Cheerwine, peanut butter, chocolate and white-chocolate-maple-pecan fudge.
She makes them all — and other specialty flavors — in a back kitchen. Holshouser hovers over large pots where the three starting ingredients for any fudge are sugar, butter and evaporated milk. After that, her creativity kicks in.
The concoctions are poured into rectangular, stainless steel molds of varying sizes where they cool on granite and marble before being wrapped up.
The place smells pretty good.
Holshouser’s personal favorite?
“I always go back to rocky road because you get the salty and the sweet,” she says.
A single mother, the 24-year-old Holshouser has bitten off a lot in pursuing her dream of being in business, answering only to herself and hoping to build something she can leave to her children.
Her biggest supporter is fiance Jonathan Harbinson.
“I don’t want her to look back in regret,” he says.
Together, they have three children. Harbinson has 6-year-old twin boys, Cole and Bryce, and Holshouser has a 4-year-old daughter, Ady.
Holshouser met Harbinson almost two years ago when she was selling cars for Team Chevrolet.
She sold Harbinson a used Ford truck, though she tried desperately to steer him toward a new Chevrolet. A few weeks later, he asked her on their first date, and a romance bloomed.
By the way, Harbinson came up with the name “Ohh Fudge!”
“He has seen ‘A Christmas Story’ a little bit too often,” Holshouser says. “If he could have done a ‘Star Wars’ reference, he would have done that.”
Holshouser first started making fudge as a 16-year-old. She began with peanut butter, went on to chocolate, then started experimenting with different ingredients and flavors.
She found she had a knack and always amazes Harbinson in that she never measures anything, except for the sugar. She also eschews a timer because she knows the crystalline consistency she’s after.
Holshouser nailed, for example, the cinnamon bun flavor on her first try, and people often ask her to try new things for them.
“Generally, I can come up with it,” she says. “… I never tell them ‘no.’ It’s ‘yes,’ or ‘I’ll try.’”
Harbinson’s choice is raspberry cheesecake, which is one of her most expensive fudges at $14 a pound.
“That one is out of this world,” he says.
Holshouser grew up on Castor Road not far from Faith. She attended Faith Elementary School and graduated from Carson High School in 2008.
She first became serious about making fudge when she was pregnant, partially bedridden and looking for ways to earn extra income.
Holshouser worked out of her home then and started calling her fudge “Ady’s Edibles,” in reference to her daughter. But she later returned to waitressing, separated from Ady’s father and went on to selling cars.
At Harbinson’s urging, she decided in February to plunge into the fudge business full-time.
“It’s what I wanted to do as long as I can remember,” Holshouser says, “and I’m good at this. … When I got divorced, I started life over.”
The town of Faith also seemed as though it were the perfect place — for her, her specialty and a start-up business.
“We love the town,” Holshouser says. “Faith fits us.”
Harbinson says it was kind of eerie how things all fell into place, and everyone was excited about Holshouser’s venture. Customers simply like having a homemade fudge shop so close, she says.
“We keep hearing they don’t have to go to the beach or mountains any more,” Holshouser adds.
With all the fudge being eaten in Faith these days, Holshouser and Harbinson joke that the store should sell gym memberships with the confection. Holshouser says they personally dine on a lot of grilled chicken and pork chops with steamed vegetables as a way of battling the bulge.
Ohh Fudge! opened April 21. Besides selling blocks of fudge, the store also has platters, party favors and samplers. Holshouser says she sold seven party platters for Mother’s Day.
“We’ve had great response from everyone,” Holshouser says.
For now, she doesn’t think about growing the business, moving some place else or expanding what she has to offer product-wise.
“My thing is the fudge,” Holshouser says. “It’s named after the fudge. That’s what we do.”
And it tastes much, much better than a bar of soap.