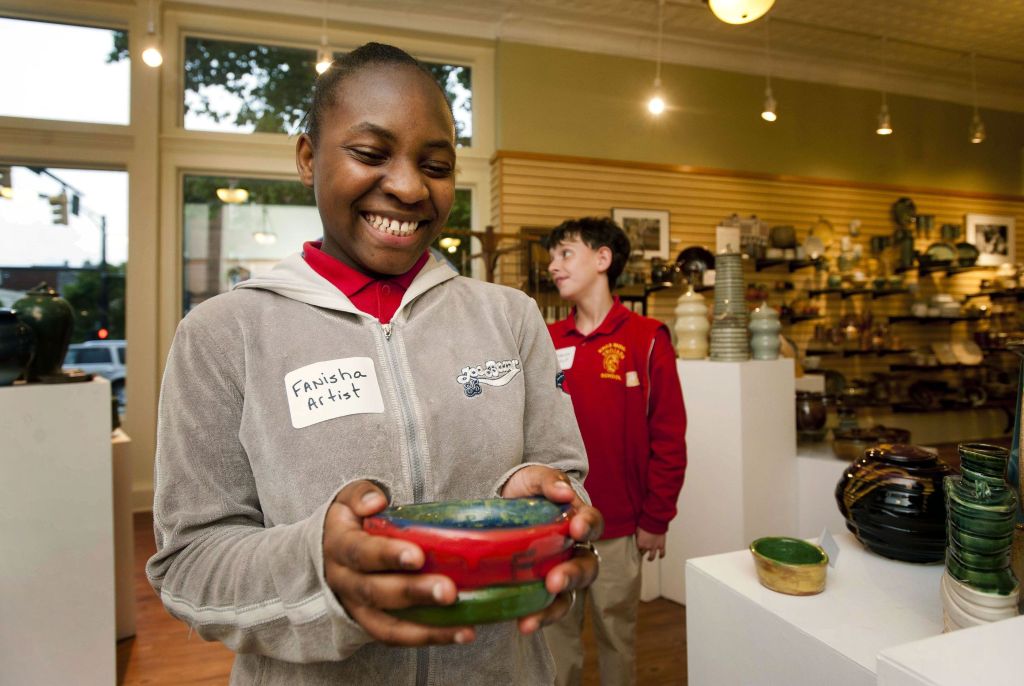 SALISBURY — Fanisha Anderson, a Knox Middle School sixth-grader, smiled broadly while showing a dish she made during the Barnabas Connection after school program.
Dad Jose Winecoff said the program gave Fanisha something to do.
“It keeps her mind …,” Winecoff started.
“… occupied,” Fanisha said, finishing his sentence.
The Barnabas Connection came to an end for the 2013-14 school year this week amid glazed pottery, celebratory cake and proud smiles.
But the faith-based program has forged connections and instilled ideas that organizers believe will impact students for years to come.
“It’s a work of God,” said Phil Wertz, a guidance counselor at Knox Middle School. “It really is.”
Aimed at Knox students, the program started seven years ago as a joint project involving St. John’s Lutheran Church in downtown Salisbury and Save Our Students, part of Youth Services at the time. Budget cuts in 2009 brought Save Our Students to an end, but St. John’s carried on, and Wertz stepped in as the school liaison.
Each Thursday afternoon throughout the school year, about a dozen Knox students chosen by teachers have spent the hours from 3:30 to 5:30 at St. John’s with adult mentors and artists.
“The goal of the program is to give students a chance to shine in a variety of art,” said Wertz, “and also a chance to form good relationships with classmates and caring adults.”
They started each week’s session seated in a circle for a character-based devotion and a time of sharing. After saying grace, they ate in the church fellowship hall and then were joined by an artist for that week’s lesson.
The students did everything from build Pinewood Derby cars to learn cartooning and paint a new outside sign for Knox — in the style of Mondrian, no less. They made Christmas ornaments, learned about stained glass, weaving and more.
The grand finale was a turn at the pottery wheel to create a small dish. The end products were on display during a reception for parents, mentors and students Thursday at Pottery 101, owned by one of the mentors, Cheryl Goins.
“It’s been a joy,” Goins said.
Mentors come from inside and outside the church and do not have to have any experience with art.
Shirley Ritchie, a member of St. John’s, helped start the program seven years ago. She said inspiration for the Barnabas Connection came from Libba Willingham, and the program got started with the help of the Rev. Jennifer Ginn.
Salisbury City Council recognized the program in 2009 as a positive initiative for youth in the city. Ritchie told council members it often seems that the adults gain as much or more from the program as the students, who give it high marks.
In the Bible, Barnabas was an encourager, introducing and recommending the newly converted Paul to the Christian community. The mentors are encouragers, too.
“I love working with youth,” said Dave Roof, a retired chemist who has been a Barnabas Connection volunteer from the start. “I think the really neat thing is it gives you a chance to spend time with them individually.”
Sixth-grader Abimael De La Sancha said he always got excited when it was time to go to Barnabas. “I feel like I’m actually using my time,” he said. He likes being able to “do something that will get appreciated.”
Abimael said he will continue to practice drawing, and dreams of someday becoming a doctor, soccer player or artist.
Shawn Blythe’s father and grandfather said the Barnabas group was good for Shawn.
“It gives his mind a different challenge, instead of video games,” dad Chris Blythe said. Shawn declared the program “awesome.”
Students Abby Thomas, Sylvester Foster and Clarence Brownell were recognized for sticking with the Barnabas Connection during all three of their years at Knox — grades 6 through 8.
Abby’s father, Michael Thomas, said the continuity was good for her. Abby saw principals and teachers come and go at Knox. “It’s probably been the one thing through her middle school years that has been the most consistent,” he said.
He likes the spiritual side, Michael Thomas said, though he added, “I’m not sure it’s as important to her as it is to us.”
The program has also been important to Wertz, who has missed only one session in four years.
“It has been an incredible blessing to be part of Barnabas,” Wertz said. He saw relationships grow and talents and gift come alive. That and knowing the students were enjoying “a safe time and place” were priceless, he said.
“It is like a cool drink of water to us (Knox) when we are thirsty,” Wertz said. “It is impossible to fully express my thankfulness to Shirley Ritchie and the faithful adults who are there to spend quality time with us week after week.”