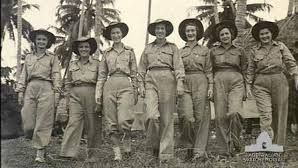 The great war of World War II had many unsung heroes that often fail to get the recognition they deserve. Whether it is the bravest soldiers, truck drivers, tank drivers, or pilots, many did not get the awards due to them. For this I am sorry. Their sacrifices were many and their rewards were few, but they carried on with the quest to defeat the enemy and keep America free.
Those brave nurses were no exception. Mothers, wives and daughters who left the security of their homes to help keep wounded American soldiers alive should often be remembered for their compassion and expertise of being a skilled nurse.
How many of these heroes, while assisting the doctors (also heroes on their own) often thought that the soldier on the operating table could be their husband, father, son or brother? It had to take a toll on their lives, and keeping their emotions in check must have been difficult. But nevertheless, nurses exceeded all expectations required of them.
During the attack on Pearl Harbor, only 1,000 nurses were in the Army Nurse Corps. That number quickly increased to more than 59,000 answering the call to help. To the credit of our military leaders, field hospitals sprang up all across war zones, providing a quick extraction of wounded soldiers to medical care. As a result, only about 4 percent of soldiers died from their wounds, and with 671,846 wounded, the lives saved were astounding.
Doctors were overwhelmed with the numbers of injuries. So many, in fact, they could not keep up, so nurses were trained in skills that would keep soldiers alive until seen by the doctors. Nurse anesthetists were in short supply, so the Army set up a six-month course to teach them how to administer inhalation anesthesia, blood derivatives, oxygen therapy and how to prevent shock. They were also trained on how to help soldiers deal with psychiatric patients, some 400,000 of them.
Nurses also had to live in the field tents with little hygiene care and no luxuries, but as they kept focus on the wounded, they were surrounded by support of others. As injuries increased, nurses became more skilled, showed less emotion and saved thousands of lives. Each field hospital handled an average of 125 patients who were categorized by the extent of their injury, often moving the most severe to field hospitals further back from the front lines. Nurses did it all, from holding flashlights for doctors over operating tables to helping transport soldiers to more secure locations and keeping the wounded focused on home and family, increasing their hope for survival. They were the workhorse of rear-echelon care.
Nurses were stationed in Sicily, southern Italy, Anzio, the European and Pacific theaters, and the China-Burma-India theater. They landed on Normandy beaches four days after the invasion. They went everywhere needed and never complained. What heroes they were.
Sadly, they were not immune to death because of their greatness. Overall, 201 nurses died from enemy fire, Japanese suicide plane attacks or weather-related vehicle crashes. To their credit, nurses received 1,619 medals and citations. At the end of the war, nurses returned home and were eligible for G.I. Bill education rights and many went on to become experts in the medical field.
I think it’s fair to say America owes a deep gratitude of thanks to nurses of all wars. For without them, many more brave soldiers would have died. Let’s not forget their deeds and hope they are at peace with knowing they gave all to protect some.

Rodney Cress is a Vietnam veteran and longtime advocate on veterans issues.