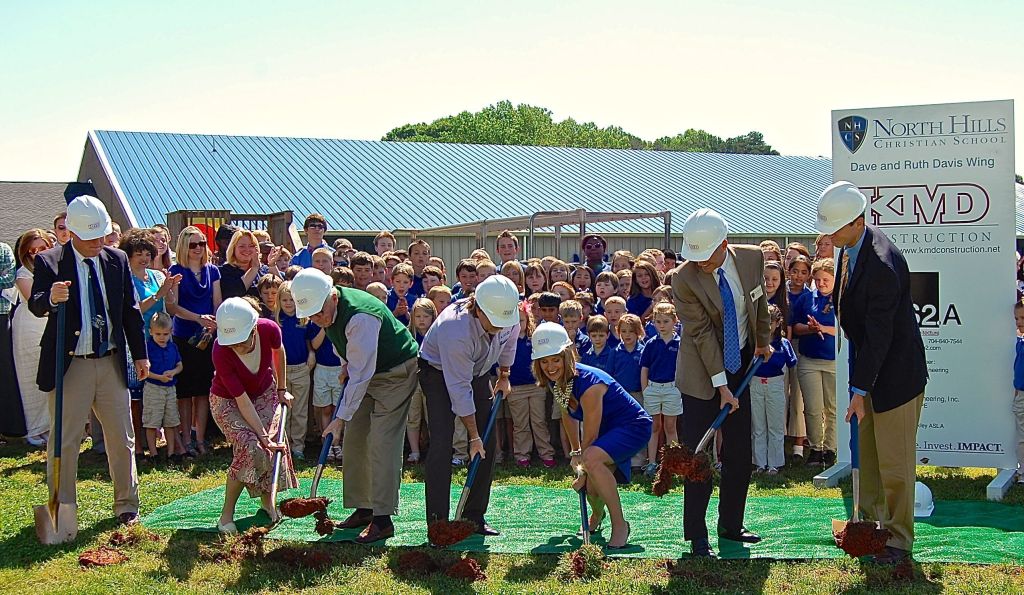 North Hills Christian School administrators, staff and supporters broke ground on a nearly $1.7 million expansion project Friday.
The project will “completely transform the look” of North Hills’ campus, with more classrooms, an updated front, outdoor learning spaces, a fully equipped science lab, art and music rooms, an outdoor performance area and covered walkways, said Executive Director Maria Lowder.
“What you see on the outside will be a reflection of what’s always been on the inside,” she added.
Over the past 50 years, North Hills has served 5,000 students who now live all over the world.
Students, faculty and staff hope the improved facilities will enable the school to reach even more people.
“I think the school is going to grow a lot,” said ninth-grader Jordan Plummer.
“It’s going to improve our class curriculum offerings,” Lowder said.
Plummer said she’s excited about the covered walkways that will mean “not having to walk in the rain anymore.”
“I really like the idea of the stage,” said Brittany Hogan, a 10th-grader.
She also said the new science lab will make class more interested.
“You’re really not allowed to do too many labs in the science room,” she said.
The additional facilities will be called the Dave and Ruth Davis Wing.
Over the past 18 months, North Hills has planned and executed the capital campaign and conducted feasibility studies for the Dave and Ruth Davis Wing.
The outdoor connecting learning space and the amphitheater should be completed before students return to school in the fall, and the science lab, art and music rooms and classrooms should be completed by December.
North Hills is using KMD Construction, a decision Lowder said the school feels good about.
Chairman of North Hills’ Board of Directors Kyle Mitchell said the excitement about the additions is already causing a “neat vibe” that’s taking place in the school community.
During the ground breaking, students put together a time capsule that will be buried in the school’s new connecting outdoor classroom. In 25 years, North Hills students will open the capsule filled with pictures, journals, books, even a copy of the movie “Frozen.”