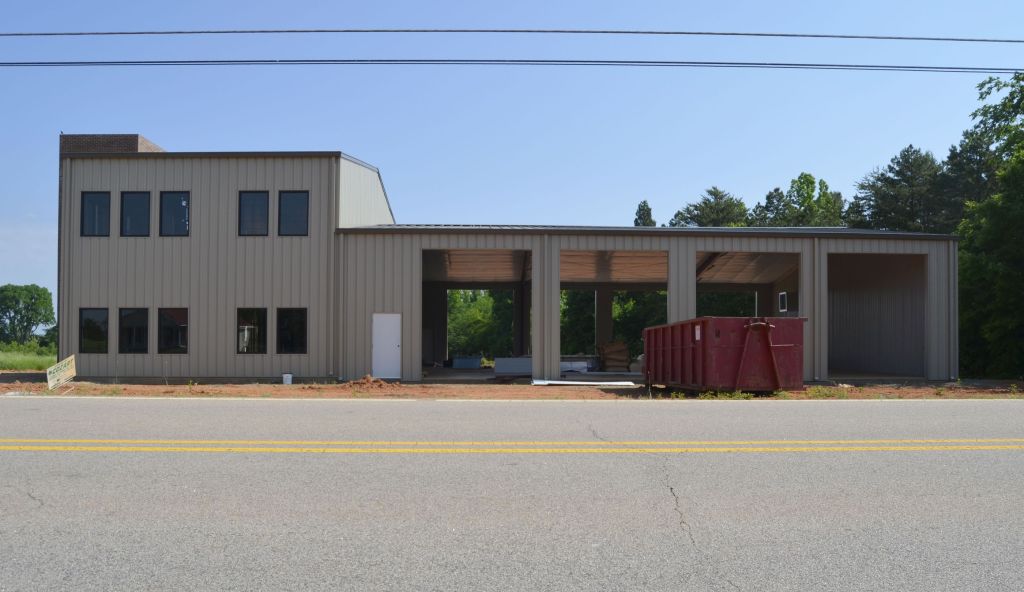 After about two years of construction, crews have nearly completed work on a second Millers Ferry Fire station a short distance from the current one. The station will bring the fire department into compliance and provide fire service for an area that is currently not protected.
The new fire station came under scrutiny recently at an annual board meeting when some residents raised concerns about the need for a second station, the cost and its size.
Fire Chief Bobby Fox tried to field the questions, providing answers when he could.
When the department began looking at coverage, officials realized some homes were not covered within the Millers Ferry fire district, although they were less than 10 miles from the station. The need for another station also was dictated by the Insurance Service Office (ISO), which provides the minimum level of fire protection and qualifies homeowners to be eligible to receive reduced insurance premium rates.
According to the ISO rating requirements, a coverage area cannot exist beyond five miles from the fire station. The ISO system determines the price of fire insurance in a community through a one to 10 classification rating. The best rating a department can receive is a one, but few departments receive that.
Classification points are given for types and number of fire trucks, training, location and water supply. The rating system is a way to see if the department is providing sufficient and adequate service for the communities they protect and serve.
Communities with a Class 1 rating can expect to pay substantially less in homeowner’s insurance than those in a community with a Class 10 rating.
Millers Ferry Fire Department has over the years lowered its rating from nine to six, but with another station it could receive a lower rating.
“The county is trying to get them all lowered,” Fox said.
Fox said several options can lower an ISO rating, including contracting with other fire stations, not providing fire protection to some, or building another fire station.
He said at least five other county fire departments have built other stations, Rockwell Rural Fire Department is one of those.
Millers Ferry Fire Department receives mutual aid, but unlike others throughout the county, it is farther away from the nearest fire station.
There are about 18 homes in the Anchor Downs subdivision that are not protected by a fire station. The area of Skysail Road is the farthest away from the current Millers Ferry station in road miles, although based on a map the area of Mainsail Road appears farther. A section of Foresail Road does not currently have fire protection.
The new station is about 2.5 miles from the existing station and 2.5 miles from the Anchor Downs subdivision.
The new station is a bit larger than the current one and will include four bays. The current station has three and will likely include ambulance response or rescue squad personnel.
The new station will house at least eight fire personnel, some of whom will be moved from the current station. There will also be some room for growth. Fox said the two stations will fall under the same department. The fleet will be divided with three trucks and half the personnel at each station.
The new station cost $830,000. That is being paid with money that was re-appropriated after the department paid off two fire trucks, Fox said.
The money for the station was built into the budget, he said, and it is not subject to any fire tax increase.
The project began with grading in September 2012, with construction beginning August 2013. It is expected to be complete by mid-July. Speck Builders is the general contractor while Cozart Lumber & Supply is providing the building materials.
The property was donated more than 30 years ago by the J.I. Palmer family. In order to be compliant with Americans with Disabilities Act (ADA), the two-story station had to include an elevator.
The station will have a decontamination room, a training room or future fitness room, as well as accommodate a live-in program where those who want to pursue a career in fire service can stay in the station.
Contact reporter Shavonne Potts at 704-797-4253.

Eight-mile section of Uwharrie Trail set to be reclaimed…