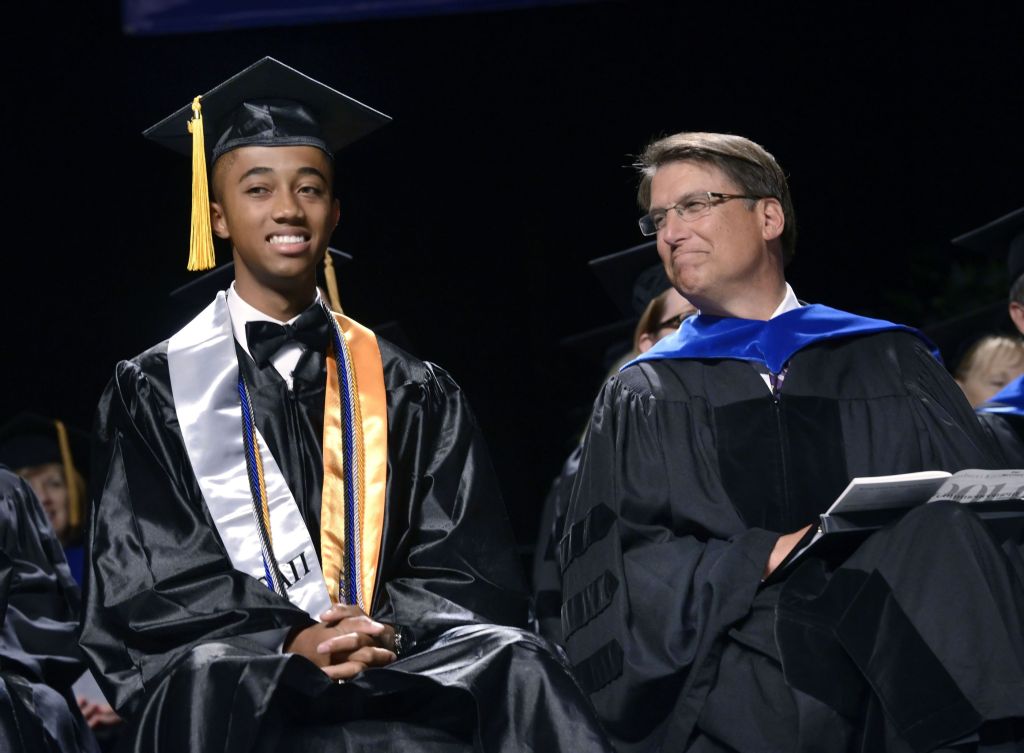 CONCORD — Gov. Pat McCrory made a stop Friday at Rowan-Cabarrus Community College’s graduation to deliver the commencement address and congratulate the school’s graduates.
The governor encouraged students to assess their strengths and weaknesses and continue to strive for excellence.
The only way to unleash your potential is to “continue to exercise your brain,” McCrory told the graduates gathered at the Cabarrus Arena and Events Center.
“Surround yourself with a diverse group of people that will encourage your talent,” he added.
The governor also encouraged students to persevere, even when life gets hard — advice he said the famous boxer George Foreman once gave him.
“Keep fighting” even when you get knocked down, he said.
More than 1,700 degrees, diplomas and certificates were conferred at Rowan-Cabarrus Community College’s 50th graduation exercises, and 632 GED students graduated as well.
Graduates came from every walk of life.
Melissa Martinez, a single mother, received her degree in early childhood education.
Martinez works at Partners in Learning and her daughter, Isabella, is nearly 3 years old.
“It was very hard,” she said, adding she decided to go to Rowan-Cabarrus because it was convenient to her home in Salisbury.
“I always had a passion for kids, and I love working with them,” she said.
Martinez said she plans to transfer to the University of North Carolina at Greensboro in the fall to get her bachelor’s degree in education. She hopes to become a work therapist.
The college also graduated its first Morehead-Cain Scholar.
Cabarrus County Early College student Daverion Travun Williams, who goes by Tre’, graduated with two associate’s degrees — one in arts and one in science.
“I graduate from college before I graduate from high school,” he joked.
Williams finished all his high school credits by the end of his sophomore year at the early college, so he spent the rest of his time taking college classes.
He will attend the University of North Carolina at Chapel Hill for free for the next four years. Williams said he plans to double major in math and business and double minor in logic and Spanish.
Although he doesn’t know exactly what he wants to do after graduation, he feels his chosen fields of study “will open up a broad range of possibilities.”
Plus, taking Spanish will be a challenge for him, as it’s the only class he’s ever made a B in.
“It’s one of my weaknesses,” he said.
Williams encouraged his classmates to work hard and follow their dreams.