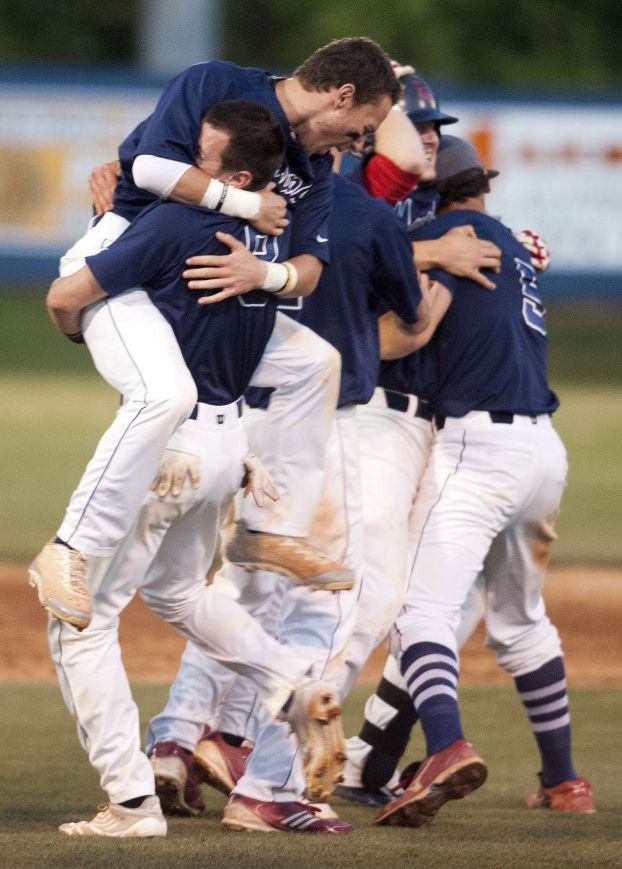 GRANITE QUARRY — A new champion will be crowned in 3A baseball.
Back-to-back title-winner Weddington lost 2-1 to East Rowan at Staton Field in the second round on Friday, ending an amazing run by coach Travis Poole’s Warriors.
Weddington’s 68 victories the last three seasons had included serious dominance against Rowan County squads.
Weddington beat West Rowan, Carson and South Rowan on its way to the 2012 state title, knocked East out of the 2013 playoffs and also had eliminated East in a second-round, extra-inning game at Staton Field in 2011.
But East finally got payback on a night that saw just about everything, including Dustin Ritchie’s winning squeeze bunt and WSAT broadacaster Buddy Poole taking a line-drive foul ball off his chest in the pressbox.
Much like the Mustangs, Poole scrambled back to his feet when things looked bad and got the job done.
“East played a heck of a game,” Weddington’s Poole said. “We were playing a very good program and we knew that coming in here. We had plenty of chances. We just didn’t execute in some key situations. There were also situations when East didn’t execute, but in the seventh, they did.”
East left-hander Connor Johnson, who lost to Weddington as a junior, provided the game’s most memorable moments. It was 1-1 in the top of the seventh, and the Warriors had filled the bases with no outs on Josh Hollifield’s single, a hit batsman and Johnson’s throwing error on a sac bunt.
“I knew I had to get strikeouts in that situation,” Johnson said. “I probably threw the most curveballs I’ve ever thrown in my life to the No. 8 and No. 9 hitters.”
He struck them both out. East anticipated a squeeze bunt from the No. 9 man, but the Warriors, who don’t have any weak spots, swung away.
Even with two down, Johnson wasn’t out of the woods. He faced leadoff hitter Daniel Calabretta, MVP of the 2013 state championship series and a Duke signee. Johnson struck him out with a whistling fastball to finish the trifecta.
“My adrenaline was going so fast then, it was hard to even think,” Johnson said.
East head coach Brian Hightower took in Johnson’s latest performance. He was impressed but not surprised..
“He showed why I think he’s the best pitcher around here,” Hightower said. “He’s just so darn competitive. In a tough situation like that one, he just gets that much tougher He manned up.”
Those three consecutive whiffs had a huge crowd screaming, and East came in for the bottom of the seventh fired up.
“When you don’t score with the bases loaded, that’s the turning point a lot of times,” Weddington’s Poole said. “We didn’t put it in play, but you’ve got to give credit to that guy East had on the mound. He’s pretty good.”
Johnson (10-0) is headed to Catawba. He struck out eight Warriors, pushing his career total past 200.
“Connor is a machine,” Ritchie said. “Yeah, we were ready when we came in to hit.”
East executed following a call to the bullpen during which Weddington lifted startng pitcher Eric Whitecavage, who had pitched very well.
With Ike Freeman running from first base with one out, Luke Setzer drilled a single to right.
“It would’ve been a base hit for Luke anyway, but with Ike running, he was able to get to third, and that was huge,” Hightower said.
Ritchie, East’s No. 5 hitter, was next. He took ball one. Then he swung through a high fastball. When he looked down at Hightower, he saw the squeeze sign, blinked, and looked again.
“I saw the sign, and it did surprise me,” Ritchie said. “It was only the second time I’ve ever bunted in a game — and the first time I’ve had a successful bunt.”
Ritchie had to bunt a pretty tough breaking ball, but he managed to put the ball on the ground and Freeman got a tremendous jump off third. There was nothing Weddington could do. Freeman crossed the plate, and the celebration started.
“Give that kid credit,” Weddington’ Poole said. “He could’ve easily popped that ball up, but he didn’t.”
Hightower was confident Ritchie would deliver on the squeeze.
“We don’t ask him to bunt because he’s such a good hitter,” Hightower said. “But in practice, he’s a very good bunter.”
Both teams stranded a runner at third base in the first, and the Mustangs (22-7) left the bases full in the fourth. Weddington broke the ice in the fifth, scoring an unearned run on a throwing error.
“After they went up 1-0, I’m rubbing our lucky pet turtle and I’m kissing a horseshoe,” Johnson said. “To win a game like this, you’ve always got to be a little bit lucky.”
With two outs and nobody on, East got that run back in the bottom of the fifth when Ty Beck whacked a two-out double and Freeman singled him home.
It stayed 1-1 until East got it done in both halves of the seventh.
“The bottom of the seventh, that was Ike and Luke just as much as it was me,” Ritchie said.
As far as the top of the seventh, there was no doubt who that belonged to.
East will host Piedmont in next week’s third round. Hightower said the Mustangs will work at cleaning up some defensive breakdowns before they take on Milt Flow’s Panthers, who eliminated SPC team Cox Mill on Friday.