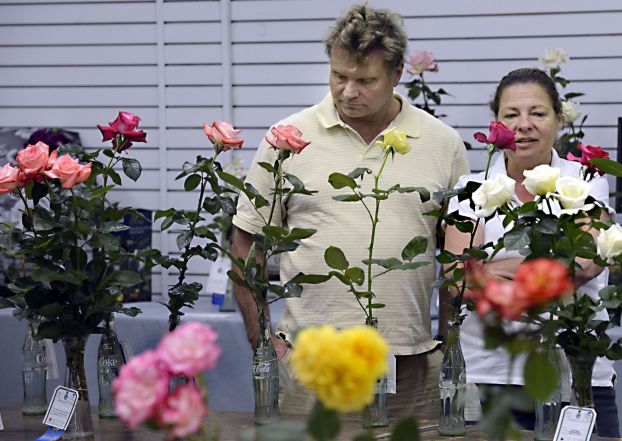 SALISBURY — Sometimes, everything doesn’t come up roses.
Cold, rainy spring weather kept roses from blooming as they might have done, and thinned the competition at this year’s 55th annual Rowan Rose Show.
But Wesley Seamon, chair of the Rose Show, said there are still a lot of excellent blooms to be seen.
The Rose Show continues today from 1 to 5 p.m. at the West End Plaza, the former Salisbury Mall, with roses to be sold at 5 p.m.
The cold spring and recent rains have set back rose growth, Seamon said. “We had quite a few (entries) from Greenville, Spartanburg and Shelby.”
But in Virginia and the northern counties of North Carolina, Seamon said, the cold has kept roses from opening on time.
What’s more, Seamon said, the heavy rains of recent days had damaged some roses that might otherwise have been contenders.
“Up to a week and a half before the show, you’re cutting roses for the show,” Seamon said — and those roses can be refrigerated, but can start to lose their beauty.
“We have to set a date (for the show), but Mother Nature is in control,” Seamon said.
There were still tables filled with blooms aplenty at this year’s show.
Judges award categories for different classes of roses, as well as for different types of presentations and arrangements.
Doug Whitt, who has been showing roses in Salisbury since the early 1980s, won several awards Saturday: Queen of Show, Queen’s Court, Best Three of a Kind, and miniature King — each for a different quality or presentation.
One such variety, the Ginny rose, reminds him of his late wife Ginny Whitt, Doug said.
“I don’t come every year, but I come every couple of years” to the rose show in Salisbury, he said. “There are a lot of personable people here.”
Carolyn Alexander, president of the Rowan Rose Society, said that although the competition field is a little smaller than normal, “it’s a beautiful show.”
Weather and random chance do play their role in determining which roses make the cut for the competition, Alexander said.
“It varies a little from year to year,” she said.
This year, Alexander said, there were more entries in the Old Garden Roses category, or those introduced before 1867.
For Mariette Riedell, who saw her roses damaged in March’s storms, the hours leading up to the Rowan Rose Show were nerve-wracking.
“I was gathering roses up last night and at 4 a.m. this morning,” Riedell said.
The reward was sweet: Riedell, a first-time competitor, saw three of her seven entries win awards.
That’s not to say Riedell wasn’t worried. Earlier Saturday, she said, “I was trying to wipe the leaves down, and I couldn’t hardly keep my hands from trembling.”
She said the Rose Show gave her good experience, and also showed the benefits of her hard work.
Robert Myers, an American Rose Society judge and an international judge, headed up the team of judges for this year’s show.
In years like this, Myers said, “you have to be very forgiving and have a lot of patience.”
Roses, Myers said, require perseverance in order to get the best flowers possible.
This year’s competition was good, Myers said, because of how much time and effort people had put into their entries.
Alexander also said the annual Rose Show is a place for people to get ideas and to ask for help in growing their own roses.
“I think one thing that’s exciting is to see so many members of the public come in,” Alexander said.
Myers agreed. “I learn so much off of talking to other growers, and that’s one good thing about coming to shows like this,” he said.
When it comes to growing roses, Myers said, “what works for one person may not work for another, but if it doesn’t work for you at that time, you try something else.”