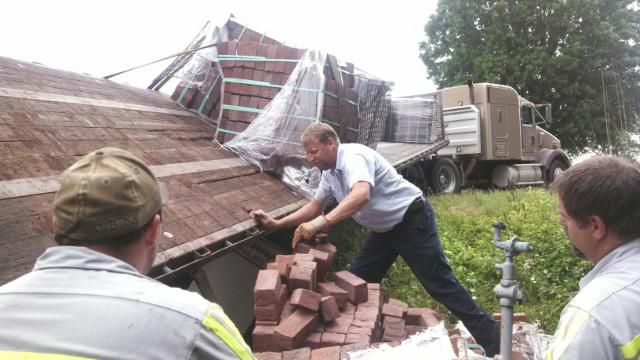 Traffic was detoured Thursday after a big rig hauling bricks from Old Carolina Brick Co. took a turn too fast and partially overturned into a ditch near a gas line at Majolica and Sherrills Ford roads.
William Burks, 39, of Virginia, is a driver with AMS Trucking, based in Amherst, Va. He was turning right onto Sherrills Ford Road from the Salisbury business with a load of bricks when the back end left the road and landed in the ditch. The cab of the truck never left the road, said N.C. Highway Patrol Trooper D.R. Morgan.
The single-vehicle accident occurred at 1:46 p.m. There were no injuries reported.
Locke Fire Chief Rusty Alexander said the gas had been turned off to the line after a school bus hit the same natural gas main during an ice storm in March. The emergency crews didn’t know the gas had been turned off until a Piedmont Natural Gas employee notified them.
Locke and Franklin Fire departments responded as a precaution, he said. Kepley Grading and Movers used a tow truck to move the trailer and other equipment to pick up the bricks and put them into a truck. The driver was not charged.
Contact reporter Shavonne Potts at 704-797-4253.