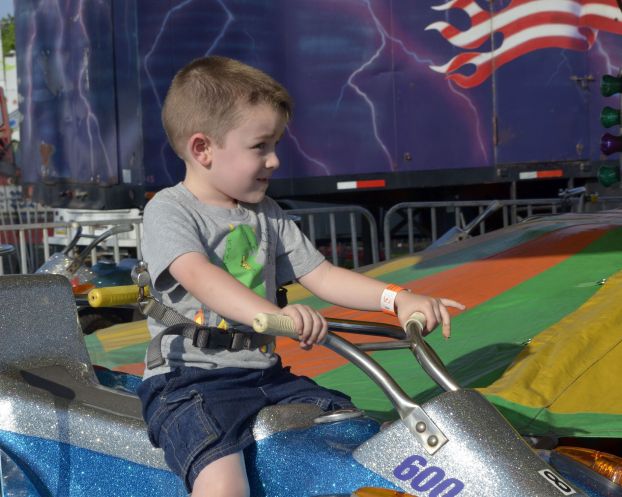 SALISBURY – As far as MayFest is concerned, organizers know today is most likely going to be a washout.
It’s a familiar story for organizers. Last year, Rowan County Fair Manager Johnny Love said, “the weather was our biggest enemy.”
But the weather forecast for Friday, Saturday and Sunday looks to make up for all that.
And organizers say this year’s MayFest will offer fun and amusements for the whole family, with some changes to make this year’s event even better.
The event, now in its second year, aims to provide a family-friendly spring event with carnival rides, games and live entertainment, organizers say.
Randall Barger, event coordinator, said that aside from giving families a fun, low-cost event, MayFest is designed to bring people together with all the fun of a fair.
“I like carnivals, I just do,” Barger said.
Barger said that for some, the event has brought back memories of the former MayFest events at City Park in Salisbury.
Although that event didn’t have carnival rides, Barger said, there was a variety of entertainment for people to enjoy.
The MayFest Craft Show will be held Saturday, and admission will be free from 10 a.m. to 3 p.m. on that day.
Rides will open at 1 p.m. Saturday and Sunday, and will close at 11 p.m. both nights.
Love said the low cost – a flat $3 per ticket, with kids 3 and under admitted free, and $1 per car for parking – was meant to help families who don’t have a lot to spend on fun for their kids.
“It gives the community a chance to come out to good, wholesome family entertainment,” Love said.
“A lot of people, with the economy the way it is, can’t afford to go to Carowinds and drop $200 there,” Love continued.
At MayFest, Love said, “they can come out, ride rides, get some cotton candy and candy apples, see the free entertainment and not spend a lot of money.”
One big change from last year, Love said, is the number of rides.
A new company, Inner’s Shows, is providing the midway rides this year. “It’s more geared toward teenagers and adults,” Love said.
Nojoe’s Circus is back for a second year, with two different shows each evening.
Joey Thurmond, better known as Nojoe, said this year’s shows are a little different from the ones audiences saw in 2013.
He’s added a dog act, a high-wire artist and a fire act to the lineup, Thurmond said.
Thurmond said he’s optimistic about MayFest 2014. “We’re hoping to bring people into our little circus world … and give them something so when they leave, they feel like they’ve got their money’s worth,” Thurmond said as he prepared for Wednesday’s first show.
Gerald Almond, of Rockin’ “A” Ranch, said he was glad to be back with this year’s petting barn and pony rides.
When he saw the weather forecast for this weekend, Almond said, he breathed “a big sigh of relief.”
No matter the weather, Almond said he felt the event would go well.
“It’s family oriented and a good spring event for people to come out and enjoy,” Almond said.
As the sun began to set Wednesday, families began to make their way out onto the midway.
Others are signing up for another new element this year, Rowan’s Got Talent, which will take place Saturday.
Barger said that was inspired by the Faith Idol singing competition at the Faith Fourth of July.
However, this event is open to people with talents other than singing, although Barger said most of the acts signed up so far are singers.
“We e got one that’s doing a tumbling act, and at least one that’s dancing,” Barger said.
Out on the midway, Emily Hester and Kayla Rubin, of Salisbury, got an early start on the night.
Before dusk, they decided to come on out and check out the rides, the games and the petting zoo. Asked what her favorite part so far was, Rubin said, “Probably the animals!”
Over at Beaver Concessions, Beth Beaver Tapp and Resa Deal filled bags of cotton candy as quickly as they could, waiting for the food and drink lines to form.
Tapp, whose late father used to run the cotton candy concession, said last year’s bad weather didn’t put them off.
“We just love this fair,” Tapp said. “We are not giving up. We know this is going to be a big thing someday.”
MayFest will be open from 6 to 10 p.m. tonight and Friday, and from 1 to 11 p.m. on the weekend.
More information, including details on how to sign up for Rowan’s Got Talent, is available at 704-640-2326.
Contact Hugh Fisher via the editor’s desk at 704-797-4244.