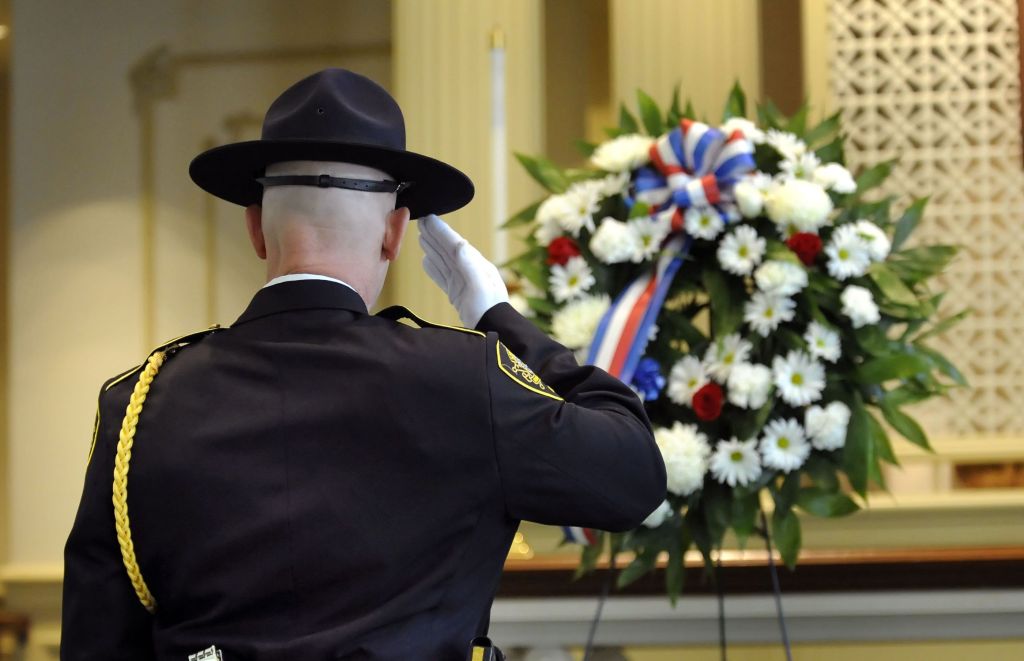 Each year during the Rowan County Peace Officers Memorial Service, area law enforcement, court personnel, family and friends gather to honor those who’ve died in service to their community. The officers’ names are read aloud, each year with very little said about how their lives ended.
This year, former Rowan County District Attorney Bill Kenerly shared for the first time a brief history on each officer during Wednesday’s service. He said he had been interested in knowing a little more about the men’s deaths and thought others would appreciate knowing as well.
The 19th annual memorial service also pays tribute to those who continue to serve and protect the community as well as those who’ve died from May 2013 to May 2014 in the state. The service was held at First Presbyterian Church.
“It’s important for people to know what they do everyday is dangerous; being on the highways and among people can be dangerous work,” he said. Kenerly said he knew six of the officers.
The officers are as follows:
• Deputy Chief Linzy J. Yarbrough, Rowan County Sheriff’s Office, June 3, 1927
Died from a gunshot wound he received the previous day while attempting to arrest a man wanted for a Charlotte murder. The suspect was convicted and later executed in February 1928.
• Sheriff William Locke McKenzie, Rowan County Sheriff’s Office, July 16, 1931
Killed by a man with a shotgun after responding to a disturbance. The suspect had recently been released from a mental hospital where he was being treated for shell shock suffered in World War I.
• Deputy Danny R. Griffin, Rowan County Sheriff’s Office, June 3, 1986
Died in a crash while on patrol. He was 26 and had been in law enforcement for five years.
• Deputy Rick Bauguess, Rowan County Sheriff’s Office, November 1, 1988
Was hit by a vehicle and killed during a required training run attending the North Carolina Justice Academy in Salemburg.
• Officer Roger Dale Carter, Kannapolis Police, December, 31, 1993
Was shot and killed after being dispatched to a home after a man called claiming to turn himself in on warrants. Carter was ambushed by the suspect in the driveway with a rifle. He was shot eight times. The suspect shortly after killed himself.
• Deputy John Beck, Rowan County Sheriff’s Office, January 27, 1994
Suffered a fatal heart attack after struggling with a suspect. Beck and another deputy were serving a warrant on a man wanted for threatening local citizens. The suspect verbally and physically assaulted the officers. They were able to arrest him and take him to the jail where Beck had a heart attack. He was pronounced dead at the hospital.
• Officer Robert Clement, Spencer Police, June 6, 1999
Died a year and eight months after being shot in the abdomen and neck while attempting to serve a warrant with another officer. He was in rehab since the shooting and was taken off life support the day before he died. The shooter shot himself during the incident.
• Deputy Rick Hillard, Rowan County Sheriff’s Office, October 17, 1999
Was killed during a chase with a motorcyclist. His patrol car hit a tree on a curvy road. The suspect turned himself in several days later. The shift supervisor was trying to contact Hillard to end the chase, but was too late in getting word to him.
“It’s good to review the stories to know what happened not just hear their name. It’s been 15 years since the Rowan County Sheriff’s Office lost someone in the line of duty,” said Sheriff Kevin Auten.
The Rowan County Sheriff’s Office hosts the service in conjunction with the Salisbury Police Department, who coordinates the program.
“We do this annually in order to remember their service to the community and their sacrifices. We feel we must do this,” said Police Chief Rory Collins.
Contact reporter Shavonne Potts at 704-797-4253.