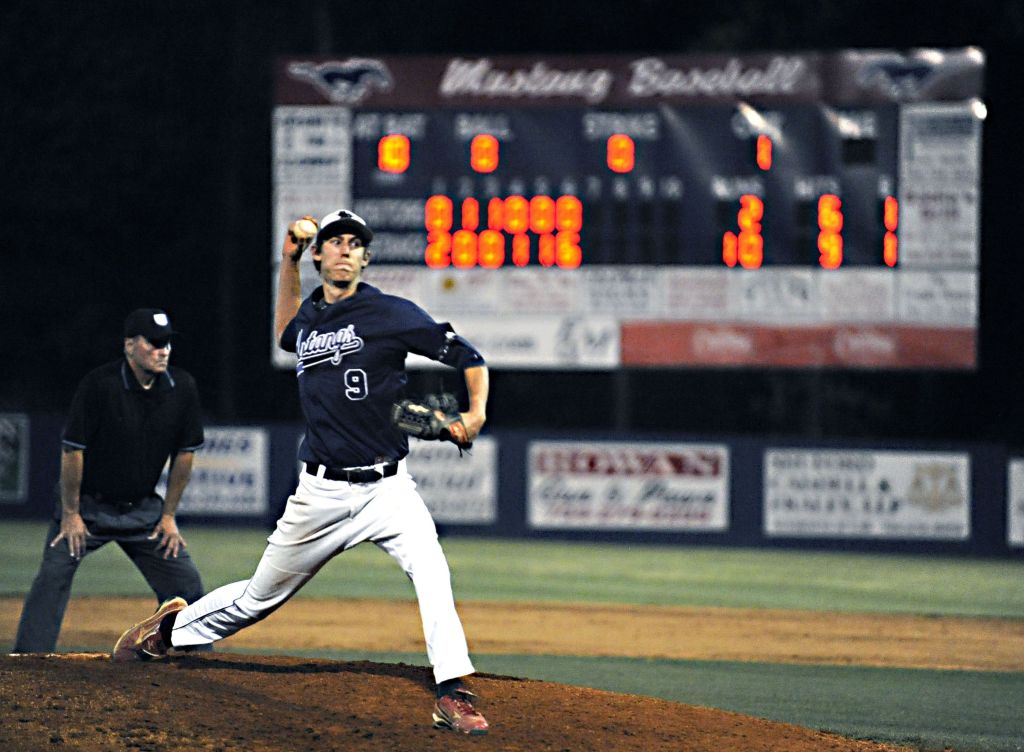 GRANITE QUARRY — East Rowan coach Brian Hightower breathed a sigh of relief as he helped his team pull a protective tarp over the infield at Staton Field in preparation for Friday’s scrap with Weddington.
Hightower had gambled — and won — in Wednesday’s 3A first-round game. If he’d lost, he may not have slept again for three months. He may not have spoken to anyone again for three years.
East won Wednesday with “Johnny Wholestaff” handling the mound duties. Four Mustangs hurled. Tyler Scruggs, basically unknown outside the East dugout and his family. made the most critical pitches and pushed his record to 2-0 for the season. Joseph Peeler earned his fourth save.
East beat Statesville 10-2, but there were plenty of opportunities for Hightower to fret and sweat.
As former East star Justin Roland said when it was all over, “That was a pretty close 10-2 game.”
It ws 2-2 and Statesville had the bases loaded in the third inning when Scruggs got a groundball and East second baseman Michael Caldwell and scooping first baseman Samuel Wyrick teamed up to turn a bang-bang, inning-ending double play on R.J. Conner, a fast runner.
“Sure, I was nervous,” Hightower said. “That double play in the third was absolutely huge.”
Hightower has studied the 3A West bracket backwards and forwards and sideways, He knows who’s supposed to beat whom and who’s pitching for everybody all the way down the line, and he came to a tough decision.
“I’ve never done what we did tonight,” he said. “I’ve always pitched my ace and tried to win that first game because you can’t play the second one if you don’t win the first one. But Weddington is playing really, really well, and I felt like our best chance to beat Weddington would be if Connor Johnson pitches against them.”
Johnson is 9-0 with 100-plus strikeouts. Johnson gives East a chance against anyone. So the next logical question is why did Johnson pitch the first inning against Statesville.
“I wasn’t going to start a playoff game with our No. 4 or No. 5 pitcher,” Hightower said. “You do that, you’re not going to be mentally sharp. So we started Connor. We had a plan. He wasn’t going to throw more than two innings or 20 pitches. Then we go up 2-0 in the bottom of the first, and it wasn’t a hard decision to take him out at that point.”
East went up 2-0 in the bottom of the first on run-scoring hits by Luke Setzer and Dustin Ritchie. Ritchie, East’s starting catcher, had been out of the lineup with a separated shoulder since East’s Easter tournament.
“To be honest, I surprised myself with the double my first time up,” Ritchie said. “He didn’t throw me anything but fastballs, and my timing was better than I thought it would be.”
Harrison Bell took the mound as Statesville batted in the second, and the Greyhounds started chipping away. Mostly it was Travis Ramseur, the Greyhounds’ pitcher. He doubled and scored in the second and delivered a run-scoring single in the third. That’s when Scruggs relieved Bell and got the double play.
Michael Caldwell’s two-out RBI single put East up 3-2 in the fourth.
“We made adjustments to the pitcher and kept doing our jobs,” Caldwell said. “We didn’t want a repeat of last year. We lost in the first round of the playoffs, and that was an ordeal.”
Scott Sapp’s run-scoring grounder made it 4-2 in the fifth, but Statesville stayed in it with defense. Connor, Statesville’s freshman shortstop, made a Superman-ish flying catch in the second to rob Caldwell.
“A pretty great play,” Caldwell said. “But that’s baseball for you.”
Statesville second baseman Dylan Haskell added a leaping catch in the fourth.
“We were able to compete,” Statesville’s rookie coach Jeff Peck said. “All nine of our starters will be back next year and while our won-lost record isn’t good, they’ve earned some respect. These kids are fearless and they’ve given Statesville baseball a pulse. They’ve resuscitated the program.”
Ramseur, the Hounds’ star sophomore quarterback in football, pitched five innings with an accurate fastball and a knuckle-curve that fooled some Mustangs. When he left the mound, it was 4-2.
“Travis has got a spider bit on his thigh and was actually in the hospital earlier today,” Peck said. “But that’s how competitive a kid he is. After five innings, he came to see and said that was all he had.”
It all came apart on Statesville (5-15) in the bottom of the sixth. Ty Beck had a key hit for East to make it 5-2. Then the Mustangs piled on five more runs on a string of errors.
“I was never that nervous,” Ritchie said. “We’re a late-inning team and have been all season.”
Peeler allowed only one hit in his two innings and struck out the side in the sixth. Along with Johnson, Bell and Scruggs, he got the job done, and now East (21-7) feels it has the best chance it’s had to do something in the playoffs in a while.
The games come along rapidly now, and Hightower not only has Johnson ready for Friday, No. 2 starter Chase Jarrett is still fresh if East can get to Round 3.
“You try to look at the big picture,” Hightower said. “I sleep, eat and drink baseball, and you want your kids to have their best chance. We have a chance. That’s all you can ask.”
East faces the same Weddington team Friday that buried the Mustangs 8-0 to end the 2013 season, but East is better than last season and Johnson is a different, more mature pitcher.
“My guys learned a lot tonight watching how East plays,” Peck said. “They showed us how to play. They took care of the baseball and just kept grinding until things turned their way.”
Statesville 010 100 0 — 2
East Rowan 200 116 x — 10
WP — Scruggs. S — Peeler. LP — Ramseur.