Oliver ready to take over as health director 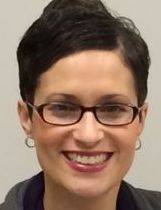 SALISBURY — Nina Oliver, who has been interim director of the Rowan County Health Department, was named director on April 22, and plans to tackle some perennial health issues in Rowan.
Oliver has been with the department for 11 years, working her way up. She started as a dental health educator, then worked in emergency preparedness for almost seven years. “That’s where I have a lot of my foundation. I made a lot of connections in that role.” From there, she moved into a nursing supervision role, where she supervised programs. “I’m not a nurse,” she said.
But she loves the field of public health, so she was excited to be named interim director, and now, director. “I feel it’s a reward for hard work.
“It’s interesting the growth I’ve been through in the years I’ve been here, personally and in the career. I’ve learned a lot. I came in fresh out of grad school and I had a lot to learn. It’s been challenging and rewarding and right now is a new beginning, a new start and learning all over again. I have lots to learn and lots of challenges.”
One of her concerns is dental health. She realizes adults do not have a lot of options if they do not have insurance. “We do have the Community Care Clinic and Good Shepherd Clinic. Our clinic here is just for pediatric patients.” The Salisbury Missions of Mercy Clinic dental health clinic for adults that was held last September will be repeated next March due to need. “I do worry about that, it’s on my list of things to discuss.”
Among her other concerns are obesity, minority health, breastfeeding and chronic illness.
Oliver is especially troubled by the 2.5 percent higher death rate of African American babies versus white children. That’s why she’s making a big push for breastfeeding. “There are so many benefits,” Oliver said. “The mother passes on antibodies for disease resistance. There’s less diabetes, less heart disease, less cancer later in life” for children who were breastfed.
She said breastfeeding is sometimes looked at as taboo or too difficult for the mother. “We have a wonderful breastfeeding peer counselor, Yolanda Butler. She teaches mothers how to get the babies to latch on, how to position the babies.” The health department works in conjunction with Novant Health on breastfeeding education.
As far as Oliver’s concerns about obesity, she wants to promote activity, fitness and better nutrition. “We’re not saying ‘Get into the gym.’ It’s more like taking time out of the week to take a 15-minute walk, go into the park with your kids and toss a ball around, instead of staying inside and watching TV, especially in the spring and summer. People can enjoy outdoor activity at all these festivals,” she said, referring to upcoming events in the area.
She wants people to make better choices at the drive-through. Instead of the fried option, try the baked option or the fruit option. “It’s healthier for you and you will feel better, you won’t feel sluggish.”
Oliver said Amy Smith, the health educator, can work with people on menu selection and healthier eating options. “I love that the farmers markets are open. We promote those for fresh fruits and vegetables and are making a big push for WIC clients to use their vouchers there and not let it go to waste.” WIC is the supplemental nutrition program for Women, Infants and Children.
The chronic illnesses in Rowan are universal — diabetes, heart disease, tobacco use, obesity.
Oliver hopes to get out in the community more and said the department has not done a lot of community outreach in the last year. She wants to improve on that.
She also believes people don’t know what’s available at the Health Department. Most children’s vaccines are free at the department. Medicaid and Medicare patients can receive services there. “Anyone can use it,” Oliver says. People with private insurance do have to pay for services, but “we’re working to make it more client friendly.”
And there’s lots of health information and education available. “We offer 11 services, with subdivisions of those,” Oliver says. They oversee Animal Control, which will become its own department in July; the Department of Environmental Health; family health services; well and sick visits for adults and children; family planning, health education, immunizations, dental care, prenatal care and WIC.
Oliver, her husband, Will, and 21/2-year-old son, Chase, live in Charlotte but are looking forward to moving to Rowan.
Oliver holds a bachelor of science in psychology and African American Studies from Guilford College and a master of science in health promotion from the University of North Carolina at Charlotte.
“There’s a lot of work to be done and some challenges to face, but I am ready for them,” she said.