Foxx on time for library donation, books a day late 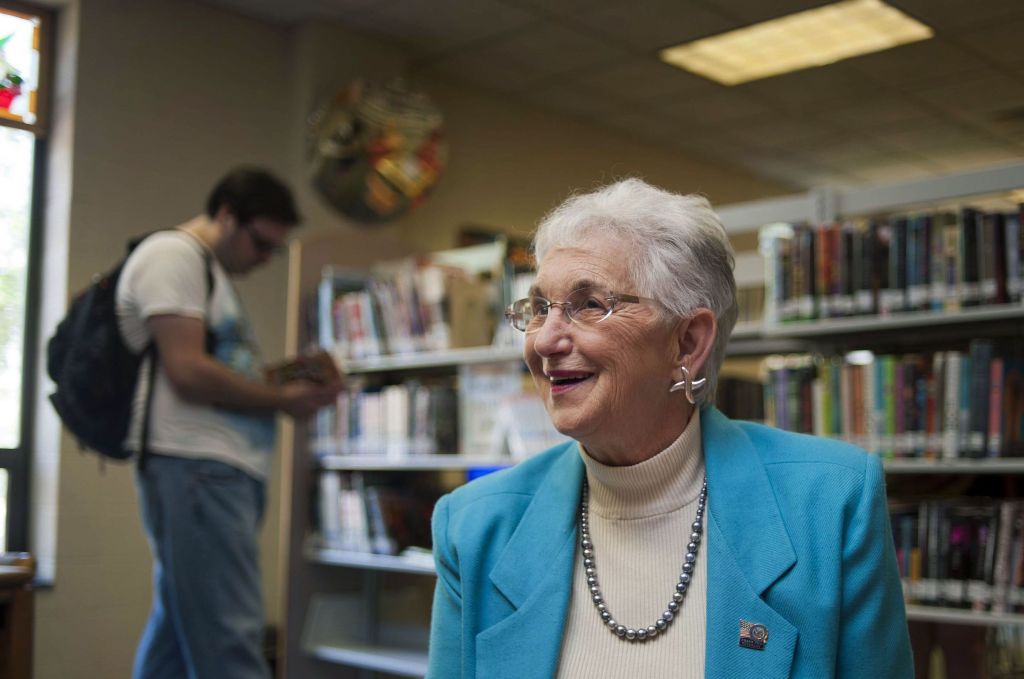 SALISBURY — Intentions were good, but logistics were not, so U.S. Rep. Virginia Foxx (R-5th) laughed and shook her head.
She was coming to Rowan Public Library to donate books and audiobooks from the Library of Congress on Monday afternoon. She and aide Ross Groen were right on time and realized as they got out of the car in front of the library that no one had loaded the donation in the car.
“This is so embarrassing,” Foxx said. “Let me make some calls.” The books had a nice day in Boone Monday, but have now arrived at the library’s headquarters.
Foxx explained to Erica Kosin, library services manager, that she was able to get the material Kosin requested — young adult audiobooks, Spanish language books, children’s and young adult books and a little fiction and non-fiction.
Kosin said the library always needs new material for children and young adults, and has a special need for Spanish language books. When she opened the box Tuesday, she found more adult fiction and nonfiction than expected and a few audiobooks. Kosin said the library did get books written in Spanish and children’s books.
“Now it’s a matter of getting them into our collection.” she said.
Foxx explained that because every book published in the United States must have a copy in the Library of Congress, the library ends up with too many books. In a program Foxx said was set up by the founding fathers, those excess books go to libraries all over the country. Representatives and others in government can request the books and decide where they are needed.
“I believe in libraries and I believe the federal government has a role in libraries. If we do not have educated people,” she said, “we cannot sustain our form of government.”
Rowan is the second library for which Foxx secured a donation. The first was in Alleghany County. She’s trying to serve counties that are on her travel schedule during her work weeks, when she returns to North Carolina from Washington.
Foxx said she always has stacks of newspapers in the back of her car and books at the ready for traveling. On a particularly long plane trip overseas and back, she read “Water for Elephants” and “The Elegance of the Hedgehog.” She reads print and ebooks.
Foxx is a former librarian, going back to eighth grade, when she helped the school’s librarian, who was just more than 4 feet tall, shelve books. “I read every book in that library,” she said. Foxx went on to work in the library at Appalachian State University.
The one restriction on the material from the Library of Congress, she told Kosin, is that they cannot be sold. “They have to stay in the library, be given away or destroyed.”
Kosin said she was “very thankful for the donation.”
Foxx recently won the Republican primary for District 5 and is awaiting the results of a primary runoff between Josh Brannon and Gardenia Henley to determine who her Democratic opponent will be. Foxx is in the middle of her fifth term.
On Monday, Foxx went to Statesville, visited a high school, a military officers’ group and a senior center. She was to go to Clemmons after her stop in Salisbury. She said if she has a driver, she answers her email while she’s on the road. She enjoys spring weekends, when she attends two to eight events, many of them festivals.
She said the economy and jobs are the top issues facing North Carolina. “This is the worst recovery since World War II,” she said. “The average wages have gone down in the last five years. … Too many people are working part time who want to work full time.”
She said the country does not have a revenue problem — it has a spending problem and that has to be brought down.
She is pushing the Skills Act, which would consolidate 37 workforce development programs into one, which would then give block grants to states so the state can design a workforce development program that fits its needs. It also reduces the size of such boards from 33 members to 19 — the majority of whom have to be employers.
“A four-year degree is not what everybody needs to get a good-paying job,” she said. She thinks certificates should be issued to demonstrate a person’s skills, which can be specific to employers. “Education ties very much into jobs and the economy.
“Every choice you make should lead to more choices for you,” Foxx said. “Don’t do something stupid.”