Dang will play lacrosse at Laurel 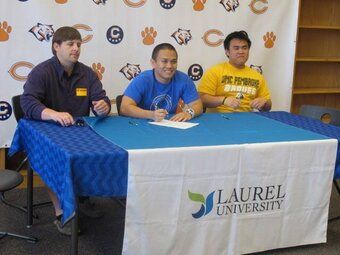 CHINA GROVE — “Crooked Arrows” is a lacrosse movie that received mixed reviews, but watching it provided a life-changing experience for at least one Carson senior.
Tommy Dang, best known as the hard-nosed fullback for Carson’s football team, read the preview summary of the movie and then watched it on Netflix.
“I knew I had to check it out,” Dang said.
“Crooked Arrows,” is about an underdog squad of Native Americans from a reservation who compete against New York high schoolers with superior training, facilities and equipment. Dang was fascinated with the chumps-to-champs story and equally fascinated with lacrosse, a sport that had been as foreign to him as cricket.
After seeing the movie, Dang said he looked into the possibilities of getting lacrosse started at Carson. It’s a fast-growing sport in North Carolina high schools, but it’s still mostly a 4A city-school and suburbs sport. Carson is 3A and rural, so his efforts didn’t fly.
Still, Dang will get a chance to find out if he can play lacrosse — or not — this fall. He’ll be part of a first-year program at Laurel University in High Point. Dang will join several Carson classmates who are going to Laurel to play soccer.
Dang first heard about Laurel from Carson soccer player Fox Correll.
“Laurel is giving me an opportunity to be a part of their program,” Dang said. “Coach (Luke) Christiansen is confident of me developing into a lacrosse player.”
Carson football coach Joe Pinyan doesn’t doubt Dang.
“He’s an over-achiever,” Pinyan said. “Tommy is not real big, and he’s not real fast, but there’s no one pound-for-pound who’s any tougher than he is.”
Dang, listed at 5-foot-6, 175 pounds, played in a talented backfield that included quarterback Austin McNeill and ballcarriers Brandon Sloop, Darren Isom and Tyler Reynolds, so there weren’t a ton of carries for Dang, whose role usually was to block. As a senior, he rushed 85 times for 316 yards.
Dang was respected for his overlooked contributions to the 2,771 rushing yards Carson accumulated last fall, and his teammates liked him.
“Last game of the regular season, we’re playing Cox Mill, we’ve got a nice lead, we’ve taken the starters out, and guys are coming up to me and asking me to put Tommy back in,” Pinyan remembers. “I didn’t realize it, but they reminded me he hadn’t scored a touchdown all year.”
Pinyan listened. Dang headed back to the huddle. He quickly scored from the 6-yard line with 1:26 remaining to cap a 49-21 victory.
“Tommy probably got that TD himself,” Pinyan said with a laugh. “I’m not sure who was still in to block for him.”
Whether Dang will do any scoring in college lacrosse remains to be seen, but he thinks he can, he’s working out to get ready, and it’s always been a mistake to doubt him.
“He believes in himself, and he’s one of those guys that likes for people to tell him he can’t do something,” Pinyan said. “Then he goes out and does it.”