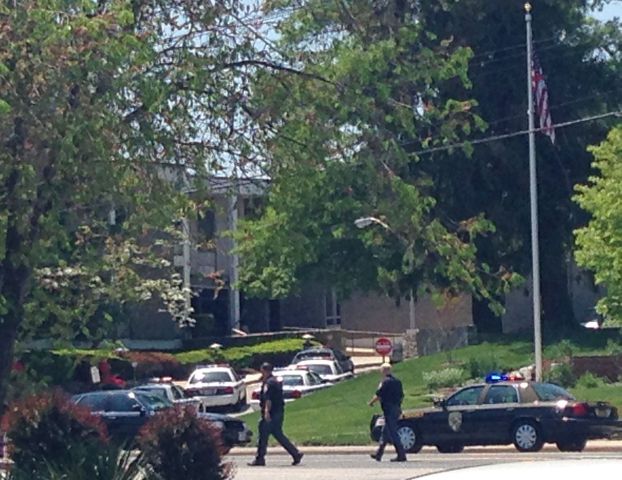 TOWSON, Md. (AP) — A man claiming to be God rammed a truck through the front of a Baltimore-area television station Tuesday, leaving a gaping hole in the front of the building as reporters and other staff fled the chaotic scene.
Police were still searching for the driver Tuesday afternoon. They said they didn’t know of a motive and didn’t find weapons in the truck, but they assumed the driver may be dangerous because he ran into an occupied building.
Michael Marion was in his office off the lobby of WMAR-TV’s building when he heard someone rattling violently against the security door about 11:45 a.m. The person demanded to be let in, claiming “I am God, I am God,” Marion said.
“I heard a series of crashes,” Marion said. “The next thing, I looked in the lobby, and the only thing between truck and the lobby was the final door. I heard one final crash. I looked through the door, and by then the truck was pulling in the lobby.”
The station believes everyone inside evacuated safely, News Director Kelly Groft told The Associated Press in a phone interview.
“Once the lobby started to collapse, we knew it was time to get out,” Groft said. “He drove right through the doors and into the main area.”
Baltimore County police said 55 people evacuated but that they couldn’t be sure everyone was out. About 120 employees work there, according to station owner the E.W. Scripps Co.
Groft said the station did a head count, though some people had hopped in cars and driven away and others were out on assignment.
Police said there had not been any reports of shots fired.
“As far as I know everyone is safe,” Baltimore County Police Department Cpl. Brian Kelly, standing near the scene, said.
A hole the size of several garage doors could be seen in the front of the two-story building, with a newsroom and studio on the first floor. It sits on a busy street connecting the suburbs with Baltimore, near the city-county line, and though parts of the road were blocked, drivers could still access an adjacent shopping center on Tuesday.
Next door, a school had been locked down as a precautionary measure, but students — escorted by staff to their parents — began leaving about 2:30 p.m.
Police received a 911 call about 11:45 about a man banging on the door and trying to get into the station, public safety spokeswoman Elise Armacost said. Within minutes, a call reported that a vehicle had come into the newsroom.
Armacost called it large commercial vehicle. Officers didn’t find the suspect in the vehicle, she said, and were still looking for weapons.
Marion said he didn’t see anyone get out of the truck, and he and a co-worker moved into a lower portion of the building, where they found a fellow employee in an office who hadn’t heard the crash. The group left through the back gate, Marion said.
“Everyone behaved really well,” said Marion, the ABC affiliate’s head of commercial production. “People of their own volition said, ‘It’s time to leave the building.’ No one panicked.”
WMAR broadcast its regular programs while the station was evacuated.
Brian Kuebler, an investigative reporter, said in a phone interview that he heard a commotion from his office and walked into the lobby in time to see the truck’s last three rams.
“I never even saw him. I just saw the truck,” Kuebler said. “That’s when it started to get pretty real. This guy was intent on getting into the building. It was pretty frightening.”
When police arrived, they moved everyone back, he said.
“We have the news to do and we’re sitting in the parking lot,” he said. “It’s a little weird. I’ve never been the story in my career.”