Shavonne Potts column: Next time, I want to be a victim 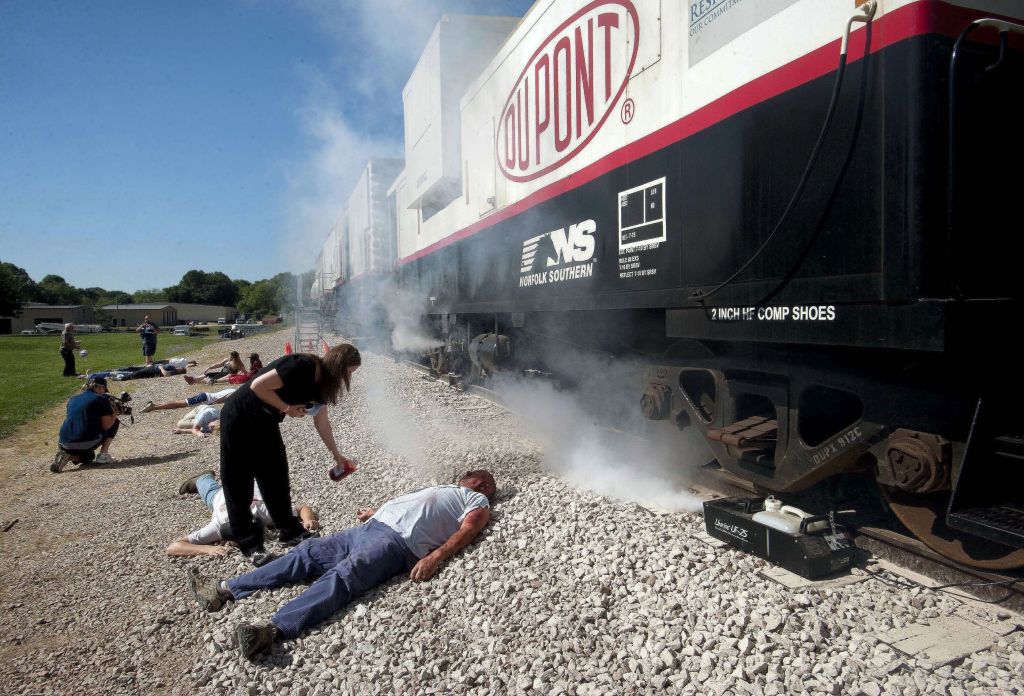 Last week, first responders participated in a multi-agency mock haz-mat drill that crossed municipalities and included several dozen volunteers. The drill was designed to test skills and see if improvements could be made on how people respond to such incidents.
The crews were observed by an independent company and me. Now I wasn’t actually part of the drill, but I was assigned to write a story based on what I saw and heard.
To say the exercise was very realistic is an understatement. After a 911 call was made, dozens of firetrucks and even more firefighters arrived, and did I mention all the fake blood?
There were plenty of confused looks on the faces of those arriving into Pinnacle Corrugated where the bulk of the simulation was held. The company, located in Landis, was still open for business while the emergency workers hauled “victims” onto stretchers and firefighters hosed down a derailed train car.
I’ve written stories about mock drills and was once the victim in a Salisbury Police Department SWAT training years ago, but as far as reality this makes the top of my list. Many of the victims in the crash are students at Rowan-Cabarrus Community College. Some are training to be nurse aides and EMTs.
Some of the instructors made very believable burns, cuts and other wounds appear. One victim in the drill was impaled, while another received burns.
I was strangely fascinated by one in particular. It was a deep cut to a volunteer firefighter who was covered in fake blood from his head, ears and fingertips. I hesitated posting a picture to Twitter and Facebook for fear someone would think it was real. I wished at that moment I could trade places with him. As gory as it may sound. I would’ve jumped right in.
Sometimes immersing yourself into a story gives you a unique perspective. If I’m writing a story on a fire cadet who goes up 50 feet in the air on a ladder truck, then why not go up too (with a safety harness, of course). I actually did just that. I even asked County Emergency Management Director Frank Thomason if I could be a victim during the next drill. I really do mean it. I vowed they could impale me, cover me in fake blood, I didn’t care.
The responders basically knew the general idea of what they’d encounter, but the idea was to make it as real as possible. This accident was as real as it gets.
There were panicked victims in the scenario crying and wailing in pain. One woman was very entertaining. She boo-hooed about just wanting to go to church and ending up in an accident instead. The back story on the drill was that a church bus collided with a train. She was both funny and credible. I heard one of the volunteers say “that’s how people really respond during a wreck. They are crying, in pain, delirious.”
It’s crucial that these types of training exercises take place. These men and women, many of whom are volunteers, place themselves in harm’s way everyday. Many more of them receive hours of training that enable them to free someone from a car, burning building or resuscitate the unconscious.
Landis Fire Chief Reed Linn called the exercise one of the largest scale training drills in the southern part of the county. As different kinds of disasters emerge, so will the need for similar large-scale training exercises. During a real disaster, it would take many agencies working together to save lives. I think if such a disaster were to occur, I’d want area emergency crews as prepared as possible. However, next time, I want to be a victim.
Shavonne Potts covers crime and breaking news in Rowan County.
Contact her at 704-797-4253.