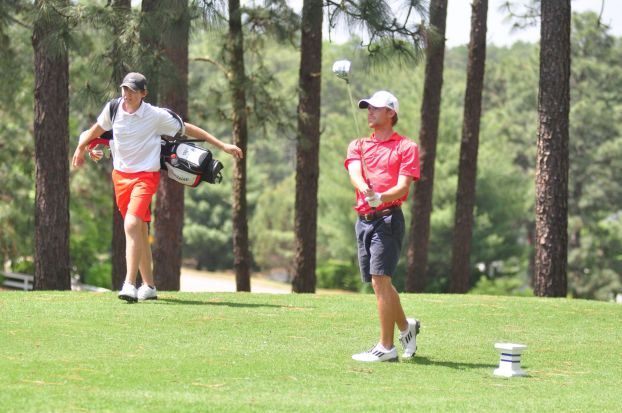 SOUTHERN PINES — Tripped up at the end.
That phrase might define Salisbury’s Eric Edwards’ play at state 2A golf championship if he’d let it.
Instead the senior said goodbye to his prep days with grace and decorum, a nod to golf’s regard for the opponent. It was a hot day at Longleaf Golf and Country Club, which made everyone sweat out those last couple holes.
“I hit the ball really well both days,” said Edwards, the runner-up with a two-day score of 142. “Probably the best all year. The last couple holes tripped me up both days. I got it to two-under today but it’s just so hard to keep it there and make a bunch of pars.”
Edwards tipped his cap to SouthWest Edgecombe’s Cole Jefferys Tuesday, as he one-upped Edwards with a 3-under par 68 in Round 2 for a 139 to win medalist and the individual state championship by three shots.
Salisbury wound up with a 626 to place third, one place better than last year. Newton-Conover won for the second consecutive season. Shelby was second.
“They’re both great teams,” Salisbury coach Dale Snyder said. “We just didn’t have the firepower to catch up.”
Edwards, who’ll play at George Mason next year, led the field by a stroke after firing a 69 on Monday. He followed up with a 73 Tuesday. Edwards led a Hornet team after winning the county championship and winning Central Carolina Conference Player of the Year.
“That’s a very good score out here especially with this wind,” Edwards said. “With a three-shot win, there’s a bunch of shots you could have cut off. I was trying to get my head out of it and go play and it seemed to help a lot.”
Edwards birdied Holes 5 and 7 to get to 2-under. He bogeyed 8 and 10 to reach even. He couldn’t reach a birdie the rest of the way. Bogeyes on 16 and 17 ended the tournament . Elliott Grayson of Shelby, who was in Edwards’ group, was a shot behind.
“No matter what the numbers say, I couldn’t be happier with Eric’s last four years,” Snyder said. “He’s such a great kid.”
The two-time county champ came close to winning individual medalist all four years, placing in the top three each time. Edwards finished second his freshman campaign and third in 2012 and 2013.
“I’m happy with how we played,” Edwards said. “We’ve been a family these last four years and it’s something you just can’t take away.”
Newton-Conover’s top four scores added up to 306 to give it the title again. Shelby checked in at 617. Salisbury won back-to-back titles in 2011 and 2012.
“Those years that we won it, we had the depth,” Snyder said. “This year, we surprised a lot of people. No one expected us to get third in the state.”
Salisbury junior Abraham Post improved from his Round 1 76 with a 75. Post began the day 2-under after six holes. Post juggled tennis and golf this season but hopes to just focus on golf next year. He improved his championship scores significantly from last year to finish 15th overall.
“I got off to a pretty quick start,” Post said. “I hit a few bumps, but still managed a pretty respectable score. I feel like I played as well as could have been expected given the wind.”
Chris Queen (83-80 163) had SHS’ third-best score. Gabe Steinman (87-83 170) was fourth. John Murphy (88-84 172) and Jacob Pryor (92-100 192) also scored for the Hornets.
Clinton (638) and South Stokes (644) were fourth and fifth as teams.