Millers Ferry board re-elected despite controversy 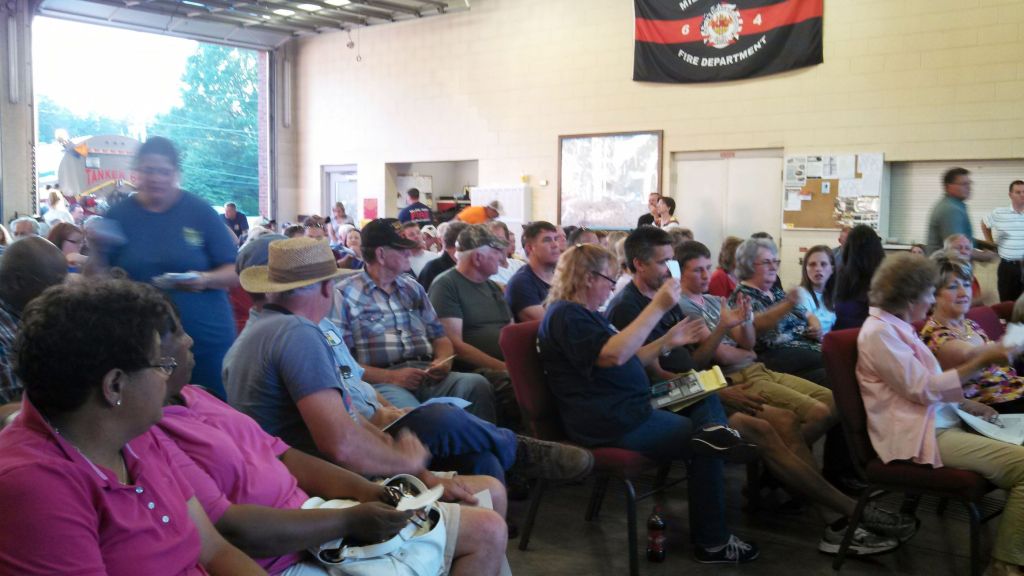 Kim Thorpe knows all too well what it’s like to wait more than 20 minutes for a medical responder. Three years ago, she waited after placing a 911 call from her home in the Anchor Downs subdivision. She has since moved, but supports a second fire station a few miles from the current Millers Ferry station at Long Ferry Road and about two miles from the subdivision.
Supporters of the new fire station say it will reduce response time to the Anchor Downs subdivision. The new station, which would be a bit larger than the current one, will include four bays while the current station has three and will likely include ambulance response or rescue squad personnel.
The new station was one of many controversial issues discussed at Monday night’s annual meeting of Millers Ferry Fire Department, where the community also re-elected all of the fire department’s board of directors.
Tensions rose following the placement of board members/officers, which include Barry Childers, Reg Gobble, Kim Boling, Ron Price, Deb Smith and Kim Starnes. The fire station was filled with supporters and opponents alike and at times got heated as people brought up issues of salaries, staff hours and firings.
Mike Gobble, who is a Millers Ferry volunteer firefighter, said he felt as though some of the same members should not have been allowed to return to the board. However, Fire Chief Bobby Fox said the community voted. Nominations were taken and an independent accountant counted each ballot while fire commissioners looked on.
Fox posted on his Facebook page who he planned to vote for and said there were some who set out to “destroy one of the best fire departments around.” All those he named in the post were re-elected. He encouraged others to support the community and the fire department.
Some said there was a need for a second station because of the long response time to areas, namely Anchor Downs, and because according to the ISO rating requirements a coverage area cannot exist beyond five miles of the station, which Fox said during the meeting.
“I don’t think it’s right. It’s a brotherhood. I don’t think they should fight,” Thorpe said.
She spoke during the meeting, becoming emotional about what she sees as a need for a second station. The new station, which is being built, is about 2.5 miles from the existing station and 2.5 miles from the Anchor Downs subdivision. The station will house at least eight fire personnel, some of whom will be moved from the current station. There will also be some room for growth. Fox said the two stations will fall under the same department. The fleet will be divided with three trucks and half the personnel at each station.
One resident, who did not want to be named, asked if the money to pay for the station would come from taxpayers.
“I want to know if it’s costing me,” the man said.
Fox said the new station, which will cost about $700,000, is being paid for with money that was re-appropriated after the department paid off two fire trucks.
Don Gobble, Mike’s brother, took issue with a previous board meeting, where he claims the board discussed and made decisions during an executive session meeting without informing the public of those decisions, which board member Kim Boling denied.