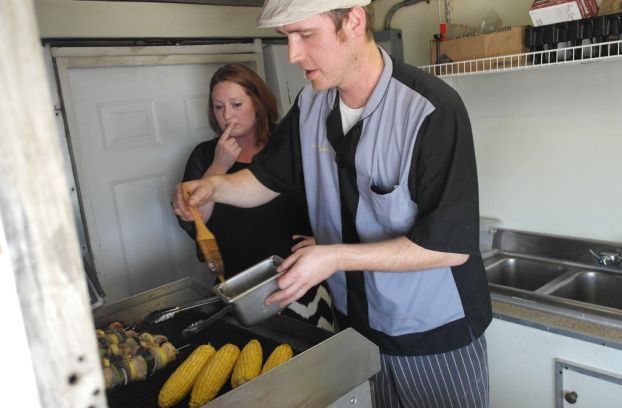 Kitchen Crashin’ with Tara at Kabobs

It is likely that you have been driving around Downtown Salisbury and thought to yourself, “Hey, what is that big orange truck?” The answer is Kabobs!

Kabobs is often stationed in front of Lee Street Theatre, and this is where I first encountered them.

I quickly learned of the Kabobs/Lee Street connection. The co-owner of Kabobs is the brother of Lee Street theatre’s artistic director, Justine Dionne. A few weeks ago, I was cast in the 10-minute play festival, “Office Hours,” and Justin and I were chatting and brainstorming, and we thought, “10 minute play festival. Hmm, what can we cook in 10 minutes?” Kabobs. Yes, Kabobs.

Enter Andrew Dionne and Jon Rojas, owners of the popular (and only regularly serving) food truck in downtown Salisbury.

The Kabobs mobile food truck made its Salisbury debut in March and has been a smashing success. Kabobs serves lunch and late nights, and crowds are flocking to it.

Jon and Andrew were kind enough to let me crash their kitchen, and they decided to teach me how to make Tropical Sweet and Sour Alligator Kabobs. The prep time for this recipe is about an hour to allow the meat to marinate and to make the glaze, but the actual cooking time is less than 10 minutes. The results were so tasty that I am emphatically encouraging Kabobs to add this recipe to their regular menu.

Jon and Andrew love combining flavors palates and food genres, and Jon is particularly drawn to alligator. He has a penchant for the exotic, and alligator is one of his favorite meats to cook with. Andrew refers to him as “our resident alligator expert.”

I have eaten alligator in New Orleans with plates full of crawfish, and I have had it deep-fried at a few chain restaurants. I am positive that I have never had “good” alligator tail before because it has always seemed a bit gamey and rubbery.

These kabobs were pretty spectacular. Marinated with citrus and garlic, grilled with red onion, squash, zucchini, and liberally brushed with a caramel glaze, these kabobs smell dreamy and tastes heavenly. The consistency of alligator is a bit like chicken, but melts in your mouth like slow cooked pork.

I did not know that alligator could taste like this! If you would like to try alligator, it can be found at Latino grocery stores in Rowan County or at the U.S. Foods Distributor in Charlotte, which is open to the public.

Now you have two reasons to go to Lee Street this week: go see the 10 Minute Play Festival “Office Hours” and grab some kabobs from Andrew and Jon. You will not regret either!

Combine alligator tail in a mixing bowl with sour orange juice and pineapple juice. Crush and mince the fresh garlic and allow to sit for 2 minutes to release the oils in the garlic. Add garlic to mixing bowl and marinade for at least 1 hour in refrigerator.

For the caramel glaze, melt the butter in a small sauce pan on medium heat and slowly add the sugar until it is fully dissolved. Add remaining ingredients and whisk briskly until fully combined. Remove from heat and set aside for grilling.

Pre-heat your grill and bring it to its highest setting. Liberally oil the grill and place kabobs diagonally across the grill. Brush the caramel glaze onto each kabob and flip and re-apply. Let sit on each side for about 2 minutes. Allow up to 6 minutes to cook through. Make sure to check texture as you grill; undercooked and overcooked alligator will have the consistency of rubber. Check frequently and pinch with tongs to see if the meat is breakable. Once the alligator kabob is tender and flakes when pinched, remove from heat and serve immediately.