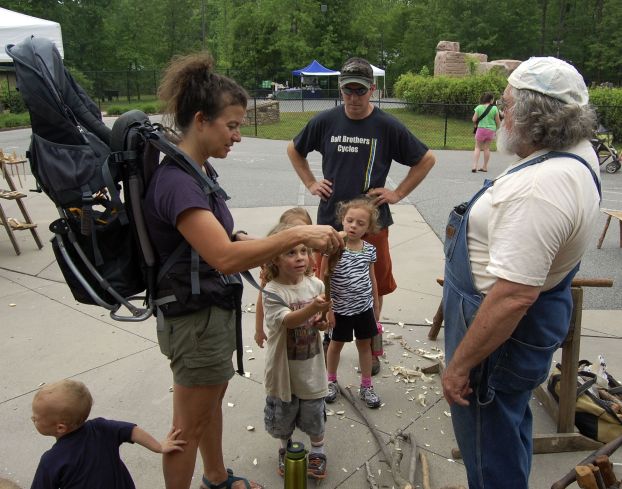 SALISBURY — Bobbi Rae Moose’s handmade soap at the Simple Living festival looked and smelled so good, you almost wish someone would wash your mouth out with it.
Moose cooked and stirred one of her newest concoctions, Woodsy Moose Soap, on a hot plate at the Back to Earth Products booth Saturday at Dan Nicholas Park. The soap looked like a cross between cake batter and taffy, but Moose assured people that this was one tough soap, made from oak bark tea and cedar oil and designed for hunters because it masks human scent.
“We love this festival,” said Moose, who lives in Mount Pleasant. “We have return customers every year.”
Other vendors were not quite as enthusiastic. Kate and Hazen Alward, owners of Buffalo Creek Handcrafts of Concord, made their first appearance at Simple Living, which has been running for eight years. Kate Alward said business on Saturday was slow.
“No one we talked to knew this was going on,” she said.
Alward said organizers should try to do a better job of spreading the word in Rowan and Cabarrus counties and recommended more advertising and marketing for the festival.
Bob Pendergrass, the Nature Center supervisor at Dan Nicholas Park, said several factors combined to make this a difficult year for Simple Living. The blacksmiths could not come at the last minute due to an injury, and Simple Living fell on the same day as a similar festival in Gold Hill, which probably thinned the crowd as well as the vendors.
Most people browsing through booths at Simple Living said they stumbled upon the festival while they were at the park for other reasons.
Celeste Killar and her family traveled from Waxhaw to pitch a tent at Dan Nicholas for the first time and found Simple Living.
“It was a little bonus,” she said as she picked out her Mother’s Day gift, a carved walking stick from artisan Stephen Martin’s Orchard Grove of Rockwell.
Killar said 4-year-old Kyler and 2-year-old Knox had such a good time camping that she and husband Chris Killar plan to return to Dan Nicholas.
The festival featured several bands and musicians, as well as programs on sustainable living and alternative energy sources. Ken Clifton, an instructor at Rowan-Cabarrus Community College, explained how solar power works, and Ben Mynatt Nissan had an electric car at the event.
Several vendors said they plan to return for Autumn Jubilee, the park’s largest arts and crafts show in the fall. Moose said she has created another new soap just for the jubilee using cinnamon, cloves and pumpkin to come up with the perfect fall scent, similar to pumpkin pie.
Just don’t eat it.

KANNAPOLIS – The sun shone, the thunder rumbled, but nothing stopped the people of Kannapolis from getting Jiggy this weekend.... read more