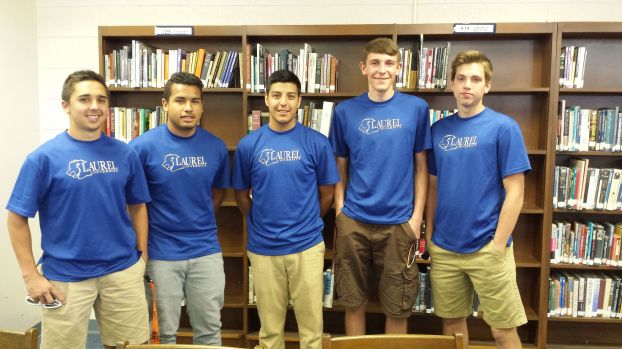 CHINA GROVE — It began with Carson assistant soccer coach Kyle Neal’s search for a college where his brother could continue his soccer career.
It mushroomed into something much larger, and now three Carson Cougars and two South Rowan Raiders have an opportunity not to just keep playing soccer together but to earn college degrees together at Laurel University in High Point.
Carson graduate B.J. Collins is Neal’s brother. He’ll be joined at Laurel by Carson seniors Garrett Owens and Fox Correll and South seniors Angel Dominguez and Tony Ramirez.
Collins and Correll are familiar names, even if you follow Carson football and not soccer. They’ve handled field goals and PATs for the Cougars the past three seasons.
Owens, a defender, Dominguez, a forward, and Ramirez, a goalkeeper, were all-region picks by the North Carolina Soccer Coaches Association last fall and all five athletes have earned all-conference and all-county accolades.
The players have known each other and played with and against each other for a while. The soccer relationship between Correll and Owens, for instance, goes all the way back to fourth grade.
Laurel will be in a start-up mode this fall. It will be the debut soccer season for a school that was recently known as John Wesley College. Zac Pierce, who starred at Ledford and who has 30 years of soccer experience and 20 years of coaching experience, will guide the blue-clad Laurel Lions,
“It’s going to be a big plus to have five guys who not only have played together but like each other,” Pierece said. “They already have a relationship. They’re very good players, and we’re glad to have them.”
Owens and Correll helped head coach Justin Buckwalter’s Cougars break through for a championship season last fall. South hasn’t been as strong as the Cougars, but Ramirez and Dominguez have been universally praised as South’s two top players.
Collins had planned on a military career after he graduated, but it was hard for him to shake the soccer bug.
“I knew I still wanted to play soccer if there was a chance,” Collins said. “It’s what I love.”
Neal made calls and sent out waves of emails. Laurel, a small Christian-oriented school with 385 students and 18 staff members, responded. Laurel offered a campus visit accompanied by a tryout.
The players showed their stuff, meshed well with other recruits, and will receive some scholarship money.
“It’s just too good a chance to pass up,” Collins said.
Laurel is getting a wide variety of players.
Owens is a former keeper. He played in goal before injuries forced Carson to make adjustments his junior year. That’s when he went out on the field and emerged as a talented defender.
“He’s tall (6-foot-3), he’s strong in the air, and he’s got a very strong leg to clear the ball,” Neal said. “He kicks it a long way. He scored two goals from 45 yards out.”
Collins is a 6-footer with solid all-round skills.
“He’s passionate and hard-working and he can play about anywhere on the field,” Neal said. “He’s got natural leadership qualities and his confidence is growing by leaps and bounds.”
Correll was an immediate star his freshman year, scoring 10 goals for the Cougars. But then he suffered a back injury,
“It was a vertebrae injury and I was in a back brace and had to take six months off from soccer,” Correll said.
He came back as a junior and earned a reputation as a guy who scored clutch goals.
“Huge goals in key conference games and a big one to force overtime in the South Iredell playoff game,” Neal said. “He’s a creative scorer.”
While Dominguez and Ramirez play for South — Carson’s rival on the other side of I-85 — both players are highly respected by the Cougars and Dominguez and Ramirez have teamed with the Carson guys on club teams.
“Angel is known for his instincts around the box,” South coach James Basinger said. “There are times when he will do something totally unexpected, magical almost.”
While Dominguez has been South’s scorer — 11 goals as a senior — Ramirez has kept South in games by being a bulldog in goal.
“Tony is one of the most dedicated and humble kids I’ve ever worked with,” Basinger said. “He has great technique, but what separates him is that drive to just not get beat.”
Both Raiders are excited about the opportunity to play next-level soccer.
“It’s a chance to show our potential and to keep improving our skills,” Ramirez said.
And what’s it going to be like playing with Cougars?
“From club soccer, we know how everyone in this group plays and we already have some chemistry together,” Dominguez said. “This a chance to keep progressing in soccer and to a get an education.”
It’s possible that one of the recruits will score the first goal in Laurel history, and Ramirez may have a chance to record the school’s first win and first shutout.
“I’m excited for all five of them,” Basinger said. “They’ll be part of building a program. They can complete a college degree and be a part of history — and all for the love of the game.”