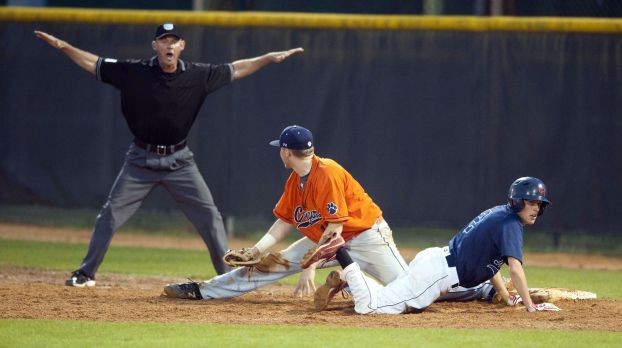 CHINA GROVE — Three Rowan County teams have won 20 games this season, something that’s never happened before, even in a county known statewide for quality baseball.
Salisbury and South Rowan both topped 20 wins in 1984; South and North did it in 1996; East and West did it in 1997; and North and East accomplished the feat together in 2000,
But never three schools at one time. Not until this year, at least, when Carson (21-6), East Rowan (21-7) and South Rowan (20-6), three teams from the 3A South Piedmont Conference, got it done.
Carson’s season was expected, East’s success has been a mild surprise, and South’s season has been a shock.
•

East has put up almost as many 20-win seasons (12) as the rest of the county combined over the years, and the Mustangs (20-7) have enjoyed the county’s best season in 2014. They have the SPC regular-season and tournament-championship trophies to prove that.
Catawba-bound lefty Connor Johnson (9-0) has been the county’s dominant hurler, striking out 105 while walking 18. Opponents are batting .161 against Johnson, and his ERA is 1.26.
East second baseman Michael Caldwell (26 runs), outfielder-turned-catcher Luke Setzer (four homers) and shortstop Ike Freeman (23 RBIs) are on the list of county player of the year candidates.
If there’s a well-kept secret about the Mustangs, it’s that opponents are batting .178 against East’s No. 2 starter Chase Jarrett. If Jarrett can work ahead of hitters, he has the stuff to pitch shutouts.
While East is ranked a modest 27th in the state by MaxPreps, Johnson and Jarrett, with some help from Joseph Peeler and Harrison Bell, make the Mustangs a contender to win it all.
•

Carson (21-6) is about pitching, pitching and more pitching, and pitching is such a high percentage of baseball that the Cougars can’t be ruled out of the state-championship hunt despite three losses to East and a loss to South in an Easter tournament championship game.
Heath Mitchem and Dylan Snider, Carson’s No. 4 and No. 5 pitchers, would be the aces on some other staffs. Senior right-handers Dillon Atwell (7-2, 2.27 ERA), John Daugherty (6-2, 1.74) and ECU-bound Colton Laws (5-2, 0.93) have combined for 167 strikeouts and 44 walks. There can’t be many 3A schools in the state that can match Carson’s mound depth.
Carson is ranked 50th statewide by MaxPreps, but if the Cougars can just scratch out two runs a game in the playoffs, they’re going to be a tough out.
Carson is 15-0 against teams not from Rowan County. That’s something to keep in mind as the Cougars move forward.
•

South, ranked 53rd by MaxPreps, has pulled out some amazing victories, so there’s a general perception that it’s been all mayhem and magic for the Raiders, but South split two with East and four with Carson, so it has to be taken seriously in the state playoffs.
South right fielder Tyler Fuller (.402) has been one of the county’s top players and leads the Raiders not only in runs, which you’d expect from the leadoff man, but in RBIs, which is close to impossible for a leadoff man.
South has no certified pitching ace, although young lefty Blake Johnson (6-0) has been baffling more often than not.
What South does have that doesn’t always get talked about is above average team speed and above average team defense. They take extra bases, they make some awesome plays, and they find ways to win games that maybe they shouldn’t.
•
West is just 13-9 and enters the playoffs as the SPC’s No. 5 seed, but it is dangerous. Everyone agrees on that.
Michael Ball and Omar Bautista give the Falcons two aces, while third baseman Juan Garcia, catcher Michael Pinkston and right fielder Harrison Baucom have as productive offensively as anyone in the county.
West split its two-game series with South, Carson and Cox Mill and went to the wire with East.
• North Rowan (9-13) is in the playoffs as the CCC’s No. 3 seed. Chance Mazza and Jake Pritchard have been the offensive catalysts for the Cavaliers. Lefty Brandon White will take the ball for the Cavaliers. He’s competitive and smart and he’ll give North a chance at a first-round upset.
•
When Carson lost to East 4-3 in the SPC tournament championship game on Friday, it was a fairly typical matchup for the county’s top clubs. Both teams managed just three hits against tough pitching, and the game was ultimately decided by defensive breakdowns.
“We’ve just got to remember how bad this feels because if we have to feel like this again, it’s going to be the last time for this group,” Carson coach Chris Cauble said.
•