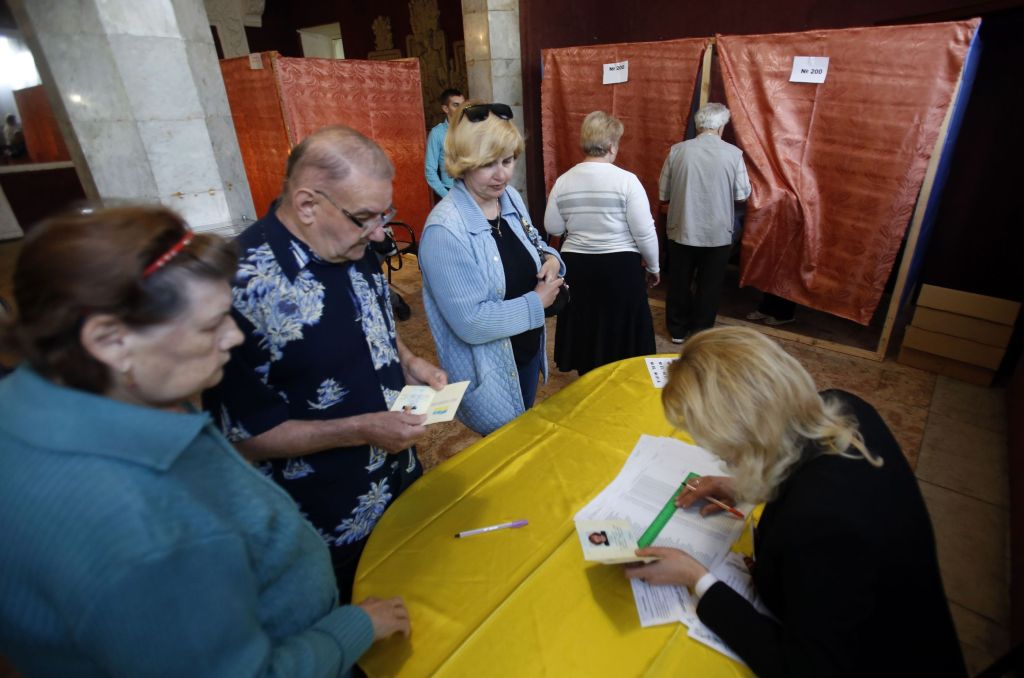 DONETSK, Ukraine (AP) — Ninety percent of voters in a key industrial region in eastern Ukraine came out in favor of sovereignty Sunday, pro-Russian insurgents said in announcing preliminary results of a twin referendum that is certain to deepen the turmoil in the country.
Roman Lyagin, election chief of the self-styled Donetsk People’s Republic, said around 75 percent of the Donetsk region’s 3 million or so eligible voters cast ballots, and the vast majority backed self-rule.
With no international election monitors in place, it was all but impossible to verify the insurgents’ claims. The preliminary vote count was announced just two hours after the polls closed in an election conducted via paper ballots.
A second referendum organized by pro-Russian separatists was held Sunday in eastern Ukraine’s industrial Luhansk region, but no immediate results were released.
Ukraine’s central government and the West had condemned the balloting as a sham and a violation of international law, and they have accused Moscow of orchestrating the unrest in a possible attempt to grab another piece of the country weeks after the annexation of Crimea.
The results of the two referendums could hasten the breakup of the country and worsen what is already the gravest crisis between the West and Russia since the end of the Cold War.
Although the voting in the two regions with a combined population of 6.5 million appeared mostly peaceful, armed men identified as members of the Ukrainian national guard opened fire on a crowd outside the town hall in Krasnoarmeisk, and an official with the region’s insurgents said people were killed.
The bloodshed took place hours after dozens of armed men shut down the voting in the town.
The shooting starkly demonstrated the hair-trigger tensions in the east, where pro-Russian separatists have seized government buildings and clashed with Ukrainian forces over the past month.
Even before the results were announced, Ukraine’s Foreign Ministry called the twin referendums a “criminal farce.” The U.S. and other Western governments said they wouldn’t recognize the outcome.
Earlier in the day, the head of the referendum organizers in Donetsk said the ultimate status of the region would be discussed later and would include the possibility of secession or annexation by Russia.
“We are just saying to the world that we want changes, we want to be heard,” election commission head Roman Lyagin said.
The violence in Krasnoarmeisk, about 20 miles from the regional capital, Donetsk, came hours after armed men, one of whom said they were from the national guard, put a stop to the voting and took control of town hall.
In the evening, more armed men arrived in a van, and a scuffle broke out with people gathered around the building. Then the men fired shots.
Over the past few weeks, the Ukrainian government and the West have accused Russia of trying to destabilize the country or create a pretext for another invasion. Russia — which annexed Ukraine’s Crimean Peninsula just days after voters there approved secession in a March referendum — has rejected the accusations.
Russian President Vladimir Putin had asked the organizers of the latest referendums to delay the vote in an apparent attempt to ease the crisis. The insurgents refused.
At one polling station at a school in Donetsk, turnout was brisk in the first hour of voting. All voting slips that could be seen in the clear ballot boxes showed that self-rule had been selected.
Most opponents of sovereignty appeared likely to stay away from the polls rather than risk drawing attention to themselves.
Darya, a 25-year-old medical worker who would not give her last name, said she saw no point in casting a ballot, since the vote had no legal force.
“There were no notices about this referendum anywhere, about where and when it was happening,” she said. “In any case, it is not valid, so there was no reason to take part.”
There were no immediate signs of any outright intimidation by pro-Russian forces Sunday, and insurgents near the polls were not wearing their usual balaclavas.
The haphazard nature of the referendums was in full display at Spartak, a leafy village on the fringes of Donetsk.
Villagers were unable to vote for about three hours after the polls opened because election officials failed to bring a ballot box. Finally, an election organizer arrived with a voting urn crudely fashioned from cardboard boxes and sealed with tape.
Most present said they were voting in favor of autonomy and against the interim government headed by acting President Oleksandr Turchynov. One said she would not take part in a nationwide presidential election set for May 25.
“I don’t agree with what is happening in the country. And I want some changes for the better. What is happening on May 25 is not honest, truthful or in our best interests. And that is why I am voting today,” said Irina Zelyonova, 30, cradling her baby in her arms.
Turchynov and Ukraine’s caretaker government came to power in February following the ouster of Kremlin-friendly President Viktor Yanukovych after months of protests in Kiev. Moscow and many in Ukraine’s east have accused the new government of intending to trample the rights of eastern Ukraine’s Russian-speakers.
More than 30 people have been reported killed since Ukrainian forces began trying to retake some eastern cities from the insurgents.