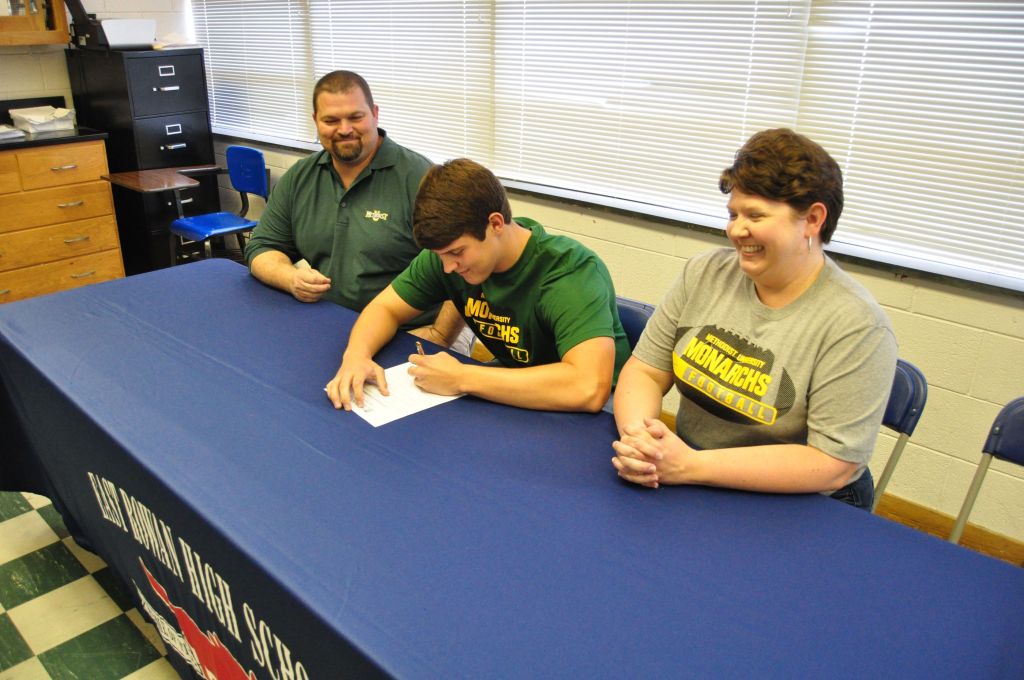 GRANITE QUARRY — In what would have surely been the landmark moment of his prep career, East Rowan’s Michael Collins didn’t quite make it.
Collins was tackled about 10 yards short of the end zone after picking up a fumble against Salisbury in a game last year. Dock Corpening stripped SHS quarterback Riley Myers deep in his own territory and Collins was in the right place at the right time. He hopes Methodist College is also the right place for him.
“I wish I was a little bit faster,” Collins said.
Collins will complete the trip this fall to Methodist in time to play for the Monarchs. He’s not a name that’s been circulated, but the soft-spoken Collins is fine with that. He’s asserted himself his senior year and now is reaping the benefits.
“I’ve been planning to play college football,” Collins said. “I just didn’t know if I could make it or not.”
Collins, 5-foot-11 and 195 pounds, wasn’t on the radar of many colleges but put in the effort in the weight room and gained enough pounds to make himself attractive enough to join the Granite Quarry-to-Fayetteville pipeline.
Collins has played linebacker since elementary school. The challenge now will be to resume adding size to take on college-level offensive fronts. Collins will turn 18 this summer so he’s still got time to learn and grow.
Against West Rowan last year, Collins fired through the offensive line without resistance and put his head right in the middle of the running back’s chest as soon as the ball was handed off.
The play is called a ‘mash’ where linebackers cross on a blitz and Collins executed perfectly.
“Michael did that often,” East assistant Jason Barnes said. “He’s a solid high school football player. I think he’s going to do nothing but get better.”
Barnes was impressed by Collins’ work ethic and drive during practice sessions and gym workouts.
“This year, he’s probably put on about 12 pounds in the weight room,” East assistant Jason Barnes said. “His numbers have gone up, he’s faster. Everything about him is different compared to how he was last year.”
Collins throws the shot put and discus and in track and used to run on the relay teams. He’s the cousin of West Rowan’s Will Collins.
Teammate and linebacker Austin Hill will be joining Collins at Methodist. Collins says he’ll room with East offensive lineman Skyler Rabon.
The last two years, East Rowan’s defense included fellow college players Donte Means, who signed with Catawba the same day Collins made his announcement, along with Tyler L’Hommedieu, Dock Corpeneing and T.J. Jefferson.