Brothers both teacher of the year 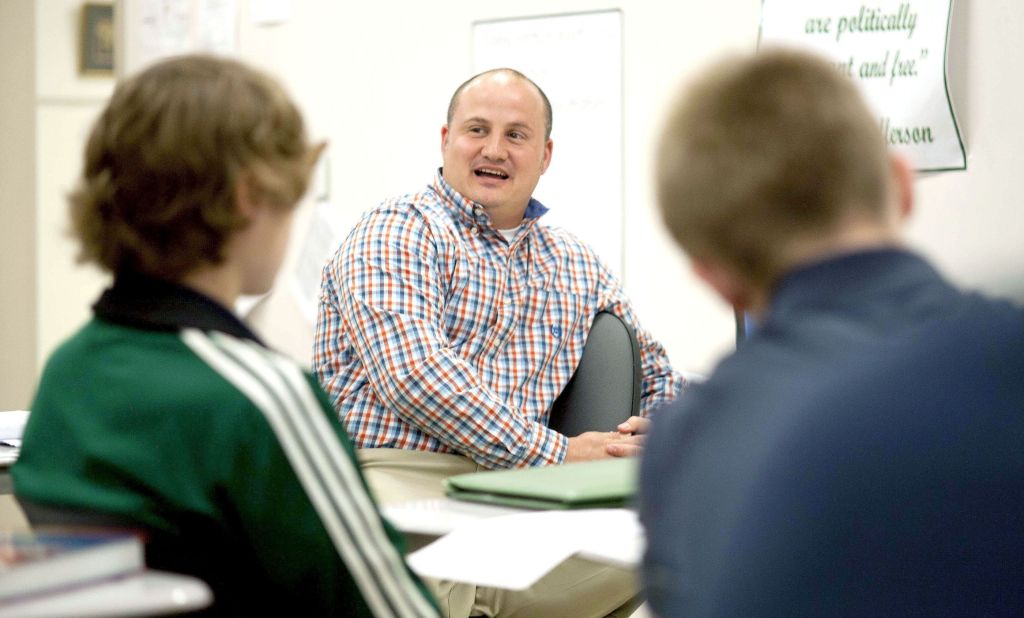 Cory and Brett Stirewalt have a lot in common. Not only are they brothers, they both teach and love baseball. They’re also both teacher of the year at their high school alma mater.

Cory teaches AP U.S. government and politics, AP comparative government and politics, economics and honors civics and psychology classes at A.L. Brown. He coached varsity soccer and junior varsity baseball at A.L. Brown up until three years ago when he decided to stop so he could spend more time with his family.
Brett teaches geometry and AP statistics at South Rowan High School, where he is also the head junior varsity baseball coach.
Brett said the two are always giving each other a hard time about their school’s teams.
“To be honest,” he said, “I want A.L. Brown to win every game but one.”
Cory’s last year coaching, the brothers’ baseball teams played each other twice.
“We split,” Cory said. “We are officially one and one.”
Cory and Brett frequently moved around, but spent most of their childhood in Cabarrus and Rowan counties.
The brothers, who are six years apart, weren’t particularly close growing up.
“I was a pest,” said Brett, the younger of the two.
“He was the responsible one and I was the playful one,” he added.
“As an older sibling, you want to set as much of a standard as you can,” Cory said.
Their parents divorced in 1989, but worked hard to set their sons up for success.
“We didn’t have a whole lot, but they provided what we needed,” Cory said.
Neither of their parents finished college, but they emphasized education. Although they moved around a lot, their parents tried to make school as consistent as possible.
Both attended A.L. Brown for a while in high school. Cory graduated from there, but Brett ultimately graduated from South Rowan.
Once they both went to college, the brothers agree, their relationship deepened significantly.
Brett said he’s always looked up to Cory, from their childhood to when he went to college and even now.
“The time he spent coaching, he spends in his classroom,” Brett said.
Cory also thinks highly of his younger brother.
“He is unbelievably dedicated to these kids,” Cory said, as he talked about the hours Brett puts in after school and on Saturdays.
“He’s matured ridiculously over the past six years,” he said, adding, “The change is unbelievable.”
Brett said it’s important for him to build relationships with his students.
“They need to feel comfortable,” he said.
Brett explained that comfort level allows them to ask questions and learn.
“You teach kids, you don’t teach the subject,” he said, adding that the subject doesn’t change, but the students do.
Cory said he doesn’t know what his secret to success is.
“I just do my job,” he said, but added, “I love what I do.”
Cory said he works to keep his students as engaged as possible to keep them coming back for more.
“You have to balance personality with rigor,” he said.
Cory said he’s passionate about the subject matter he teaches, especially civics.
“It’s all real world,” he said. “It’s going to impact them the rest of their lives. It’s a subject they can get involved in.”
Cory went to Lenoir-Rhyne to major in biology, but soon discovered he and chemistry “didn’t agree.”
He enjoyed his world civilization classes, so he decided to change his major to history his junior year.
“I’d always had a love of military history,” he said.
Even though he changed his major as a junior, Cory worked hard and was able to graduate on time.
“I was the first one in our immediate family that finished college,” he said.
Cory took a year off after graduation.
“I didn’t really know what I wanted to do,” he said.
During that year, he started substituting and was encouraged for a full-time job.
Cory received a lateral-entry teaching job at Tuttle Middle School in Maiden, which allowed him to begin teaching while he took classes to receive his teaching license.
After a year at Tuttle, Cory returned to A.L. Brown as a teacher.
Cory said he considered applying the year before, but Brett was still a student at the school, and he didn’t want to be a teacher where his brother was a student.
Cory and his wife, Miriam, have been married eight and a half years, and have a son and a daughter. Caleb is 5 years old and Claire is one month old.
Cory no longer coaches baseball on the high school level, but he does coach his son’s little league team.
Cory just received his master’s degree in secondary social studies education from the University of North Carolina at Charlotte, where he also received his certification to teach academically or intellectually gifted students.
Brett received a Teaching Fellows scholarship and went to Appalachian State University. After a year, Brett realized his study habits weren’t what they needed to be, so he went to Wilkes Community College for two years, where he played baseball and met his wife, Lauren.
After those two years, he returned to Appalachian and received his bachelor’s of science in mathematics, secondary education.
“To be honest, I didn’t know what subject I wanted to teach,” he said.
As Brett weighed the options of what he wanted to do, he decided he had the best chance of getting a job if he taught science or math.
He always got along well with math teachers, so he decided to teach math.
Brett began teaching five years ago, after he graduated from college.
Brett and Lauren have now been married nearly three years.
Between teaching and coaching, Brett said they don’t see each other nearly as often as they would like, but that Lauren is a huge support.
“She’s awesome. I couldn’t ask for a better wife or a better friend,” he said.