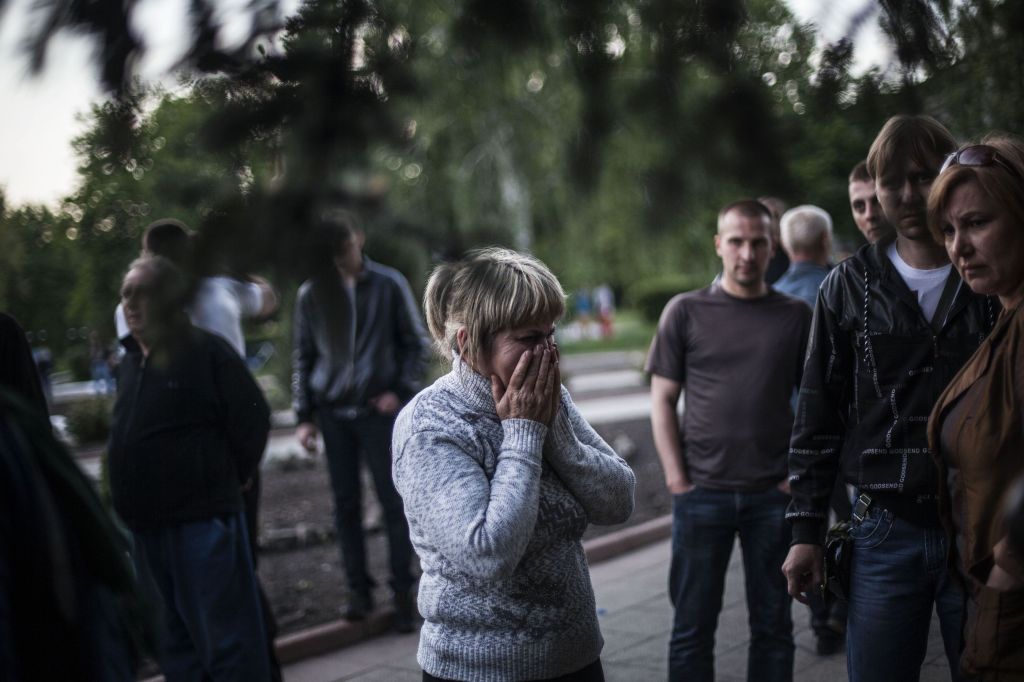 KRASNOARMEISK, Ukraine (AP) — Armed men identified as Ukrainian national guard opened fire Sunday on a crowd outside a town hall in eastern Ukraine, and an official for the region’s insurgents said there were fatalities.
The bloodshed in the town of Krasnoarmeisk occurred hours after dozens of armed men shut down voting in a referendum on sovereignty for the region. One of them identified the group as being national guardsmen.
An Associated Press photographer who witnessed the shooting said two people were seen lying unmoving on the ground and insurgent leader Denis Pushilin was quoted by the ITAR-Tass news agency as saying there were an unspecified number of deaths.
Several hours earlier, the men came to the town about 20 miles from the regional capital, Donetsk, and dispersed referendum voting that was taking place outside the town hall and they took control of the building. In the evening, more arrived in a van and a scuffle broke out with people who were gathered around the building. Then they fired shots.
Witnesses to the shooting posted a number of videos on YouTube. One of the videos shows several armed men holding AK-47s yelling to the crowd “go home, get out of here.” One then cocks his weapon, and seconds later a man from the crowd steps forward and approaches another gunman, also carrying an AK-47, to speak with him. The gunman fires a warning shot over his head, but that doesn’t deter the man. He continues to approach as shots continue and the man is struck by a bullet, falls to the ground and can be seen bleeding from his leg.
The video, shot by someone at the scene of the confrontation, has been authenticated based on accounts by AP journalists at the site and was consistent with AP’s own reporting on what happened.
Eastern Ukraine has been gripped by unrest for the past month as pro-Russia insurgents occupied police stations and government buildings. Ukrainian forces have mounted a limited offensive to try to drive them out.
The Donetsk and Luhansk regions on Sunday conducted referendums on declaring the regions as so-called sovereign people’s republics. Leaders of the vote, which is regarded as illegitimate by the central government and the West, say that sometime after the referendum, a decision will be made on whether to remain part of Ukraine, declare independence of seek annexation into Russia.