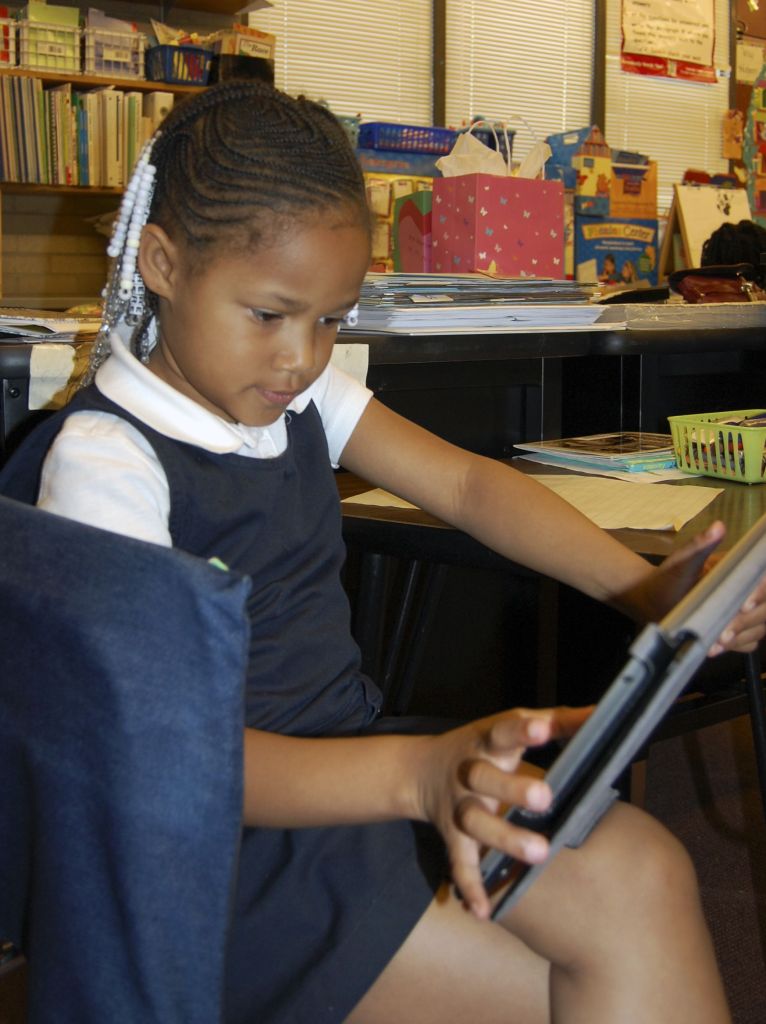 During the Rowan-Salisbury Board of Education’s meeting Monday, district officials announced their goal to have digital devices in the hands of each teacher and student by the end of the 2014-15 school year.
Overton Elementary is one of the few schools in the district that already has a one-to-one ratio of students to digital devices.
“Our classrooms are more engaged,” said Chris Painter, Overton’s technology facilitator.
He added that the school has seen a “slow drop” in discipline issues and “more rigorous” classrooms.
While learning games and applications that drill or test skills are useful, Painter explained that Overton teachers try to use the mobile applications that allow students to “create something totally new.”
Painter said a one-to-one technology program “can transform a community.”
While there’s no way to know what jobs these students will be competing for down the road, providing a solid technological foundation for them will have a long-term impact.
Seeing the advantages of a one-to-one school district should also bring new families to Rowan County and will ultimately produce local graduates with strong technological skills and bring more jobs to the area.
“I can’t imagine the kind of impact it will have on the count,” Painter said.
The plan laid out would give teachers MacBook Air laptop computers before they leave for the summer. They would use the summer to get used to the devices and complete professional development, which is “essential to implementing a successful one-to-one,” said Rowan-Salisbury Director of Digital Innovation Andrew Smith.
It will also give them time to start migrating existing lessons and creating new lesson plans.
In the fall, students in the ninth through the twelfth grade would also receive MacBook Air laptops.
Sixth, seventh and eighth graders would receive iPads sometime this winter and third through fifth graders would receive them in the spring. Kindergarten, first and second grade classrooms will share iPad carts with enough devices for a full class between several classrooms. Kindergarten through eighth grade teachers will also receive iPads when their students do.
Students and teachers will be able to take their devices home.
Smith said they have yet to determine how many carts each school will get, but he did say sharing the devices will allow younger elementary classes to “collaborate in real meaningful ways.”
According to Smith, middle and elementary schools will have shared laptop carts on hand as well.
“Computer labs will start to phase out because kids will have devices in their hands,” Smith said, but he added they won’t totally disappear.
“You can’t do everything on an iPad,” he said.
Because some career technical education classes require PC labs as a part of their curriculum, those labs will stay.
The district plans to repurpose and realign funds already in the budget to cover the $12 million fee to lease the devices from Apple over a three-year period. Because of this, the district will not need to ask for any additional money to fund the project.
“We just want to use our money differently,” Superintendent Dr. Lynn Moody said at Mondays meeting.
“There’s a lot of those things we don’t need when we go one-to-one,” explained Rowan-Salisbury Chief Financial Officer Tara Trexler.
Printing and paper costs, computer labs and workbooks are just a few of the expenses that will either be drastically cut or eliminated with the one-to-one implementation, she added.
According to Trexler, the district would be leasing roughly 8,500 MacBook Air laptops and iPads, for a total of 17,000 devices.
Although she hasn’t received exact figures yet, Trexler estimates that including insurance, laptops will cost $920 each and iPads will cost $345.
Although no additional funds will be needed, the expense that must be approved by Rowan County Commissioners before the school system can proceed with the lease.
“We can’t put these in the hands of teachers if we don’t have a lease agreed on,” Assistant Superintendent of Curriculum Dr. Julie Morrow said.
The district is still considering a variety of options to insure the devices.
One option is using AppleCare from Apple, which includes a telephone hotline and accidental damage coverage with a small deductible paid with a student usage fee.
Students with laptops would have an annual fee of $50, and those with iPads would have a $25 annual fee. Students who couldn’t afford the fee would be covered by private sponsorships.
Technology staff is still deciding exactly how to handle insurance, fees and sponsorships, but say they’ll have details well before they roll out the devices
In addition, each iPad will have a heavy-duty protective case, and district technology staff is still deciding whether or not to use cases for the laptops.
District technology leaders are building a filtering system that allows students and teachers the appropriate amount of content freedom for their age and position.
For example, middle and high school students might study anatomy in class and need access to appropriate materials online, Smith said.
“We wouldn’t want that material in a first-grade classroom,” he added.
Teachers would have even more access than students.
“That’s still a pretty fluid piece,” Smith said, as he explained that the filtering system will be one of the final pieces the technology department puts together.
Currently, student’s access to digital devices varies between schools.
Some schools give the teachers access to shared carts of iPads or laptops, and at least four schools have a device for each child.
“They use it all day long and bring it back in the afternoon,” Smith said.
The new plan will give “equal access” to every child and will provide a “seamless transfer” and consistency between each school, Smith said.