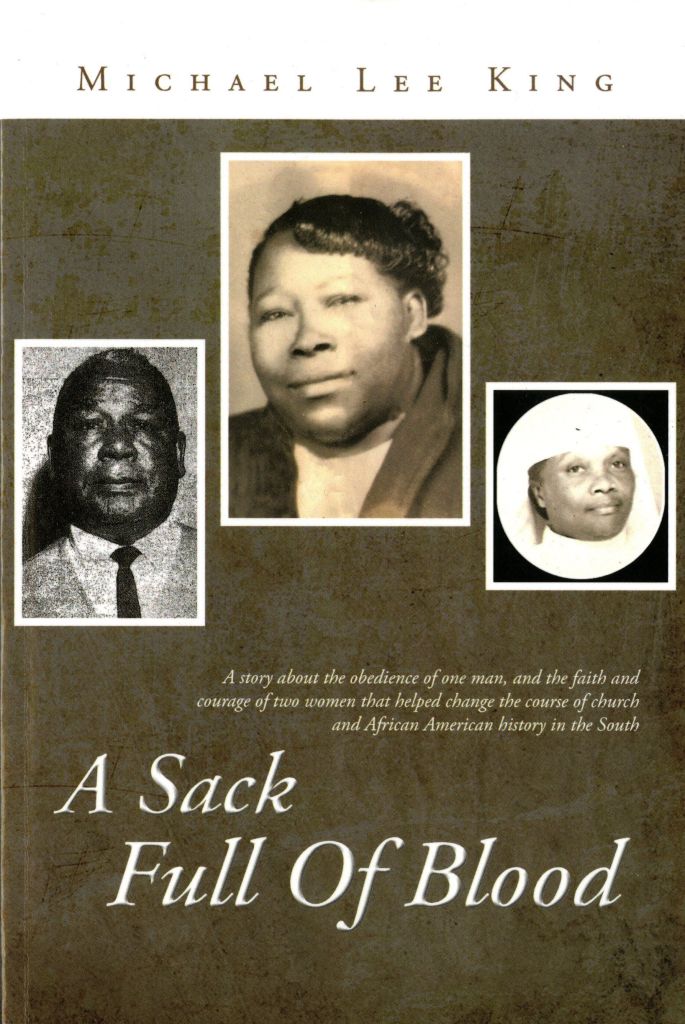 Michael Lee King, who has been a teacher and attorney, is fulfilling a call to minister to people and sharing a family story of dedication to the church in his new book. “A Sack Full of Blood.”
He calls the book the “historical remembrance of events concerning the obedience of a former twelve year old, runaway boy, Leroy Mills, which later combined with the obediences of a former 12 year old, runaway girl named Hattie Mae Caldwell.” King says their enthusiasm for the Lord, in conjunction with that of Carrie Francis Jones, “changed the religious and African American culture of the all male dominated church and social order of the South.”
Hattie Mae, who later became Hattie Mae Grier, formed a church whose legacy extends to this day. Her daughter, Geneva Mae, took over when her mother passed away. Momma Hattie Mae, as she was known, worked miracles at churches and creeksides in the 1940s and 1950s, baptizing many people. Her church became part of the Emmanuel Pentecostal Church of Our Lord of the Apostolic Faith Inc., and the church’s name was eventually changed to reflect her influence to Emmanuel Grier Memorial Pentecostal Church.
King pastors Damascus Church, of the Emmanuel Churches, and performs bishopric duties for the churches founded by Bishop Leroy R. Mills in Florida. He also teaches with Bishop Robert Lee Huey Jr. of Charlotte.
The action takes place around Rowan County and reads as a testimony and witness to the hard work of African American people of faith. Male and female, they were so inspired by the Holy Spirit that they could not deny their path in life and went on to heal and lead people in their communities.
King will be at Literary Bookpost & Just the Thing to discuss and sign his book on Saturday, May 17, from 1-3 p.m. The store is at 110 S. Main St.