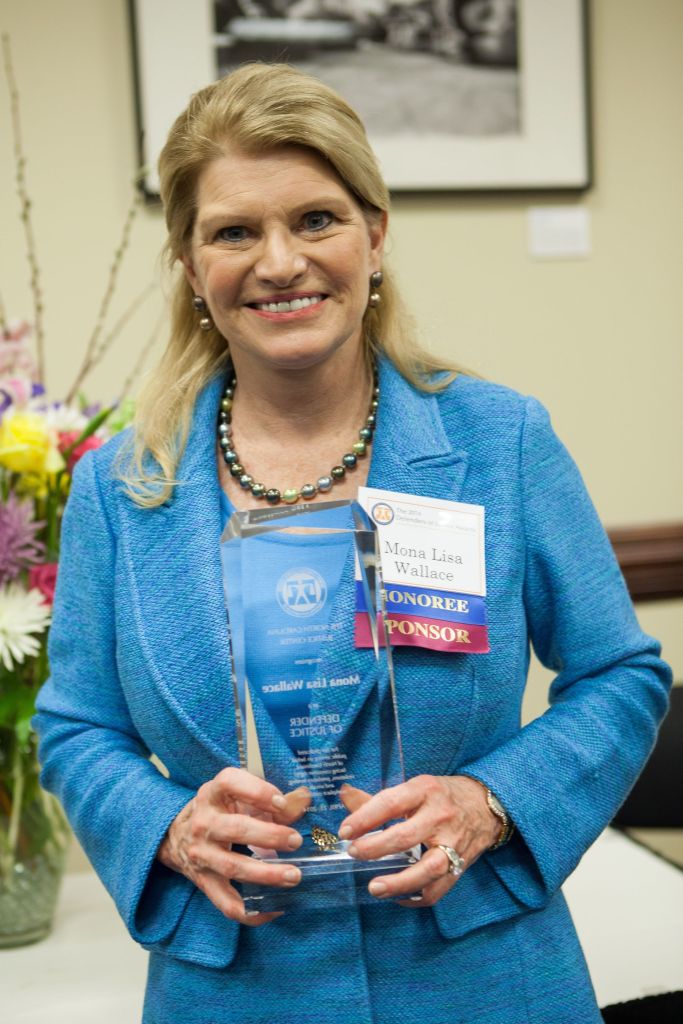 The N.C. Justice Center has honored Salisbury attorney Mona Lisa Wallace with a Defenders of Justice Award for her work spanning more than three decades fighting for North Carolina workers.
Wallace received the award April 22 at the William and Ida Friday Center at the University of North Carolina at Chapel Hill during the 16th annual Defenders of Justice Awards ceremony.
For more than 30 years, Wallace’s work has focused on worker and consumer rights issues, addressing consumer protection and fraudulent sales practices and loans. A partner in the law firm of Wallace & Graham, Wallace represents North Carolinians who have been victim to unsafe workplace conditions, consumer rights violations and predatory lenders who trap low and middle class families in unscrupulous loans.
A native of Rowan County, Wallace is a graduate of UNC-Chapel Hill and the Wake Forest University School of Law. After graduation, she started a legal practice and began getting requests from Duke Power employees who had been exposed to asbestos in the power plant where they worked.
Wallace was soon at the forefront of this issue in North Carolina, representing thousands of employees who had been exposed to asbestos.
Fighting for working people became the theme of her career. She has represented Duke employees in pension cases, retired steel workers fighting for health benefits at AK Steele, and victims of occupational cancer who have been exposed to dangerous chemicals and products in their workplace.
Wallace is currently embroiled in an environmental justice case in Duplin County, where she alleges that minority communities have been exposed to untenable living conditions due to nearby industrialized hog farms.
First presented in 1999, the Defenders of Justice Awards honor those who have made significant contributions to North Carolina’s fight against poverty in four areas that reflect the scope of the center’s work: litigation, legislative and administrative advocacy, grassroots empowerment, and policy research and advocacy. Wallace won the litigation award.
The Justice Center is dedicated to transforming North Carolina’s prosperity into opportunity for all and has a mission to eliminate poverty in North Carolina by ensuring that every household in the state has access to the resources, services and fair treatment it needs in order to enjoy economic security.