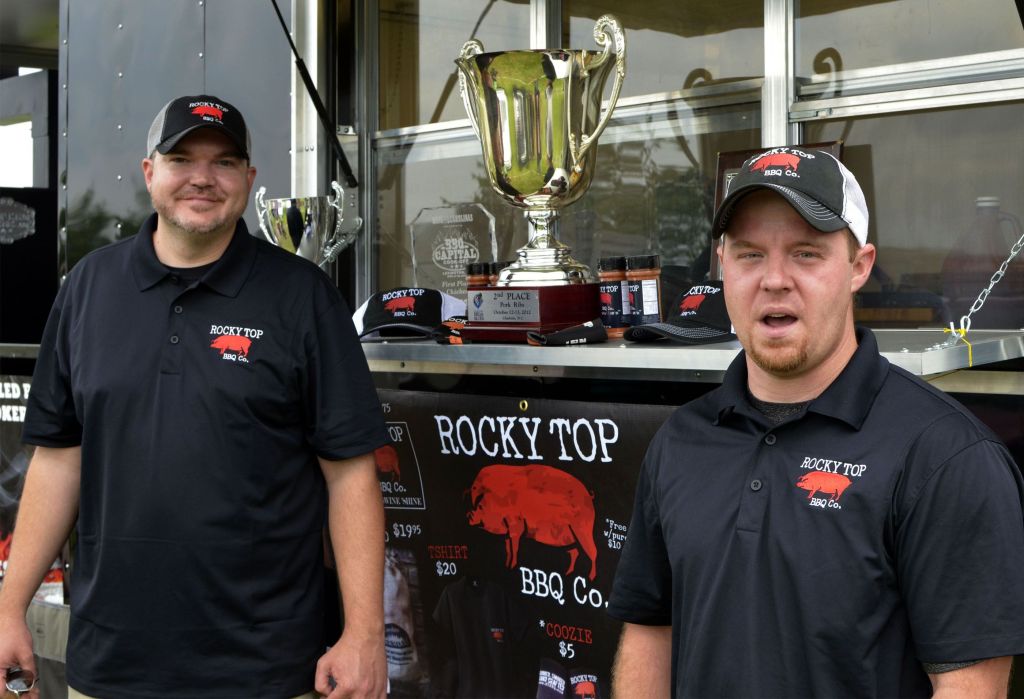 KANNAPOLIS – The sun shone, the thunder rumbled, but nothing stopped the people of Kannapolis from getting Jiggy this weekend.
The two-day Jiggy with the Piggy BBQ Challenge and the downtown Village Jiggy Jam street festival filled Friday and Saturday with activities.
The second-annual barbecue competition drew 81 cook teams from as far away as California and Mississippi, plus all of North Carolina’s bordering states, organizer Eddie Smith said.
Smith, deputy city manager of Kannapolis and himself a certified Kansas City Barbeque Society judge, helped create the event in 2013.
Among other things, Smith has attended BBQ Jack’s Old South Pitmaster School in Vienna, Georgia, hosted by Myron Mixon, judge on TV’s “BBQ Pitmasters.”
“The turnout was great. The teams have been very complimentary of Kannapolis,” Smith said.
And the competition, by all accounts, was tight.
Teams compete at sanctioned barbecue competitions much the same way that NASCAR drivers compete in a race series.
At each sanctioned event, teams can earn points toward victory, or toward participation in an end-of-season championship.
Teamed worked through the night Friday into the early hours of Saturday morning, cooking beef brisket, ribs, pork butts and chicken.
A thin haze of woodsmoke hung over downtown at times as the teams worked their magic.
Throughout the morning and early afternoon Saturday, teams rushed to turn in their entries.
There was a separate judging event Friday for wings, baked beans and desserts, with guest judges picked from among local business leaders and elected officials.
The public could also have their say, with fundraising competitions held Friday and Saturday.
Saturday, the line for the People’s Choice barbecue judging stretched almost halfway down the block, as people waited their turn to enter the former Cabarrus Bank building on West Avenue.
Those who donated $10 got to sample 10 teams’ barbecue, and could cast their vote for their favorite.
Brad Bolyard, of Concord, said he came to last year’s Jiggy with the Piggy, and enjoyed it so much they invited their neighbors to come with them.
In their group, one pan of barbecue was the far-and-away favorite: “Sweet with a little heat,” Bolyard said.
Friendly discussions over favorite kinds of barbecue and sauce were heard throughout the room.
The best barbecue, according to Eric Penninger, of Concord, is vinegar-based, “down east” style.
One such entry in the People’s Choice “beat anything I’ve ever tasted,” Penninger said. This was his first time at Jiggy with the Piggy.
Several of the teams in Kannapolis this weekend have been featured on television.
In fact, Saturday evening, Rocky Top BBQ Co. made its first appearance on TV’s “Barbecue Pitmasters,” on cable channel Destination America.
Rocky Top BBQ Co. is comprised of Graham Young, Jonathan Upchurch, Brandon Burgin, Steve Carter and Bob Henderson.
Young said the team was chosen from over 300 audition tapes submitted by cook teams around the United States.
Upchurch said the team has been competing at events like Jiggy with the Piggy for five years now.
They’ve also started a catering business based on the success of their competition barbecue, Upchurch said.
Team members were quick to compliment the organization of Jiggy with the Piggy.
“This is probably going to be a world-class event in the next couple of years,” Upchurch said. “Kannapolis has a great thing going.”
Tommy and Lisa Houston’s team, Checkered Pig, has also been featured on “BBQ Pitmasters.”
They’ve been competing since 2004 — since before competition barbecue became such a hot ticket, Tommy said.
They also praised the organization and the setup of the event.
“For a second year competition, to have 80-some teams? (Smith) has done a great job,” Tommy Houston said.
Friday and Saturday was filled with events in and around Kannapolis.
The N.C. Music Hall of Fame held its annual Rhythm & Run 5K race, a fundraiser for the downtown Kannapolis museum.
Kannapolis Parks and Recreation partnered to show a movie on the lawn of the Research Campus on Friday evening, once the rain showers subsided.
Saturday, a smaller version of the monthly Kannapolis Cruise-In took place along North Research Campus Drive.
And live music, food and vendors filled West Avenue for the Village Jiggy Jam itself.
Brenda Drye, of Cabarrus Events Association, said the turnout was “spectacular.”
Village Jiggy Jam, previously known as Village Fest and Cottonstock, is an annual tradition for Mother’s Day weekend in Kannapolis.
Drye estimated total turnout for all the weekend’s events at near 10,000 – including the barbecue competition and 5K race.