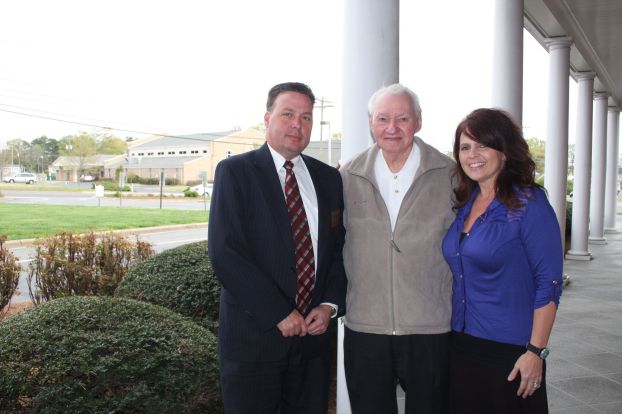 KANNAPOLIS — When Jane Whitley Denson’s aunt died in September, her uncle told her, “This is going to be a Whitley service.”
“We all worked it,” she says of herself and her three older brothers. “He asked us, and we said yes, sir.”
For more than 100 years, Kannapolis residents have expected “a Whitley service,” and that’s what the funeral home has provided. Like similar businesses, it started as a furniture store.
Bill Whitley’s father joined H.B. Wilkinson in business, and later spun off into a funeral home. It was the first funeral home in downtown Kannapolis, and was in fact named “The Funeral Home” for many years.
The funeral business tends to be a little busier in winter months, Bill says, but you just never know.
“We may go two or three days without anything happening,” Jane says. “In recent years, we have had more deaths in November and December.”
Bill was studying to be a doctor at Duke University when World War II broke out. His brothers, Ralph and Fred, later went into different businesses.
When Bill returned home, his father asked, “If you don’t mind, how about staying with me for a year or two?”
“I just stayed and stayed,” Bill says, “and in 1970, I bought him out.”
Bill had grown up in the family business. “When I was 12 years old, I was putting up grave tents and helping to dig graves. You worked back then, you didn’t loaf.”
When he was just a little older, Bill even went with his father to homes to help him embalm bodies, as was customary at the time.
All of Bill’s four children worked at the funeral home when they were in college. Son Whit had been studying to be a dentist, but joined his father in 1971. Son John became a neurosurgeon, and practices in Fayetteville. Son David studied to be a P.E. teacher before joining his dad. Jane received a business degree from UNCC. She’s now the pre-need manager.
“I don’t think any of us had any idea of how our careers would unfold,” Whit says. His grandfather was a huge influence on him, he says, so he decided to join the family business.
When Jane received her funeral director’s license in the mid-’90s, there were still more men than women in the business, although there are more female funeral directors now.
“I’ve always been comfortable in it,” she says.
“You get absorbed in families and their own situations,” Bill says. “Back when Kannapolis was small, you knew so many families personally.”
Father and daughter are extremely proud of the fact that Whitley’s is still a family-owned funeral home.
“We just tend to give more of a personal touch to our customers,” Jane says. “People remember that.”
Even with a staff of 23 full-time and part-time employees, Jane says, “You still have people who want a Whitley.”
Jane says that the funeral home tries to help families however it can. “That’s what brings them back.”
“What makes us such a strong organization is our employees,” Whit says. “Without our dedicated employees, we would not have what we have today.”
Jane says that knowing families personally is hard, but that they treat all families the same. “They know we have a job to do. We’re still friendly, and we’re still sincere. We can kind of gauge a family. Sometimes people get very emotional. Sometimes they don’t fully understand what we tell them. They don’t always remember what we said, so sometimes they’ll call back and ask questions.”
Working with families during such an emotional time can be challenging, especially when there are issues within a family.
She adds, “We stay very neutral with families. You try to diffuse any situation you can.”
“You can’t imagine what we’ve experienced,” Bill notes.
Still, Jane says, “I like meeting people. Sometimes they want to just come and talk, which is fine. I’m a talker.”
“They’ve brought us cookies and candies,” Bill says. “They make us feel so humble.”
Bill and his wife, Johnette, have been married 65 years. She is in an Alzheimer’s care unit, but the family is able to take her on outings from time to time. A registered nurse, she worked at the funeral home for many years as secretary/treasurer.
“We’re going through a hard time,” says Bill, 91. “It’s not easy. It’s harder on the caregiver than on the patient.”
The Whitleys have 14 grandchildren and three great-grandchildren. Jane says she hopes at least one of her six children will follow her in the family business.
“They’ve all been around it,” she says.
When Jane was growing up, she remembers that her mother had dinner on the table by 6 every evening, since there were usually visitations from 7 to 9. Her dad always wore his suit at the table, and sometimes didn’t even take off his jacket.
Even though Bill is losing his vision, he still comes by from time to time, he says, to “pester” the staff. He loves watching sports on TV and classifies himself as a “Duke crazy.”
“I’m a charter member of the Iron Dukes,” he notes. “We have season tickets for basketball. We’ve had those for years.”
The Whitleys all have interests away from work. Jane keeps busy with her children, while David enjoys golf and Whit writes screenplays.
Freelance writer Susan Shinn lives in Salisbury.

SALISBURY — As they trace rocket ships, flower bouquets and other patterns with little wooden shapes, the 4-year-olds in Kimberly McGraw’s... read more