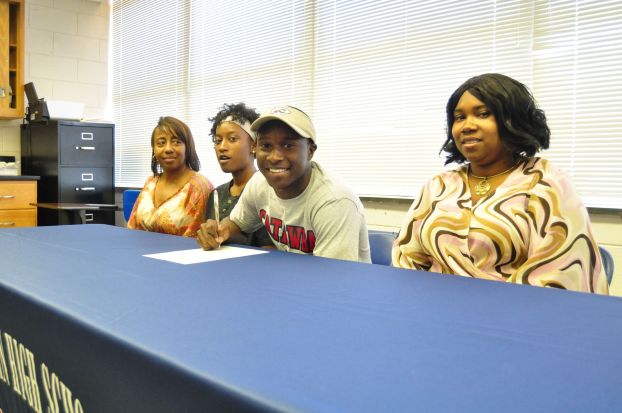 GRANITE QUARRY — When East Rowan senior Donte Means jumps, people take notice.
“He leaps like a cartoon character,” said East’s football defensive coordinator Jason Barnes. “That’s a 37-inch vertical jump Donte has. Pound-for-pound, he’s the best athlete I’ve coached at East — or anywhere else.”
It would be nice if Means had more inches and more pounds to work with, but even at 5-foot-9, 165, he’s one of the best athletes in Rowan County’s talented senior class.
He’s an A’s-and-B’s student on top of the things he’s accomplished athletically in football, basketball and track as a year-round athlete, and he’ll continue his football career at Catawba.
Catawba announced Means as a signee on May 1, bringing this year’s recruiting class up to 28.
Means was there for Catawba’s Spring Game, standing just outside the postgame huddle, and listening intently as coach Curtis Walker spoke to the troops.
“It’s a good school, I had a good visit, and it’s the place where I want to be,” Means said. “I’m impressed with Coach Walker. I appreciate that Catawba is giving me a chance.”
Means is a first cousin of Natrone Means, who rumbled out of Central Cabarrus and UNC to roll for 5,215 NFL yards and 45 TDs for the San Diego Chargers and Jackonsville Jaguars in the 1990s.
Natrone was only 5-10, but he weighed 245 pounds at his peak.
Donte won’t ever have that kind of size, but it’s not hard to see he’s from the same gene pool. He’s quick, fast, tough and strong for his size.
Means was East’s leading scorer in basketball his last two seasons, frequently carrying the offense. He averaged 11.0 points per game as a junior and 14.9 as a senior.
In football, Means had a series of highlight-film moments as both a defensive back and a kick returner.
In track, he placed second in the SPC Championships in the long and triple jumps and he ran on East’s 4×100 and 4×200 teams that took conference titles. That 4×200 team, which also includes Josh Little, Josh Moses and Calvin Edwards, won the Midwest Regional on Saturday.
“Donte has always had amazing footspeed and he’s thrown down some nasty dunks in practice,” East basketball coach Trey Ledbetter said. “Then his junior year, he started getting in weight room. He still looks like a small guy, but he can do things that don’t make sense. We’re looking for big things from him at Catawba.”
Means has similarities with 5-8 Trey Mashore, a former West Rowan star who contributed at Catawba on offense, defense and special teams before settling in at running back.
Means’ best chance to play early at Catawba will be as a kick returner, but he also figures to add depth to the defensive backfield.
Means has big-play capabilities. As a junior, he returned an interception 43 yards for a touchdown against West Iredell. He had a 98-yard return of a the opening kickoff against South Rowan, and against West Rowan he made one of the plays of the century for the Mustangs when he produced a 65-yard pick-6 in a monumental victory.
“That’s the play I’ll remember from high school,” Means said. “That’s the night we ended West’s long (44-game) county winning streak. It’s a good memory.”
It’s also the play that Barnes remembers when he looks back on Means’ time as a Mustang.
“That interception against West — he planted, he broke on the ball, he did everything just like he’d been taught to do,” Barnes said. “And then he had the speed to take it back all the way.”
As a senior, Means caught a 76-yard TD pass against Concord and turned in another kickoff return TD against South. Yes, the Raiders will be happy to see Means graduate.
But those runbacks and picks are the past now, and Means is focused on his future — including life after football. He plans a career as an allergist and will major in biology at Catawba.
“There’s no doubt in my mind he’ll excel on the field and off,” Barnes said. “He can make an impact.”