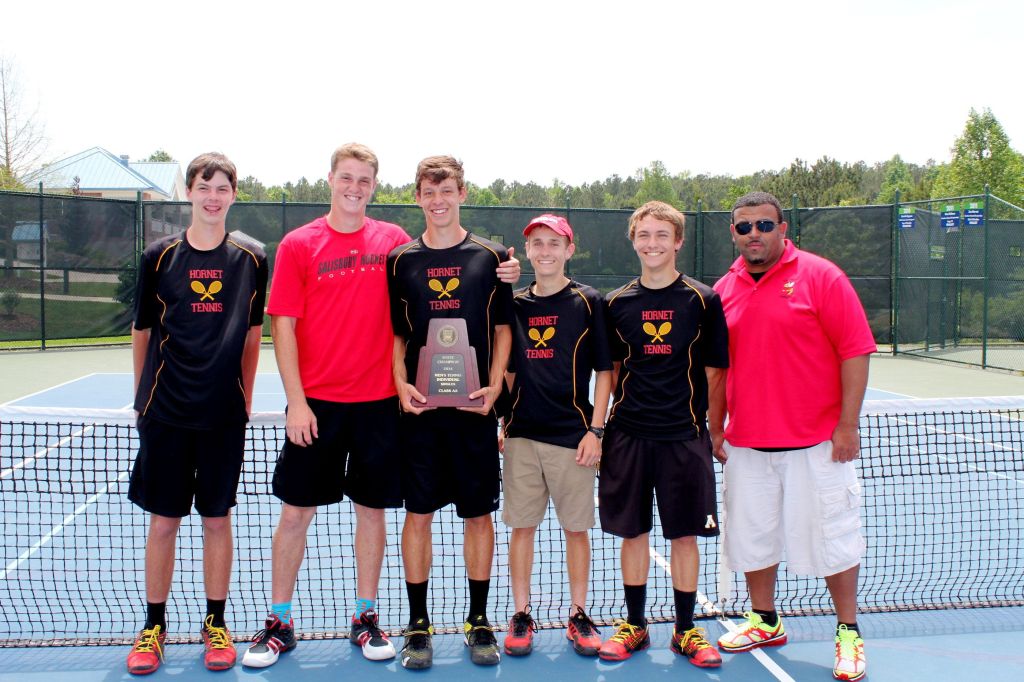 CARY — Michael Ogden’s lunch consisted of a half-pound cheeseburger with everything on it, and he deserved every morsel.
Ogden earned his hearty celebratory meal after a busy morning. The Salisbury junior dominated his way through the state 2A championship match to capture his second crown in three years Friday at the boys’ tennis championship at Cary Tennis Center.
With most of his teammates cheering him on after a grueling semifinal, Ogden rolled the championship match, beating Hendersonville’s Jacob Fuqua 6-1, 6-0
Fuqua was the reigning 1A champion, but Hendersonville moved up a classification this year.
“I felt like I was on top of my game,” Ogden said. “I was serving really well and not giving the other guy anything.”
Ogden also won state his freshman year, when he was the first SHS player to win a singles title since Eric Saunders in 1993.
“It’s a different feeling from when I first won it,” Ogden said. “It feels incredible.”
In the 9 a.m. semifinal, Ogden outlasted Carrboro’s Brian Freiburghouse 6-4, 7-5 after an hour and a half. Ogden played Freiburghouse in a USTA Tournament a few years back and never trailed on Friday.
“I knew the guy and he’s a good player,” Ogden said. “Both of us played well. I feel like my experience helped me pull it out. I mentally pulled it out at the end.”
The SHS doubles team of Clint Comadoll and Spencer Storey were defeated in the semifinals by Carrboro’s Max Fritsch and Jake Zinn 6-2, 6-0. Fritsch/Zinn beat the North Lenoir tandem of Evan Kramer/Will Hardy in the championship 6-2, 6-0. Comadoll and Storey were both all-state. Comadoll was also all-county in football and soccer.
The Hornets bowed out of the dual team playoffs Tuesday in a 5-1 loss at Brevard.
“I wish we could have pulled it out in the dual teams, but it was a great season,” Ogden said.
Salisbury finished the year 16-1, going unbeaten in the Central Carolina Conference again.
“In the finals Michael was phenomenal,” Salisbury coach Milton Griffith said. “He had kind of a stomach virus this morning so I think he was off for the semifinal. Then in the final he was just awesome.”