North, Salisbury compete in 2A track 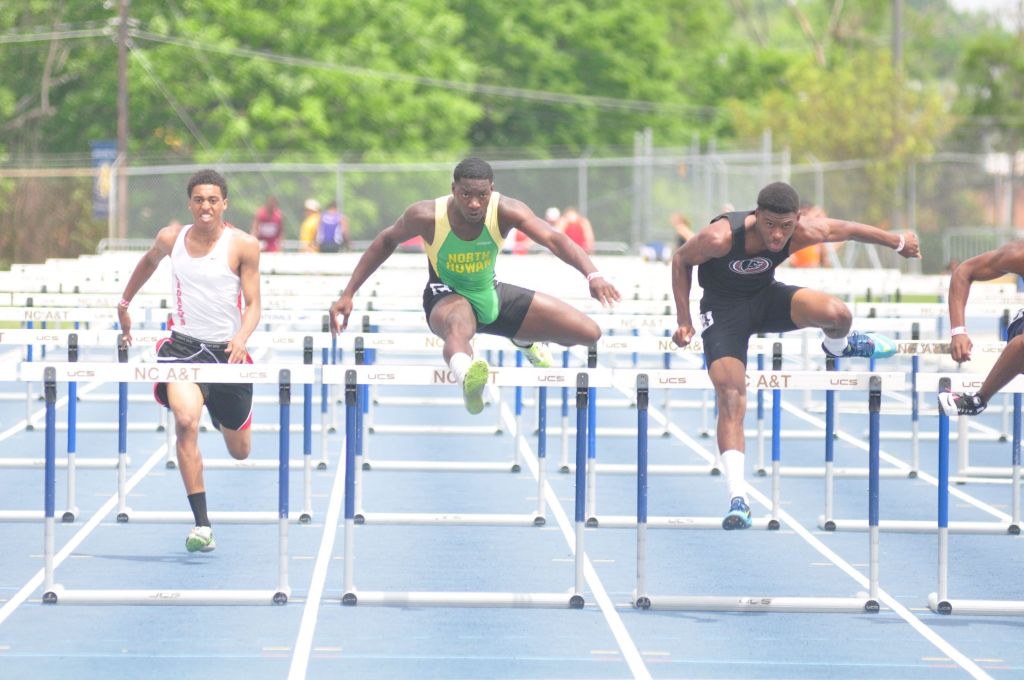 GREENSBORO — Rowan prep fans are used to Salisbury and North Rowan winning state championships in track and field.
Although both schools have seen their share of athletic success this year, neither school brought a busload of kids to compete for the top spot, but there were several notable performances. North’s boys, state champions in 2010 and 2011 and third-place finishers last year, didn’t make a huge dent this year in the team standings but held their own in the sprints and high jump at Irwin Belk Track on the campus of N.C. A&T.
Shareef Walker’s fourth-place performance in the 110-meter hurdles and Payton Russell’s fourth place in the 200-dash guided North Rowan, and Salisbury’s Keance Miller had a top-10 finish in the discus throw.
Walker ran the 110 in 15.03 seconds, narrowly missing third, taken by Bunker Hill’s J’Len Wilson. The junior was fifth in the prelims, running about his average time — 14.96 is his personal best.
“There were a couple of things I could have worked on like pulling my trail leg up a little more,” said Walker, who was running in the state for the first time. “Other than that, I feel like I did pretty good.”
Salisbury, which won consecutive boys titles in 2009-2010, was led by Philip Simons’ sixth-place finish in the 800. Miller was ninth in the discus, throwing 134 feet, 10 inches.
“Keance really came on strong at the end of the year,” Salisbury coach Ryan Ochier said. “He started throwing really well at the conference championship meet.”
Salisbury’s Cheyenne Gloster was seeded second in the discus after finishing third last year. Gloster, who set a state record earlier this year with a throw of 142-10, scratched twice and managed to record just one throw of 77-4.
“It was really unexpected,” said Gloster, who signed with Winston-Salem State. “I was using new throwing shoes when I’ve been using regular sneakers for the past six and a half years.”
One of her throws was ruled to hit the out of bounds line, nullifying what would have been a throw good enough to reach the finals.
“It was right in the sector but whatever the official says goes,” Gloster said.
North’s Kenyon Tatum, Central Carolina Conference champ in the high jump, placed fifth after jumping 6-3. Anyone who’s seen a North basketball game wouldn’t doubt his leaping ability nor agility. Tatum then jetted off to get ready for prom.
“He didn’t trust himself,” North coach Phillip Bush said. “He usually clears 6-4 but couldn’t get it together today.”
The freshman Russell also qualified in the 400, where she finished fifth (59.38) and the 100, where she was sixth (13.09).
“She’s got a chance to be really good,” Bush said. “By the time, she’s a senior, look out.”