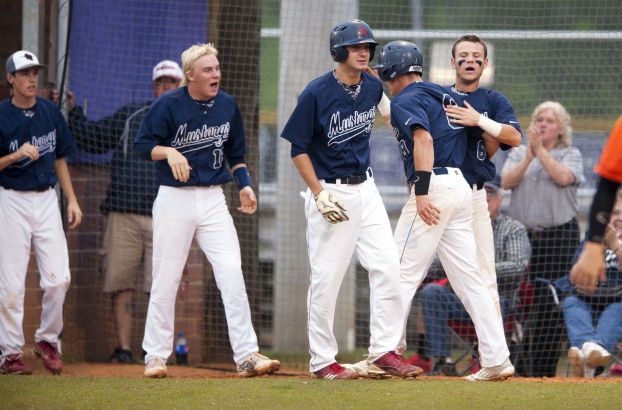 CONCORD — East Rowan reliever Joseph Peeler ended Friday’s SPC tournament championship game with a strikeout and flung his glove skyward.
If that seems like excess emotion for a game that decided a trophy but had no bearing on the upcoming 3A state playoffs, well, you probably don’t follow neighbors East and Carson.
“I was pretty happy and pretty excited because it was a championship and it was Carson,” Peeler said. “When it’s Carson, it’s crazy.”
It’s mostly been crazy-good for East, which beat the Cougars for the 19th time in 20 tries.
East rallied for three runs in the sixth to win this one. Michael Caldwell’s sacrifice fly scored Mason Doby with the decisive run, and Peeler pitched a 1-2-3 seventh.
“This team is starting to believe in itself,” said East coach Brian Hightower, who watched his team pull out his 200th win in his 10 seasons in Granite Quarry. “We say it every year — that the sixth and seventh are our innings — but I think this group believes it.”
Carson players, meanwhile shook their heads in disbelief.
“It’s a hard loss to digest,” Carson junior Heath Mitchem said. “We played one of our best team games all season. We were in control, but we just didn’t finish.”
Second-seeded Carson is 21-6 but all six losses have been to Rowan rivals, and the Cougars are 0-3 against top-seeded East.
Carson lost just once in the month of April and had won 17 of 19 outings before running into East again on Friday at Cox Mill.
“This one hurts, it hurts us bad, because we had something to prove,” Carson coach Chris Cauble said. “(Connor) Johnson was able to pitch the other two games for them (because of rain), but he didn’t pitch this one.”
Carson has three No. 1 pitchers, but ECU-bound Colton Laws (5-2) has the best numbers. He got the ball against East’s No. 2 hurler Chase Jarrett (5-1).
Laws dominated in stretches, striking out the side in the second and fourth and fanning 10.
But even his strikeouts weren’t easy, as East hitters usually worked deep counts. Laws walked five, threw a ton of pitches and was lifted after five innings with the Cougars leading 2-1.
Jarrett, who walked five and hit two, was in trouble almost from his first pitch. Still, he battled through jams and kept his team in the game. Carson wound up stranding 10 baserunners.
“We left a bunch in scoring position,” Cauble said. “That will hurt you against the good teams, and then we had that one bad inning (the sixth) defensively.”
Mitchem scored for Carson in the first when the Mustangs made a throwing error trying to finish off a 4-6-3 double play.
East’s Samuel Wyrick singled home Luke Setzer for a 1-all tie in the second.
Carson small-balled for a go-ahead run in the fourth. John Patella’s sac fly made it 2-1. The Cougars were inches from blowing it open, but John Daugherty’s bases-loaded liner to right was chased down by Ty Beck.
Jarrett was in a mess again in the fifth when Hightower visited him with one out and two on.
“He looked really tired,” Hightower said. “We’d never gone as far as we did with him tonight, but he’s a senior and this was one in his hands. He’d earned the chance to pitch out of it and he made us all look good.”
Jarrett struck out two straight, and East’s deficit stayed 2-1. Peeler (2-3) took the ball to start the sixth, and Carson scratched another run when Austin McNeill was hit by a pitch, stole second, took third on Patella’s bunt and scored on Mitchem’s groundout.
Daugherty (5-2) replaced Laws for the East sixth. Scott Sapp walked, and then things unraveled for Carson. An error put two on, and then Mason Doby bunted.
“I had the green light to hit the first pitch, but I didn’t like it,” Doby said. “Then I got the bunt sign.”
It was a good bunt toward third. Matt Saul charged on the wet grass and had to hit a moving target — second baseman Patella — who was racing to cover first.
The throw sailed away, and East trailed 3-2. Seth Wyrick followed with a liner to center. Michael Morrison made a dive but couldn’t make the play, and it was 3-3.
Then Michael Caldwell’s sac fly to right scored Doby and put East ahead 4-3.
“Colton was really good tonight,” Doby said. “But in the late innings, we just seem to turn it on.”