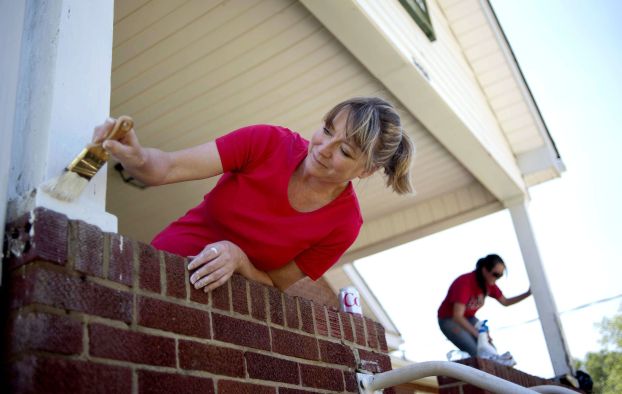 CONCORD — Just about wherever you looked on the Church of God Children’s Home campus on Thursday, there were red shirts.
The enthusiastic group was from Keller Williams Realty. With offices in Rowan and Cabarrus counties, the company sponsors a volunteer day each year, alternating at locations in the two counties. This year, the staff chose to work at the children’s home.
And work they did.
“We dug lots of holes and planted lots of flowers,” said Danny Phillips, a Realtor in the company’s Kannapolis/Concord office. This was his first year with the project.
“I thought it went great,” Phillips said. “Any way we can give back to the community is a great thing.”
During the day on Thursday, some 35 Keller Williams employees gave back by doing landscaping, as well as mowing, painting, sanding and generally sprucing up two of the six homes on campus.
Judy Simmons, a team leader at Keller Williams, led the effort.
In its fifth year, Red Day volunteers in Rowan and Cabarrus counties have worked at Hospice, Opportunity House, Landis Elementary School and Capstone Ministries. Next year, they’ll be scouting out a Rowan County location. The companywide event takes place annually on the first Thursday of May. The agents choose where they’d like to work. The projects are funded by the agents, who accept donations as well.
Jerry Bentley, a local home inspector, provided a barbecue lunch for the group. One of six boys, Bentley lived at the home for 12 years after his parents were killed.
Simmons arrived early on Thursday morning, and some agents were already there, ready to work. Activities were scheduled to end at 4, Simmons said, but “I’ll stay here ’til everything is picked up.”
Simmons goes into many houses, she said, and praised the home-like atmosphere of the houses on campus.
“I walked in and felt at home immediately,” she said.
Like at any home, there were toys on the front porches. At one cottage, a Big Wheel, and a small bike with training wheels sat waiting by the front steps for the children to come home from school.
Realtor Drew Maher spent the afternoon painting and putting light fixtures back on the wall. This was his first Red Day.
“I actually grew up right down the street,” Maher said, “and this is my first time ever in here. You get a real good perspective being here. I was excited when I learned what the philanthropy was going to be.”
Maher and others repainted the spacious living area in Maple cottage. By the end of the day, the walls were painted a neutral cream color.
“It looks great,” Simmons told her co-workers. “It looks really, really good.”
Amber Lube was on Keller Williams’ planning committee for the event. She met with children’s home officials, and went to pick up supplies for the volunteer days, as well as items on the home’s needs list.
“I knew there were multiple things to get done,” she said, adding that’s what she was looking for in a location, since she had such a large cadre of volunteers.
Mitzi Crane, who lives in Salisbury, went “just to be helpful.”
“It’s been fun,” she said. “I’ve been mainly doing yard work all day. That’s the reason we are filthy!”
Crane wasn’t exactly filthy, but she did laugh at her grass-stained jeans. The day lilies, coleus and begonias did certainly brighten up the lawn at Maple cottage.
Kelly Lowe and his son Jonathan, a student a Liberty University, spent the day mowing the campus’ expansive lawn.
Others didn’t mind the paint stains, or grass stains, or dirty hands.
“Realtors like to stay busy,” Simmons notes. “They’re not gonna sit around.”

Your daily look at late-breaking news, upcoming events and the stories that will be talked about today: 1. RUSSIA MARKS... read more