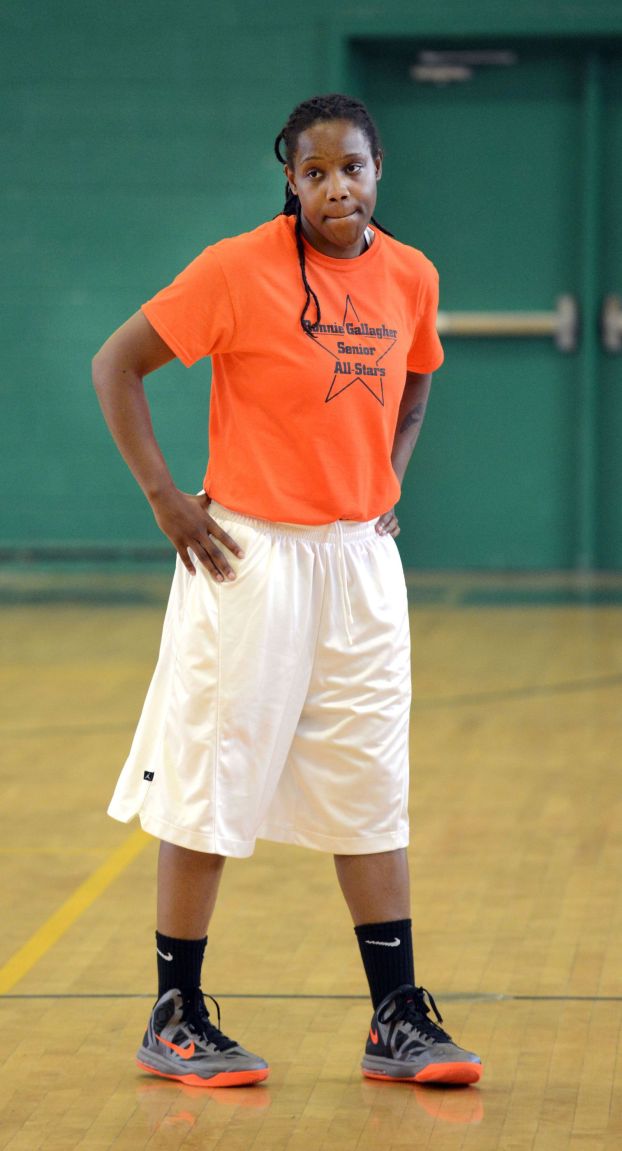 Fields shows she’s still got it

SPENCER — It’s been more than a decade since Shayla Fields drained her last basket for Salisbury High’s girls basketball team, but she still enjoys an evening in the spotlight now and then.
She found it again Friday night, when her behind-the-scenes effort helped the Ronnie Gallagher Memorial Senior All-Star game go off without a hitch at North Rowan.
“Really, we were just trying to showcase the game and help everybody have some fun,” Fields said after her Orange/Black team hung on for a 65-58 win against Brielle Blaire’s White team. “It’s mostly for the love of the game.”
Fields — the first lady of girls basketball and Rowan’s all-time leading scorer — provided some last-minute recruiting and agreed to serve as a coach.
“There were only 11 seniors in the county this year,” said event coordinator Andrew Mitchell. “That bodes well for next year, but it didn’t help us trying to get people to play in the All-Star game.”
It was early this week when Mitchell contacted Fields, an assistant coach at Livingstone College, seeking help. She agreed to play and enlisted LC players Clintoria Bryant, Kelcyn Manners and Lameka Davis to fill roster spots.
By tipoff the game had morphed into a team of current seniors — East’s Karleigh Wike, North’s Nyceiko Dixon and Carson’s Kate Cole and Megan Gray among them — against Fields and a group of gone-but-not-forgotten alums.
“This was it, our last Rowan County game,” said Dixon, the ray of sunshine who knocked down seven 3-pointers in a losing cause. “And they’re like graduates. They’ve got a little more experience than us.”
Even Wike, the Richmond-bound forward who flashed just a bit of her signature swagger, left with bright smile.
“It was neat to play with people that you’ve always played against,” she said.
People like Dixon? “Yes,” she quickly answered. “Whenever we got the ball inside, it was good to know we could send it out to her for a three. It was really convenient to be on her side instead of playing against her.”
Orchestrating the evening was North assistant coach Tim Bates, who served as ring announcer. Armed with a microphone, he kept the enthused crowd entertained with humorous quips and comments. When Fields missed an open layup in the first half, he shrieked, “Aaaaahhhh! Ten years ago she woulda made it.”
Of course, it elicited a cascade of laughter and set a tone for the rest of the match. Fields continues to the treat the court as her canvas, making the most difficult shots with utmost creativity. made up for it with a rainbow 3-pointer from the right corner that put the Orange/Black squad up 28-20 at halftime. And late in the game her baseline drive from the left side produced a layup that silenced a White team rally.
Proceeds for the event were set aside for the Gallagher family in honor of the former Salisbury Post sports editor who died suddenly last Aug. 30. Carson coach Brooke Misenheimer said Gallagher “elevated the standard for high school sports coverage,” and added: “It got to the point where we expected it. I don’t think we realize that other counties don’t get nearly the coverage we do. But we expect to open the paper on Saturday mornings and see pictures of all the games and great stories written. He made us feel special.”
Fields called Gallagher a “fun-loving guy who loved his job.” Blaire lauded his head full of ideas and Dixon spoke of seeing him on campus. “I loved him,” she said. “When I was at West I had a class with Coach (Mike) Gurley and he would always drop by. He was after everything — a story and a laugh.”
Perhaps former Salisbury standout and current Gardner Webb player Jessica Heilig said it best. “I remember every time he interviewed me he’d say, ‘Wow, Jessica Heilig! You had a great game.’ Even if I’d had an ordinary game, he’d make me feel good. He was just a nice spirit to be around.”