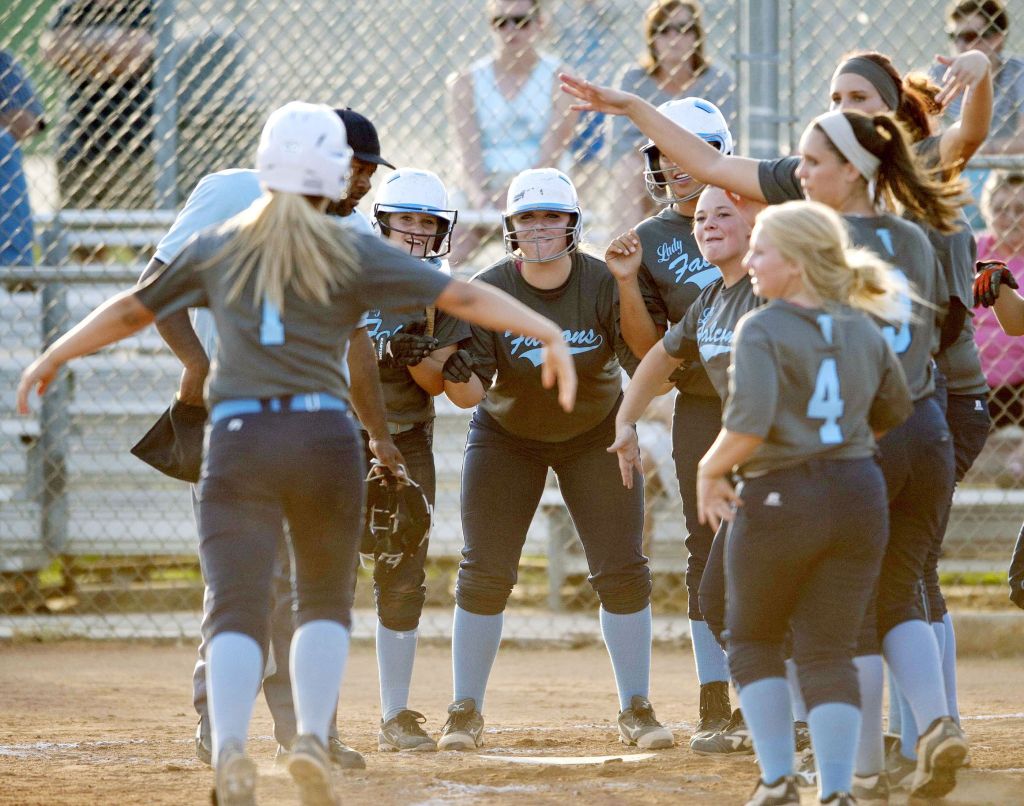 HARRISBURG — Cleaning the uniforms of West Rowan’s up-the-middle infielders will require an extra dose of detergent after Thursday’s game, but pitchers Peyton Greene and Leah McCoy appreciated their effort.
Second baseman Taylor Martin and shortstop Hunter Gibbons made five outstanding plays between them, and the Falcons rolled 8-3 against East Rowan in the SPC tournament championship game.
“Those two were on tonight offensively and defensively,” winning coach Jimmy Greene said. “I see Hunter a lot, obviously, but she made a diving play tonight that impressed me. It was big-time.”
With both teams playing a long way from home at Hickory Ridge, West (17-5) easily tacked on the tournament title to its SPC regular-season crown.
“It’s big to win both,” Coach Greene said. “Because these girls haven’t won. West hasn’t won anything in softball in seven years.”
The season ended for seventh-seeded East (10-11), which surprised No. 2 seed Central Cabarrus and No. 3 Hickory Ridge to reach the championship game.
“We played two good games to get here, but tonight we hurt ourselves a lot,” East coach Mike Waddell said.
East scored in the first when Kaleigh Troutman’s hot liner deflected off third baseman Brianna Turner’s glove and scored Bree Medlin.
West went down 1-2-3 in the first against East hurler Taylor Merritt, but the Falcons’ seven-run second decided the game.
“I wasn’t really worried down 1-0,” said Gibbons, a junior who has committed to N.C. State. “We should beat East. We can beat anyone when we relax and put out minds to it.”
Greene doubled to the wall to start the second, and Cat Whitley’s bunt and a walk to Turner loaded the bases with one out.
“Hitting is contagius,” Peyton Greene said. “It’s very common for us to put together a rally like that.”
Merritt didn’t get a crucial call on a changeup and wound up walking Cassidy Nooner to force home a run, and it was 1-1.
A throwing error when East had a routine forceout at the plate made it 2-1, and then Martin, West’s leadoff batter, nailed a pitch deep down the right-field line.
“It was a changeup, and I did what we’ve been taught to do — I kept my hands back,” Martin said.
Two runs scored easily. McCoy running from first had Martin breathing down her neck by the time she rounded third. McCoy put on the brakes and scampered back to third base, and East should’ve gotten an out in a rundown. Instead, another throwing error allowed McCoy to score and made it 5-1.
“Things just got out of control on us in that one inning,” Waddell said.
Medlin relieved Merritt. Gibbons said hello with a drive over the left-field fence for two more runs to cap the huge inning.
“They changed to a faster pitcher, but she threw me one right down the middle,” said Gibbons, who launched her ninth homer.
Martin has seen a few of those, and she knew it was gone at the crack of the bat.
“That was a bomb,” Martin said. “When that one left Hunter’s bat, I started jogging.”
A soft single by Martin scored Whitley with West’s final run in the third. After that homer by Gibbons, Medlin pitched well.
“We did most of it in that one inning, but we’ve had a big inning like that in most of the big games that we’ve won,” Coach Greene said.
Peyton Greene pitched five innings, struck out three, walked one and allowed two runs. When East slugger Troutman belted her eighth homer leading off the sixth, McCoy relieved Troutman and finished up.
Gibbons added to her diving stop in the fifth with a good backhand play in the sixth, and Martin, who already had robbed East of hits twice, turned a groundball into a 4-3, tag-and-throw DP.
Troutman had two of East’s five hits. Martin, Gibbons, Greene and Whitley had two hits each for West.
“East scared me going into this game,” Coach Greene said. “They’d gotten hot at the right time, and you always worry that. It was different playing East down in Cabarrus County, but I was really proud of how well the girls played.”
Playoff pairings will be announced Monday. West, Central Cabarrus, Hickory Ridge, Cox Mill and Carson will represent the SPC in the playoffs that start Wednesday. An East win would’ve knocked Carson out of the playoffs.