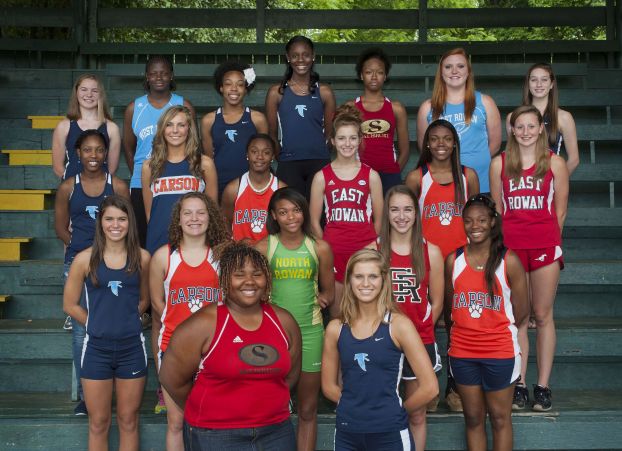 East Rowan and Carson will play for the SPC tournament championship at Cox Mill tonight at 7 p.m.
East (19-7) won both regular-season meetings with the Cougars (21-5).
Carson is expected to use Colton Laws on the mound tonight, and the Cougars will see a different pitcher. Connor Johnson, who pitched Wednesday’s 1-0 semifinal win for East, pitched both regular-season games against Carson.
Chase Jarrett is the probable pitcher for East.
• Reagan beat West Forsyth 3-2 in Thursday’s CPC championship game at Davie.
• Fourth-seeded A.L. Brown lost 6-2 to top-seeded North Meck in the MECKA baseball semifinals on Thursday. at Hough.
Trace Hagler pitched well for the Wonders, and Kameron Sherrill scored both runs.
UNC signee Ryder Ryan pitched for North Meck.
Hough beat Robinson 10-5 on Thursday in the other semifinal.
• Chandler Simmerson pitched West Davidson to a 3-2 win against East Davidson in Thursday’s CCC championship game in Tyro.

Middle school baseball
Erwin won 4-3 against China Grove.
Will Brown was the winning pitcher. Brown also homered to lead off the game. Chandler Antosek, Hayden Setzer, Mathew Mathis, Corbin Moss and Jax Fitz had two hits apiece for the Mustangs.
• In a 10-2 win against Knox, Setzer pitched five innings for the win, and Trevor Scruggs finished.
Brown led the Eagles offense with three hits including a two-run homer and a double. Matthew Mathis had two hits. Setzer also homered.
• West Rowan finished the regular season with a 15-0 win over China Grove.
Dillon Simoson had two hits, including a long homer. Owen White was the winning pitcher.
The Bulldogs will start play in the conference tournament on May 17.

Middle school tennis
Knox defeated Erwin 6-3 on Thursday.
Singles winners for the Trojans were Simon Post, Roarke Burton, Cole Goodnight and Cristian Gonzalez. Doubles winners for Knox were Post-Goodnight and Burton-Gonzalez.
Knox finished 13-1 and tied for first in the conference.
The NCHSAA 2A Championships are set for North Carolina A&T on Saturday.
Action in the field events will begin at 10 a.m. and running events will start at 11 a.m. It will be the 94th annual men’s championships and the 43rd annual renewal of the women’s event.
Monroe’s girls rolled to a convincing team victory in the Midwest Regional and will be a contender. Other regional titlists were Valdese Draughn, High Point Andrews and Newport Croatan.
Hiilsborough Cedar Ridge is the two-time defending champ for 2A boys.
The 2A regional team winners last weekend in men’s competition included Claremont Bunker Hill, Marshville Forest Hills, High Point Andrews and North Brunswick. Rowan regional champs were Salisbury’s Cheyenne Gloster in the discus and North Rowan hurdler Shareer Walker.
Admission to the championships is $8. The 3A and 4-A state meets will be held next weekend.
The 2014 North Carolina State High School Fishing Championship will take place on Sunday at Kerr Lake in Henderson, N.C., and is open to any team in the state.
The North Carolina state championship is a two-person event.
The NCHSAA boys golf championships will be played simultaneously at four different sites across the state on Monday and Tuesday.
South Rowan will compete in the 3A championships on the Grey Fox Course the Foxfire Golf and Country Club in Foxfire Village.
Salisbury will play in the 2A event scheduled for the Longleaf Golf and Country Club in Southern Pines.
The top three teams from each of the regionals along earned spots in the 36-hole championships.
The 3A event at Foxfire will be par 72 on a 6,669-yard layout. Longleaf’s set-up is par 71 and 6,591 yards for the 2A tournament.
Gastonia Forestview is the two-time defending team champion at the 3A level.
In the 2A classification, Newton-Conover took the team crown last year after Salisbury had won it all in 2012 and 2011.
The first threesomes will go off at eight a.m. on each day of the tournament in all four classifications.
Catawba announced the hiring of Jamie Williams as head cross country coach.
He comes to Catawba after serving as cross country and track coach at Salem College the past three years.
“We are delighted to have someone with Coach Williams’ experience and enthusiasm join us at Catawba,” Catawba president Brien Lewis said. “We anticipate a lot of excitement about the future of our cross-country program.”
Justin Seager (NW Cabarrus) had four hits as Clinton rallied from a 17-1 deficit after five innings to beat Burlington 20-17 on Wednesday.
• Tyler Barnette pitched Kannapolis to a 9-2 win at Lakewood on Thursday.

If you would be interested in placing a team in a weekend Fall Baseball League for middle school teams to be played at Salisbury High, email the following information to smaddox660@aol.com: Your name and team, along with a contact number.
Cost and other details will be given later in the summer once it has been established that there is enough interest to have a league. Middle school teams are preferred, but individuals will be allowed to form teams as long as the players don’t belong to a team in the league. Players must be rising 8th- graders or younger to participate. There is an eight-team maximum for the league.

Emma Labovitz scored for the Hornets in Wednesday’s 2-1 loss to West Davidson. Mary Seifert had the assist.
The Hornets are scheduled to start the 2A state playoffs on May 14. Playoff pairings will be released Monday.
Carson Junior Legion sign-ups are on Monday, May 12, at 6 p.m. at the Carson field. Anyone planning to try out should attend. Call coach Chris Cauble at the school for information.
There will be a 3-on-3 basketball tournament at Carson on May 31.
There are divisions for boys and girls and divisions for 4th-5th grade, middle school and high school. The cost is $30 per team. Theeadline to register is May 23.
Call Brooke Misenheimer at 704-855-5034 or Brian Perry at 704-855-5039.
The YMCA Warriors will compete Saturday in Gastonia. See Scoreboard for results on Warriors, Rowan Express and the boys middle school conference meet.