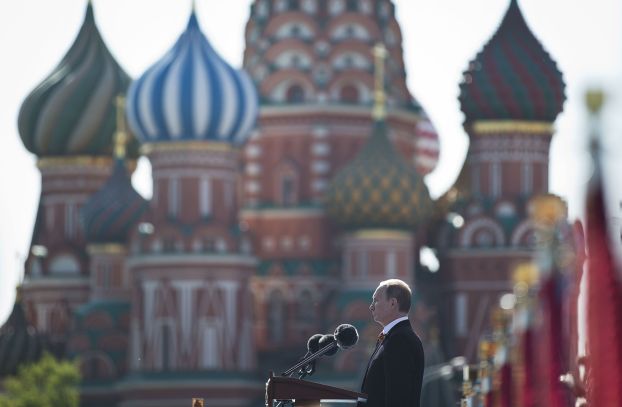 Your daily look at late-breaking news, upcoming events and the stories that will be talked about today:
1. RUSSIA MARKS VICTORY DAY WITH MASSIVE PARADE

Moscow shows off its military muscle to celebrate victory over Nazi Germany, at a time when the world’s attention is focused on the pro-Russian insurgency in Ukraine.

The Heisman Trophy-winning quarterback from Texas A&M went No. 22 to the Cleveland Browns.

3. HOW DEMOCRATS FEEL ABOUT BENGHAZI PROBE

With clear divisions, they are weighing whether to participate in a new investigation of the deadly attack on the U.S. diplomatic mission in Libya.

Police fire tear gas and water cannons to push back hundreds of protesters trying to force their way into a government compound.

In an interview with AP, Bartholomew I says a meeting with Francis in Jerusalem this month will help move the two churches closer to ending their nearly 1,000-year divide.

6. HOW ONE INMATE NEARLY EVADED A 98-YEAR TERM

A Colorado man who was released from prison 90 years early due to a clerical error has returned to serve the rest of his sentence.

7. WHAT VERMONT IS DOING DIFFERENTLY REGARDING FOOD

The Green Mountain state has become the first to require labeling of genetically modified organisms.

8. HOW RUBIO IS TESTING THE POLITICAL WATERS

The Republican senator from Florida is returning to the presidential campaign circuit and beefing up a political organization that could lay the groundwork for a White House bid in 2016.

In the country where the fire-breathing monster first stomped, fans wonder if the remake will be a tribute or an embarrassment to its legacy.

The NBA may want to install new ownership, but Shelly Sterling "will not agree to a forced or involuntary seizure" of her 50 percent stake in the team, her lawyers say.